What are the odds on Tom Waterhouse going the distance? 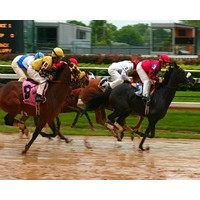 While the controversial ubiquity of online bookmaker Tom Waterhouse has received a great deal of media coverage, far less attention has been focused on the young scion’s business model. Will he last the distance?

The 30-year-old is the son of disgraced bookmarker Robbie Waterhouse (who was banned from racetracks for 14 years after his alleged involvement in the Fine Cotton scandal) and Gai Waterhouse, one of Australia’s leading horse trainers (and the daughter of the legendary Tommy Smith). It put Tom in a pretty useful position when it comes to marketing his business. But Waterhouse didn’t rely on free PR alone to launch his eponymous bookmaker into the stratosphere?—?instead, he followed the well-trodden path of dot.coms: spend a huge amount on advertising to gain market share, then sell to a well-heeled existing player that has far lower return on equity requirements.

The strategy, while potentially lucrative, is certainly not without heavy risk. Most notably, running out of cash before a bigger fool comes along to overpay for the loss-making business. There have been many examples of both?—?think Pets.com or Webvan in the loser category, or MyCityDeals and Spreets as relative successes (for the seller, not the buyer).

The modus operandi is simple: raise a limited amount of seed money to develop the necessary web infrastructure and commence marketing. Early marketing is usually done through online “affiliates” and Google cost-per-click advertising. Affiliates are basically display advertisement wholesalers with existing relationships with thousands of sites (like blogs or news sites). Many online businesses will then tone down affiliate marketing when they’ve saturated that segment, while others will up the ante and transfer “above the line” (advertising in traditional media).

Traditional advertising doesn’t have that very useful advantage; that’s why almost all online businesses eschew almost all forms of offline spending, which is largely devoted to brand building, rather than specific revenue generation. Of course, if done right, offline advertising can cement a brand in a market-leading positions (like Carsales, Seek or iSelect), but it’s usually done after a brand has been very well established and is profitable. Neither of which appears to be the case with TomWaterhouse.com.

Waterhouse is playing an even risker game than usual: along with finance and p-rn, gambling is a well-established segment of online commerce. Plus, gambling tends to be quite lucrative?—?so the CPA (otherwise known as “cost per acquisition”) of customers is relatively high (compared with, say, online shopping). Gambling companies have been known to provide incentives of upwards of $150 in gambling credit (which works out to be far less than $150, but still, is far higher than a CPA of $3, which is common for nascent segments). Waterhouse himself was last week accused of breaching gambling laws in Victoria after offering a $200 matching bet to entice new customers.

But Waterhouse’s massive gamble may be paying off. The Financial Review reported in March that British gaming giant Ladbrokes was conducting due diligence to take a 50% stake in the business, valuing the nascent enterprise at $200 million. That price lies somewhere between astronomical and moronic (BRW revealed Waterhouse himself only owns around 25% of the business, with the rest held by investors). Moreover, Ladbrokes denied making any sort of bid for Waterhouse, noting it had “no contact” with Waterhouse.

An overseas-based acquirer would purchase a business like Waterhouse solely for its members (and possibly Tom, who would need to remain as a Colonel Sanders-style figurehead with a very hefty earnings-based payment). In old-fashioned terms, this would be the economic goodwill associated with the business. The infrastructure (like website and support staff) would be nearly useless to an existing player, which would need to integrate with existing assets anyway.

As BRW noted, Irish giant Paddy Power purchased the well-established Sportsbet business (which was founded way back in 1993) for $180 million in 2010. At the time, Sportsbet was making a profit of around $20 million annually. By contrast, Waterhouse is believed to be unprofitable (with advertising spend of more than $35 million annually). Moreover, Sportsbet is one of Australia’s most popular websites, ranked 153 in Alexa, compared with Waterhouse, which is ranked a relatively lowly 984 despite its monumental ad spend.

Crikey asked Tom Waterhouse for confirmation on its profitability, but spokesperson said there would be “no comment across the board on [any financial] matters”.

It’s certainly possible Waterhouse may find his patsy and sell the business for a fortune. It’s also possible he will simply run out of money before ever making a profit. Perhaps Tom could frame a market …