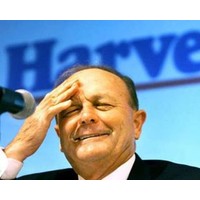 The great blessing and curse of the entrepreneur is that they see opportunity everywhere.

Walk down to the shops they’re bound to see an opportunity for a new store or a way for an existing one to grow. Head to a new city and they’ll almost certainly see an idea you can bring back to Australia, or a way for an Australian idea to be introduced to this new market.

Every business lunch, every family barbecue, every holiday, every meeting can trigger a new business idea.

Of course, knowing which ideas to pursue and which to ignore is part of the skill of great entrepreneur.

But when you’re hugely successful, with years of experience and a big bank balance to show for your efforts, there must reach a point where you see a business idea too juicy to refuse.

Are you an avid reader of newspapers? Then there’s little doubt you’ll have some really bright ideas on how to fix a big media group.

Do you regularly travel for business? Then I’m sure you’ll have some great ideas on how to improve the performance of our iconic airline.

Now, I’m not saying the former is the reason Gina Rinehart bought a stake in Fairfax Media or the latter is why Gerry Harvey has reportedly joined a syndicate of investors who want to force Qantas to change its strategy.

But there is clearly something about iconic companies that make billionaires abandon what many would consider a hard-and-fast business rule: don’t get involved in areas you don’t know much about.

The motivations behind Rinehart’s investment in Fairfax have been discussed numerous times before, although given her lack of a board seat (other than for Jack Cowin) and her inability to effect much change, her motivations for continuing to hold the stake are more difficult to read.

No one from the group is saying much, and Harvey specifically is yet to comment. All we know on the record is that the group believes the Qantas share price is undervalued – a description Rinehart has used at Fairfax.

Reports suggest the dissidents have bigger plans though, like partially floating Qantas’ discount airline Jetstar and spinning off its Frequent Flyers loyalty program. These are both things that were examined as part of the failed private equity bid for Qantas in 2006 – a bid Dixon supported.

So far the dissidents have amassed only 1-2% of Qantas, although Carnegie is said to be talking to  other shareholders who might support the group’s push for change.

If the dissidents can get investor support, they’ll then need to get the public on side – something operators like Singleton and Harvey have experience in.

If all that happens – and there is some serious water to go under the bridge there – then Harvey might get a little role in changing the fate of the Flying Kangaroo.

But as Rinehart can tell you after watching Fairfax’s share price fall by 40% this year, being a dissident can require patience and deep pockets. It’s not like being in your own company and your own sector.