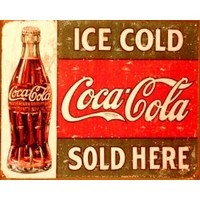 Ads telling you about the negative impact of fat on our bodies started screening on Australian television this week.

The ads aren’t being paid for by a government agency or a health lobby group. Instead, they’re being brought to you by global soft-drink powerhouse Coca-Cola.

It’s part of a multi-platform advertising campaign being rolled out across newspapers, radio, and the small screen.

Soft drinks are notorious for their sugar levels, and there is well-established medical research on the dangerous effects of high sugar levels on our bodies. Which raises the question: why on earth would Coke want to draw attention to this?

Getting on the front foot

SmartCompany asked a number of marketing experts what the company could be thinking.

A couple of them said it was about offense being the best defence.

“They’re trying to get on the front foot,” said Simon Rowell, the managing director of Brand Intellect.

“People are well aware of their sugar content, especially in the non-diet soft drinks. It’s very much in the public sphere. Television current affairs programs run regular spots on it. It’s not an issue that’s going to go away, but is cemented in people’s minds. So they’d rather not be deniers of it, and instead try and say, ‘we’re part of the solution’.”

Marketing consultant and brand expert Michel Hogan agrees, saying it is a pre-emptive strategy on the part of Coca-Cola.

“If you go back to when cigarettes still were advertised, nearly all the major tobacco companies voluntarily ran ads saying they could help you quit smoking.”

But Andrew Hughes, a marketing professor at the Australian National University, says he believes the ads are a way for the beverage giant to promote and highlight its healthier brands, which are likely to be its growth categories in coming decades.

“Coke has been plunging a lot of money into acquiring and building brands in mineral water, like acquiring brands like Vitamin Water, Mount Franklin, and the Daily Juice Company.

“I think this is about Coca-Cola’s maturity as a product. They know it’s in decline. Its glory days are behind it. So they’re doing this to promote their other products, which they mention, which are on the rise as far as sales go. Those are the ones they want you to buy more of.

“It’s a really, really clever ad,” Hughes says. “They’ve done it really subtly – it looks as if it’s about health concerns. That obscures the underlying purpose and makes it more effective.”

Part of the difficulty for Coca Cola is the public outcry that occurs whenever it changes its formula, Hogan adds. This means, for the company, it’s better off offering new products to more health-conscious customers, rather than trying to make its signature product healthier.

Could this strategy backfire for Coca-Cola?

SmartCompany queried all our experts as to whether linking soft drinks with poor health is likely to turn people off the product.

Most said the association was so strong already that it’s unlikely Coke could do anything to further cement it.

In this, there are parallels to the pivot by McDonald’s to healthier products a few years ago, says Tim Riches, the managing director of corporate strategy company The Leading Edge.

But while this pivot avoided the worst outcome, it hasn’t returned McDonald’s to it glory days, Riches says.

“Over the past few years, Subway has been the growth story in that category.

“You could argue that that’s because it delivers the traditional benefits of fast food – it’s cheap, tasty and convenient – but consumers don’t feel they’re compromising their wellbeing while eating it.”

It’s likely Coca-Cola has learnt from this and is keen to avoid being surpassed by healthier alternatives.

“This area really is a convergence between the consumer advertising market and corporate reputation management,” Rich says.

“The ethical dimension of corporate brands is something consumers unquestionably want to engage with and it’s something that other stakeholder groups like seeing too. From a shareholder point of view, they don’t want their investment values to dive off a cliff because the company’s growth can only go downward because of increasing regulation.

“This is an issue across a lot of different categories – from alcohol to fast food. And it’s not just socially aware urban elites who are driving this agenda. They’re becoming mainstream values.

“The implication for Coca Cola is that unless they’re prepared to deal with these issues head on and equip consumers to make educated choices, not only are they negating their ability to engage with these issues on a regulatory level, but they’re also writing themselves out of the debate.

“Staying in that debate is important. You don’t want people to be entirely frightened off a product that, when consumed moderately, is OK.”

Wresting back the PR agenda

And that, more or less, is what Coca Cola is saying.

When Fairfax queried whether the ads were ‘weight-washing’, Coca-Cola Australia group marketing manager Donna Mulholland said the company has been doing things “in the background” on the issue for some time.

“I guess what’s different today is we’re going out and talking about it because we think we can be part of the solution.”