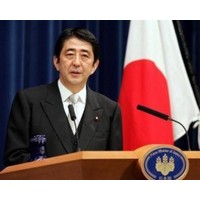 In December last year, Shinzo Abe asked the voters of Japan to make him prime minister.

His election pledge was to raise prices. And in a turn of events that shows just how unique the problems of Japan are, he won.

Last Thursday, Japan’s central bank, the Bank of Japan (BoJ) announced how it will do this. It’ll print money and use it to buy back bonds and other securities, doubling the money supply, until inflation hits its target of 2% a year. It’s set itself a deadline – two years – and aims to put out an extra $US759 billion worth of yen a month.

That’s a huge amount for an economy the size of Japan’s. Why is Japan doing this, and what will it mean for Australia? Well, for the answer to that, we’ve got to go back 20 years.

The property bubble that scarred a generation

Terrified of reinflating the bubble, the conservative BoJ lowered interest rates, but refrained from an aggressive expansion of the money supply.

It wasn’t enough. The economy didn’t bounce back. Facing a number of structural challenges like an ageing population and an inflexible labour market, as well as a severe loss of confidence, Japan has been in the grip of a persistent recession since the 1990s.

In the decades before, Japan was expected to overtake America as the largest economy in the world. Today, no one expects this anymore. As Japan has treaded water, America and now China have powered ahead of it. Today its economy is just a third the size of America’s. Economists have taken to calling the 1990s Japan’s “lost decade”. It economy today is no bigger than it was in 1992.

Japan’s situation is so dire that it’s become a poster-child for an economic condition that previously existed only in theory: the ‘liquidity trap’. When a country is in a liquidity trap, things are so bad the central bank can’t lower interest rates to inflate the economy. When rates were lowered to 0% in Japan, the economy still floundered. Deflation, the continual lowering of prices, became a persistent problem.

As far as economic problems go, deflation’s a real killer. If consumers know they can get something cheaper tomorrow, there’s little incentive to buy it today. While a little deflation – cheaper electronics, for example – never hurt anyone, a lot can seriously derail many of the incentives that make a market economy work. If no one buys anything, profits go down. If profits go down, the sharemarket falls. If the sharemarket keeps falling, companies can’t raise as much money on it. Without money to invest, profits fall further. It’s a deadly cycle.

In 2012, deflation became a huge election issue in Japan. “They realised they’d never get the economy on its feet without dealing with it,” says Shane Oliver, the chief economist at AMP. “They had to turn the whole psychology around.”

Why didn’t they do something sooner?

“I think sometimes, policymakers just get it wrong, like they did in America in the 1930s,” Oliver says. “That’s what the BoJ did. After 20 years, they’ve finally woken up.”