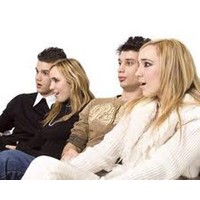 Only 13 months after being appointed, including seven months of “gardening leave” while he served out a non-compete clause, Channel Ten chief executive James Warburton is gone.

His sacking comes after Ten’s market share slumped to 21% of the national audience, ranking it third after Seven and Nine, and meaning more people were watching Foxtel than the free-to-air channel. Five years ago, although Channel Ten was also third in the ratings, it was more profitable than rivals Nine and Seven. While the decline has taken place over several years, in 2012 shows such as Being Lara Bingle and Everybody Dance Now failed to gain audiences. Even ratings hit MasterChef hasn’t been doing as well as it used to.

For the lack of progress, the board has blamed Warburton.

His replacement, Hamish McLellan, won’t step into the role until March. But he has already set out an agenda, telling the Sunday Herald Sun Ten won’t be focusing solely on young viewers (those aged 16-39).

“We’ve had a laser focus in a youth demographic sense… But I think we can be youthful and appeal to a slightly wider audience without losing what we are good at.”

He made similar comments to The Australian Financial Review, saying the network had skewed “a bit too young”.

“When we go to the younger audience, that’s the end of the spectrum that’s fragmenting the most,” McLellan reportedly said.

It’s easy to see why McLellan would say this. The perception is that young viewers are far more likely to watch YouTube than television. They’re notorious for pirating content. And they’re often reluctant to pay for stuff, having grown up consuming and creating content on the generally free internet.

But the experts LeadingCompany contacted this morning doubted a lot of this conventional wisdom.

“The comments from Hamish [McLellan] are that the younger ends of the market are no longer watching television. [But] I don’t think that’s true.

“There are declines in audiences everywhere. It’s not as severe in older age groups, but people over 50 aren’t a required demographic.” Most of the advertising dollar (84%) still goes towards targeting those under 50.

Holding onto young audiences is hard, Allens acknowledges. Australia has one of the highest rates of online piracy in the world, which is often attributed to the fact that shows by Hollywood studios air in Australia long after they’ve done so in most of the developed world.

“They’re much more wily viewers. They aren’t coach-potato viewers. Programming for them has to be appealing and fresh.”

Marketing to the young has been a winning strategy for company in a range of sectors for decades; they grow up with your brand, buy your products for decades and gradually get richer. But with an ageing population, is that demographic equation changing?

“Australia has the fastest-growing population in the developed world,” he tells LeadingCompany.

“That’s driven both by a fairly high birth rate by developed country standards, but also by very high levels of immigration.”

Dawson says changes in technological habits are adopted by everyone faster than is commonly thought. While the young are often the first to embrace many new technologies, they’re never alone in doing so for long.

“Those who want more stable audiences will tend to [target] older viewers, but by the very nature of life, those older viewers are disappearing,” he says.

He adds that young viewers still drive trends in sectors such as entertainment, in which they are a relatively high-spending category.

Dawson says the challenge for Channel Ten is that in trying to entice a broader demographic, it risks diluting its appeal to its current viewers.

Allen also doubts the wisdom of a move to an older age bracket, partly because he says it’d be a complete shift in Ten’s strategy.

“In the board’s stumbling around to find a strategy, they’ve really thrown out what the last two changes in management aimed to do,” he says.

“When Grant Blackley got thrown out, the problem was seen as the brand being too old and broad. They were trying to go younger.” Blackley was the CEO before Warburton. He was also sacked by the board.

If positioning isn’t a problem for Channel Ten, what is?

“The troubles that Channel Ten is having are due to programming,” Allen says. “And maybe promotion.”