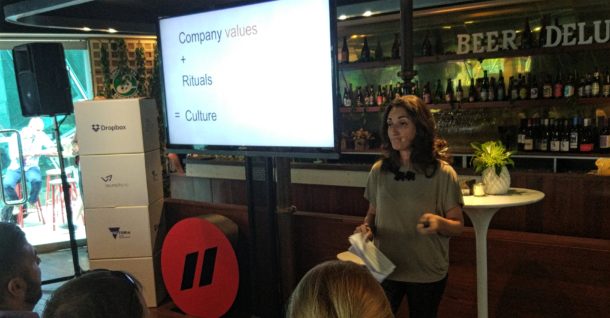 Taking the time to outline company values may not always be at the top of the list of priorities for SMEs as their business grows.

However, a strong set of company values can be absolutely critical in driving strong team engagement and hiring processes, according to Jodie Auster, general manager of UberEATS Melbourne.

Speaking at Pause Fest in Melbourne earlier this month, Auster spoke of her time as vice president of people at US firm Thumbtack and her role in defining the company’s core values.

When Auster joined the company, the founders had already established a set of values, but as the company grew rapidly, it became clear that a refresh was needed.

“When I joined Thumbtack in 2013 there were about 25 employees, and when I left last year it had grown to 500,” Auster told listeners at PauseFest.

“The early version of the values served us well until we hit about 100 employees, as prior to that the founders were able to interview every candidate who came through.”

In order to keep new hires in line with the company’s driving views, Auster was directed to lead the values refresh.

“Being really clear about who we were as a team and what we fiercely wanted to protect was one of the most important ingredients for company growth,” she said.

What are values in the context of your business?

Auster recited a dictionary definition of values, which is: “principles or standards of behaviour, one’s judgment of what’s important in life”.

“I actually think this is a pretty good definition in a company context too,” she said.

“It should define the values and behaviours that are important to the company, the core principles that you apply to your work, and a set of standards that help guide your team’s behaviour.”

“Brand values are what customers say about you behind your back,” she said.

“Company culture happens whether you like it or not”

Auster believes it is essential to define company values because “company culture happens whether you like it or not”. Defining strong values can prevent that culture from turning into something you don’t like.

“If you don’t clearly define or embed it, it can turn into something you didn’t intend, and that’s why it’s so important to take the time to define your values and create meaningful rituals,” Auster said.

Over the course of 10 staff workshops, eight drafts of the values, and six months of work, Auster and Thumbtack’s founders came up with four key values that represented the company’s “DNA”.

The values were: “Know our customer; reason from first principle; make each other better; go”. 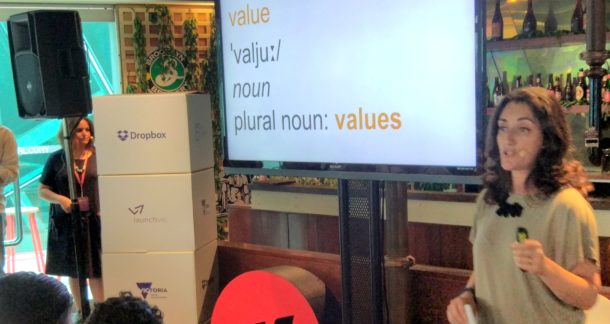 Each value was designed to represent the company at its core, and Auster said some well-laid guidelines helped keep the values succinct. These guidelines should be front of mind for all businesses trying to develop their own set of values.

1. Keep it short and sweet

With “pithy” one of the Thumbtack’s founders’ favourite words, Auster said keeping a list of values from sprawling out of control can help maintain focus.

“Use few and powerful words, keep the list short and memorable. Our founders were very set on just four values,” she said.

2. Choose values that are true of the team you already have

“You can write a long list of aspirational values, but if no-one in the building looks or feels like that, you’re probably not going to succeed,” Auster said.

“[It] should feel very much like what’s already there, you’re just surfacing that and articulating it.”

3. Make sure the values make sense across all locations

With the company’s teams in multiple cities across the globe, Auster and Thumbtack’s founders were conscious the firm’s values had to be globally consistent to help guide decisions.

“It’s very common and acceptable for the rituals that go along with those values to be different in each place, but core values have to be consistent otherwise it’s very confusing,” Auster said.

After a company establishes its values, Auster warns against them becoming just “stickers on a wall”, and instead endeavour to weave them into key decisions and processes.

Although Auster acknowledged not every company is at the stage where it’s right to undertake an in-depth value assessment, even getting a rough draft down can help with decisions moving forward.

“There are really a lot of ways you can incorporate this concept into your company’s journey no matter where you’re at,” she said.

“It’s a really great exercise no matter the scale. Just start with one draft that you can use in hiring, and even that will help you go through the full process later.”