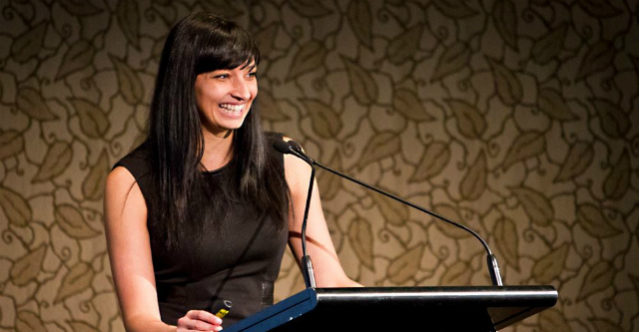 Before building a $1 million digital agency, Melbourne entrepreneur Richenda Vermeulen was a social worker driven by the goal of making a difference to the world.

Hesitant to start her own business after seeing first-hand the trials and tribulations of entrepreneurship through her parents, Vermeulen had landed her dream job – at the time – at World Vision.

But her innovative approach to digital marketing, branding and entrepreneurship soon led her to establish ntegrity in 2012.

The impact-driven digital agency boasts a high-profile client list of some of Australia’s most recognised non-profits and charity organisations, including the Foundation for Young Australians, World Vision and Plan.

Vermeulen says her success has not come from rigorous 20-hour days and sleepless nights but rather a dedicated focus on building self-awareness and optimising her strengths to be an empowering leader.

In fact, Vermeulen has vowed to not work late nights and on weekends.

Speaking at a recent Melbourne event hosted by Startup Victoria Female Founders, Vermeulen said one of the biggest mistakes founders make is sacrificing life for the pursuit of an idea.

“An idea is just a moment,” she says.

And forgetting yourself and everything else in life for this, she believes, is just not worth it.

“The environment we should create is through truth and actual practical examples, versus talking about things theoretically.”

Could the memories you’re most ashamed of, be a source of pride?

Shifting perspective on any problem can not only hack solutions for your startup, it can also help see the light when things start to fall apart, says Vermeulen.

She notes it wasn’t until recently that she began to see her abilities as an entrepreneur, as for a long time, these were clouded by insecurities from her childhood.

She didn’t realise this until her work started to put her in the public spotlight, which caused unexpected anxiety.

“I had this sense of panic and nervousness, I couldn’t pinpoint what that was,” she says.

By speaking with a business coach and counsellor, Vermeuelen discovered the root cause of her issue.

“I struggled in my early life, both of my parents have English as a second language and they didn’t go to university,” she says.

“As for many migrant children it’s quite normal, you always feel as you’re not as good as other kids or as skilled.”

But as she started to build her business and get noticed by the media, Vermeulen realised these assumptions were wrong.

“That’s starting to contradict these things that I believed about myself,” she says.

“What I was thinking and feeling didn’t make sense.”

After removing these insecurities and assumptions from her perspective, Vermeulen saw her parents in a brand new light.

“My parents didn’t have literacy skills but they still grew successful businesses,” she says.

“That sense of accomplishment took away my fear and anxiety.”

Through the course of growing ntegrity, Vermeulen says she has hit some frightening walls, but developing “healthy habits” has let her thrive through tough rejection and financial loss far beyond her comfort zone.

“It’s having an ability to endure beyond what I thought was possible,” she says.

As she navigated her way through learning to hire the right people, building a company culture, completing taxes, and going on parental leave, Vermeulen says she couldn’t have survived without the support of her formal business coach who always made her reflect on her headspace when making critical decisions.

Knowing the factors that influence your thoughts and feelings, she says, can help identify which concerns are invalid and therefore causing unnecessary stress.

“That was important for my mental health,” she says.

“These are actually hugely emotional [challenges]: to know whether you’re going to be audited is stressful, [or] hiring the right people when you’re on parental leave.

“Having a mentor that could talk about both the practical but also the emotional was important. He knew me well enough to know when I was taking care of myself and when I wasn’t.”

Learn more: Three tips to get the most out of your mentor.

As an entrepreneur, Vermeulen says it’s also important to recognise when it’s time to for further treatment.

“There are some things I can’t talk to my mentor and coach about that are very personal and that’s when I go see a counsellor,” she says.

You use your experiences and skills to start something and then you gain more skills and experiences to continue in the business you have started. It is using your ideas-experiences-skills-education to create.