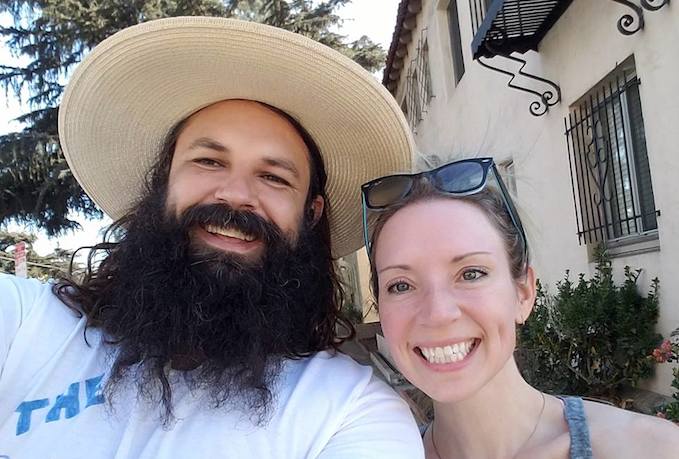 In 2014, dog walking was one of Australia’s fastest growing local industries. But in 2016, the world may see the rise of a different sort of walking industry – this time without the dogs.

Los Angeles man Chuck McCarthy has set up the world’s first “people-walking” business, charging customers $US7 US ($9.20) per mile for a simple walk and a chat. McCarthy is an aspiring actor in his 30s, but has been struggling to find any roles or employment.

Wearing a white t-shirt with the words “The People Walker” scrawled on with markers, McCarthy told The Guardian the idea came to him as a joking way to make some extra cash.

“The more I thought about it, the less crazy it seemed,” he said.

McCarthy says he has been walking people every day of the week, and even getting some regular clients.

“I try to listen more than talk. It’s mostly surface, small talk type stuff. But I think it’s therapeutic even if they’re not baring their souls,” McCarthy told The Guardian.

Interest in McCarthy’s business is blossoming, with the People Walker saying he has been fielding hundreds of requests for a stroll, and his Facebook page receiving over 8000 likes. McCarthy has recruited walkers across different parts of LA, and is contemplating further expansion.

The entrepreneur is even considering an Uber-style walking app, allowing walkers and walkees to rate each other, and be matched based on location and walking speed. He told SmartCompany the app “will hopefully spread people walking world wide”.

McCarthy appeared on The Today Show on October 2, discussing the interest in the people walking industry.

“People are really responding to it, I have several week to week repeating customers, and I’m getting more and more requests. People around the world are sending me messages asking me when they can get walked where they are or wanting to become People Walkers themselves,” McCarthy said.

I walked a group of 4 millennials this afternoon. They didn’t seem like they had the cliche ADHD, but when we went to take a picture, one of them disappeared. #thepeoplewalker #losangeles #fitness #extracurricular

The main reason people use the service is motivation to get out of the house and get active without employing a personal trainer or going to the gym, says McCarthy.

Many people have taken to social media to throw their support behind the business, with some even requesting the service in Australia.

“Wish you were in Australia. Great idea,” said a supporter on Facebook.

@ThePeopleWalker Such a cool guy with a great idea. #publichealth #society #innovation

If you have an idea, put it out there to see what it can attract and what you can create. Ideas come from anywhere and from anyone, it is what you do with those ideas as to
turn them into a business. If you don’t succeed at the start, modify your next attempt from what you have learnt and keep modifying until you succeed.

A very good idea, people everywhere want a sane approach to losing weight and becoming active-not everyone wants to take protein powder and look like Arnie!