The vision, the challenges and the most memorable moments: Looking back on 10 years of SmartCompany

For most founders, the process of starting their business starts with a bold ambition and it was no different for the founders of SmartCompany back in 2007.

Leadership expert Jim Collins calls it a BHAG (“big, hairy, audacious, goal”): a vision that will guide the business, and everyone in it, towards success.

For SmartCompany, that goal was all about improving the chances of success for Australia’s entrepreneurial community—something that was close to home for the founders of its parent company, Private Media, Eric Beecher and Di Gribble.

“It was the early days of online publishing. We had recently bought our first online publication, Crikey. It was growing healthily, so we did what most entrepreneurs do—we looked for the next opportunity,” Beecher says.

“In those days there was very little online for entrepreneurs and small and medium business owners, even though a large chunk of that audience was already online itself.”

The goal was not only to help business owners and entrepreneurs to “build bigger, better business”, says co-founder Amanda Gome, but to educate others about SMEs too.

“We also wanted to educate regulators, banks, policy makers, the Tax Office, [and] the corporate sector so they could improve their services to small business,” she says.

“And lastly, we wanted to provide a marketplace so that advertisers could talk to small business and have a way to sell them better targeted goods and services.”

There was no other digital publications dedicated to this group of business owners at the time, but according to Gome, that didn’t dissuade commercial partners.

“Business publications were—and are—obsessed with the top 100 ASX-listed companies and their chief executives,” she says when reflecting on what made SmartCompany different.

“Ten years ago entrepreneur was a dirty word and as for small business, for a journalist back then, writing about small business was usually viewed as some form of punishment and the first step out the door.

“We thought advertisers would need massive explanation about this new media. Instead they signed contracts often at the first meeting [and] they said to us: ‘What took you so long and what’s wrong with the rest of the media? Why are they ignoring the shift to digital and social?’” 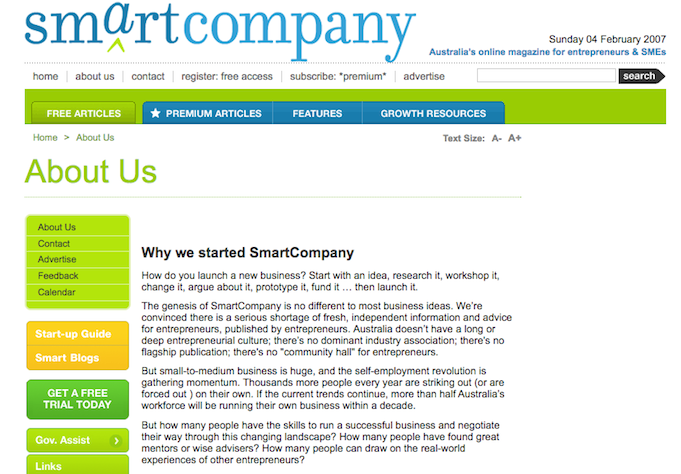 When speaking with previous publishers and editors of SmartCompany, the theme that emerges is one of a passionate and loyal group of readers that are “hungry for knowledge” and who demand excellence from the publication (no doubt the same expectations they follow in their own business ventures).

“It’s so lonely running your own business and our readers saw us as a trusted partner with whom they could engage with every day,” recalls Gome, who spent seven years with the publication.

“You changed my life, they would tell us. This was both humbling and exhilarating for our staff and we got to know a lot of readers personally.”

But SmartCompany readers are also not afraid to tell it how it is.

“They could also be brutal,” Gome says.

“If they felt SmartCompany or an author had let them down or some politician was talking rubbish, they wouldn’t mince words.”

Former editor James Thomson, who joined SmartCompany in 2008, agrees, saying SmartCompany‘s readers “felt they owned the thing, which of course they did”.

“That meant their feedback would always be honest and at times be brutal. But that’s exactly how it should be—publications need to be audience-first and we always were.”

As a new business itself, SmartCompany shared much in common with its target market, and that gave those working in the business “a real empathy for our readers”, says Thomson.

“We knew what it was like to build a business on a shoe-string, to face growing pains and to juggle big ideas and small resources,” he says.

Having the opportunity to regularly interview and write about some of Australia’s top business leaders—and those overseas—is something that has stayed with SmartCompany’s publishers and editors, who say those stories contributed to their personal growth, and the growth of the publication.

Cara Waters edited SmartCompany between 2012 and 2015 and she describes working on the publication as “both inspiring and exhausting”.

“I was constantly in awe of the hundreds of small business owners and entrepreneurs I interviewed. Each one of them had put it all on the line and taken huge risks in order to follow their passion,” Waters says.

“But the job was also exhausting because there were so many small businesses out there who were generally ignored by the mainstream press. Small business issues also failed to get political traction. It felt like our little team at SmartCompany were often only scratching the surface of the stories that deserved to be told.”

For Melinda Oliver, who edited SmartCompany in 2013 and early 2014, an interview with Tim Ferris of The 4 Hour Workweek fame sticks in her mind.

“He highlighted the need to focus on quality, deep tasks that achieve vital outcomes, rather than filling your day being ‘busy’, yet ultimately being unproductive,” she says.

“My discussion was not only valuable for our readers, but sparked a change in my own behaviour that I continue with today.”

Other times, it was a single comment from a business leader that left a last impression on the editor at the time.

“Patrick Stafford, our tech writer, had one of the all-time great run-ins with Gerry Harvey who said that online retail wouldn’t amount to much,” Thomson says.

“We dined out on that forever.”

It’s not just the entrepreneurial success stories that have stuck with Gome, who readily recalls one particular story, “because I wrote the same story once a year, year after year”.

“Every May I would travel to Canberra with the team for the federal budget lock-up, hoping desperately that this would be the year it would dawn on some politician that most businesses were small businesses, creating the majority of jobs [and] innovations, and contributing enormously to the community. Maybe this would be the year a politician would think about how to help the small business sector so they could employ more people and make an even greater contribution?”

“Yet every year? Nothing! Some years small business didn’t even get a mention. I would rattle off the same story, condemning the politicians for their short-sightedness and telling them to wake up. I got so used to writing that same story, it was a big jolt the year small business finally made it on the government’s radar.”

Waters says the situation is changing.

“SmartCompany has played an important role in championing small businesses and giving them a voice and I’m proud to have been a small part of it.” 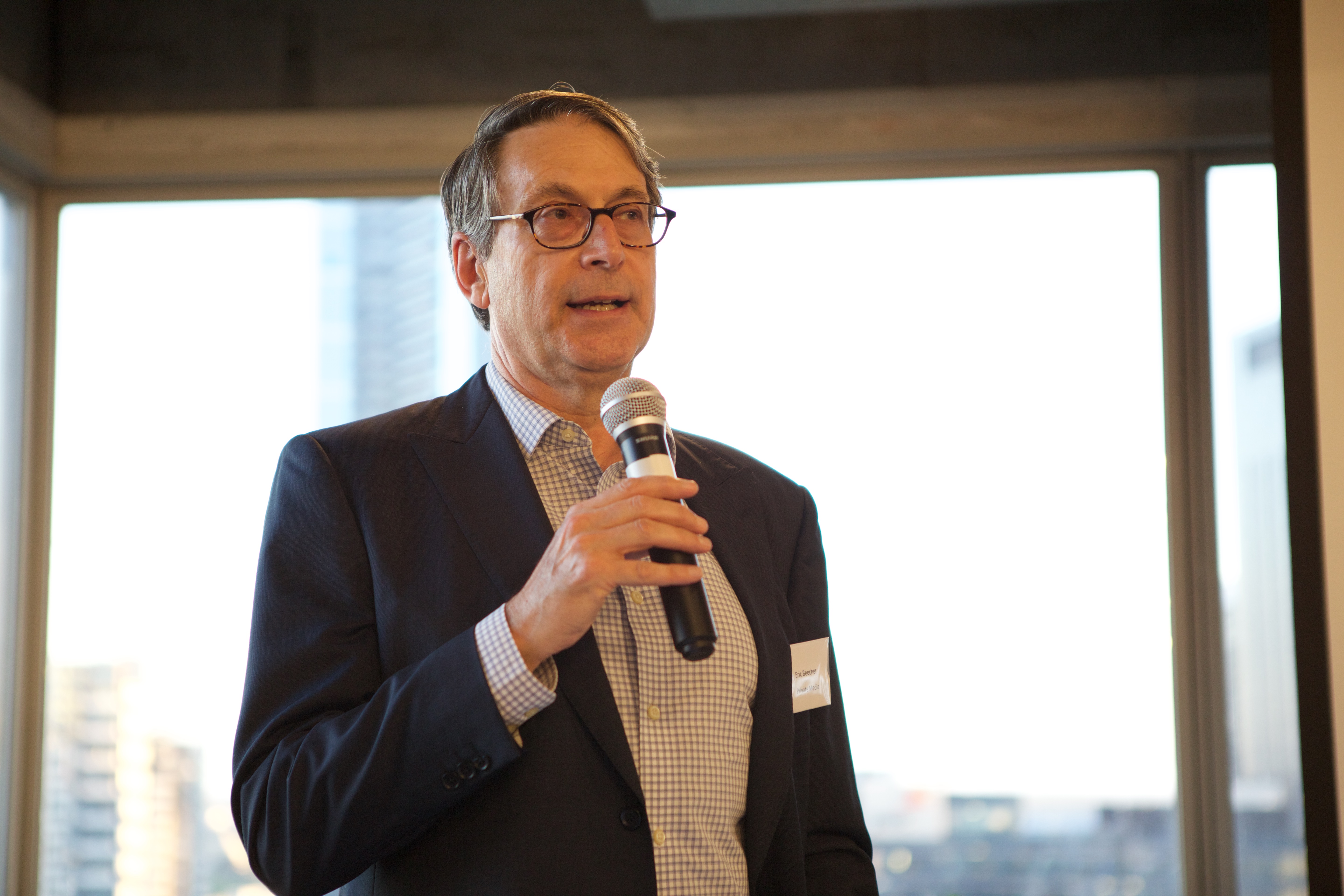 Another one of Jim Collins’ pieces of advice is that the leaders of businesses have to front up to the hard facts and challenges they encounter.

Gome cites cash flow as one of the challenges for SmartCompany as it began to quickly grow, along with breaking out of a “traditional journalistic mindset”, given many of the people involved had previously worked for other, larger media organisations.

“It took us a few years to become truly digital-first and understand that design, distribution and technology were as important as our content,” she says.

For his part, Beecher admits more could have been done to develop a coherent business model, to be “digital first”, and to learn quickly from mistakes and missteps.

“But we did persevere,” he says.

“And, in recent times, we have educated ourselves to be more agile, resourceful and ruthless in forcing and measuring change.

“We’re probably a lot like many of our readers: passionate, always trying to know what we don’t know, bursting with more ideas than the capacity to execute, and endlessly determined to make it work.

“Are we a smart company ourselves? We’re getting closer.”