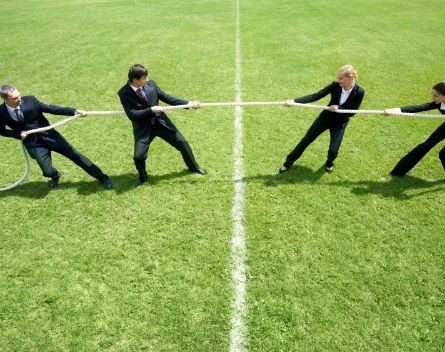 For the last 20 years, this sequence of responses has become quite common to those who watch the internet and the creative companies it’s spawned. Incumbent businesses confronted by these digital disrupters resist changes to the status quo for understandable reasons: they were winning at a game they had mastered. When the game changes, efforts to strengthen the previous barriers to entry are standard procedure.

Microsoft did it to Linux (an open-source operating system), the Bell companies fought voice service competition from cable-TV triple-plays and startups like Vonage, and record labels defeated Napster and then proceeded to sue their own customers once they realized peer-to-peer file sharing could not be shut down at a central locus.

More recently, Airbnb and Uber have inspired a new generation of incumbents to play these same cards. Both companies have grown at phenomenal rates over short lifetimes, both rely on not owning the core asset (sleeping rooms in the former case, cars in the latter), and both have attracted sky-high equity valuations.

Because of these traits, they have also attracted the attention of asset-owners who formerly profited from scarcity and thus are threatened by the lower prices brought by the asset-light coordination model of these two disrupters. This threat has prompted the asset-owners to erect barriers to entry wherever they can, often in the guise of more regulation.

Just this month, Airbnb faced a proposal in San Francisco that would place more restrictions on rentals, while Uber has inspired fierce opposition to a bill that would allow its entrance into the Nevada (read “deliberately scarce Las Vegas taxi”) market. More interestingly, New York hotel interests are fighting Airbnb’s efforts to pay lodging taxes, in part because doing so would seem to legitimize the new competitor.

In all cases, the incumbents are trying to use their links to legislators to increase regulation of their sector, biased toward status-quo definitions of same. But such efforts that purport to protect consumers lead to all sorts of unintended consequences. Previous efforts to stifle disruptive technologies have often been costly for the economy and in the end unsuccessful, no matter how logical and attractive they appeared to be at the time.

Both Airbnb and Uber make commissions by matching sleepers or riders with beds or cars, aided by the internet’s tendency to lower coordination costs and smartphones’ unique combination of geographic context, rich visuals and ubiquitous wireless networking. It’s a much more attractive model than owning infrastructure and having to pay health care for employees.

Across the world, many taxi and limousine commissions (TLCs) have ruled Uber illegal (even so, the service currently operates in 55 countries). Couch-surfing is more difficult to regulate: a 30-story hotel in Times Square is impossible to miss, while 20,000 available rooms in New York city (the figure dates from 2014) are mostly invisible from the street.

In both cases, however, the incumbents can only do so much by way of competition: cab fares are set by law and taxi medallions are scarce for obvious reasons. In New York, the price of those medallions dropped by 17% (about $200,000) between 2013 and 2015, so Uber is hurting incumbents where it counts. Hotels with high fixed expenses, meanwhile, can only compete with Airbnb in subtle ways: saying “we’re cleaner than Joe Blow’s guest room” might be seen as damaging the brand while validating the competition.

As a result, these incumbents can do little except drop prices or resort to regulatory protection. In part, this paucity of options reflects the highly fragmented nature of both markets. Trying to organize 50,000 licensed New York taxi drivers (who share 13,600 vehicles) to improve service, speed up pick-up times or otherwise compete with Uber on quality would be a logistical impossibility. Incentives aren’t aligned: the medallion owners don’t drive cars. Furthermore, taxi companies have been slow to invest in GPS and similar technology, guarded as they were by the regulated scarcity.

Compare this model to Uber, in which the car owner is the driver. The smartphone app is a far superior method of arranging a ride compared with hailing and hoping – or even calling a dispatcher then hoping. Much like Fedex, Uber’s supply chain visibility (knowledge of where the package or cab is) contributes to the overall value of the experience.

Conversely, waiting for a cab to get to the airport is made much more stressful by the lack of knowledge of where the ride is or how bad traffic is on a given route.

Airbnb uses a similar confidence builder, wrapping information around the transaction. Much like eBay (its business-model grandfather), Airbnb rates both buyers and sellers, making both opening one’s home and staying in a private residence less of a gamble.

For both Airbnb and Uber, the low barrier to entry and then the decentralized structure of the asset threatens the incumbents’ moats: medallions in the taxi setting, real estate investment and heavy overhead (branding, IT systems and labor costs) in the case of a hotel.

It’s important to realize how complex business regulation has become. What started as an effort in consumer protection (think of Upton Sinclair, “The Jungle,” and the creation of what became the FDA) now serves to do multiple additional things:

Thus what looks like “illegal” or “unfair” competition is in fact often a matter of innovation breaking an outdated, well-protected business model that has focused on profits rather than customer service or competitive differentiation.

Note that in every case we have mentioned, the consumer protection function of regulation did not drive efforts to outlaw the competitive threat: Linux, VoIP, and unbundled CDs all dropped prices in the market while arguably improving quality. Regulators, however, need things to regulate, as we have just seen when the Federal Communications Commission defined the internet in such a way as to make up for millions of Americans abandoning wireline phone service, its primary locus of influence and revenue. Thus the incumbents and the regulators face a common threat.

Room for regulation, but…

At the same time, it’s worth noting that Airbnb’s and Uber’s independent contractors, with few exceptions, are looking littler and littler in light of the massive valuations and global aspirations of the two startups. In the latter case particularly, drivers have faced repeated and arbitrary changes in compensation models. Uber asserts that these changes should increase gross revenues, but the effect on operating expenses (and thus take-home pay) is less clear.

Given the power imbalance between very big money at headquarters and independent contractors at the edge of the network, there is scope for harm, for protection and for risk – and thus a potential place for regulation – but those affected lack the political weight to compete with the more powerful motivator of eroded profits among a small number of incumbents.

Labor unions and regulations protecting both workplace safety and the right of workers to organize were part of the answer to a similar imbalance in the 20th century. It’s as yet unclear what new arrangements could emerge now.

So when a TLC tries to block Uber cars from accessing airport terminals, or hotels ask a city to refuse Airbnb’s efforts to pay lodging taxes, it’s worth asking: whose interests are being protected? Most likely, the legal efforts directly relate to the incumbent businesses that have been insulated from competition rather than to the common good, public safety, or economic progress.