Consumers are “rattled”: Australians are saving their stimulus cash, and this is bad news for retailers

The federal government has pumped tens of billions of dollars into the economy in recent months, but households appear to be shoving much of it under their mattresses, as a second wave of coronavirus infections in Victoria threatens consumer confidence.

Consumer sentiment plummeted in August to levels of pessimism not seen since the height of the COVID-19 pandemic in April, falling 9.5% to 79.5 on the Westpac Melbourne Institute’s monthly index.

Economists at the bank were surprised by the fall, which extends across Australia’s eastern coast, and particularly by a 15.5% nosedive in sentiment across NSW, now lower on the index than Victoria, where stage four restrictions are in effect.

“The emphasis of the fear is unknown,” economists said in their report.

“Consumers across the nation appear to have been rattled by the developments in Victoria and fear that other states may also succumb to the ‘second wave’ outbreak.” 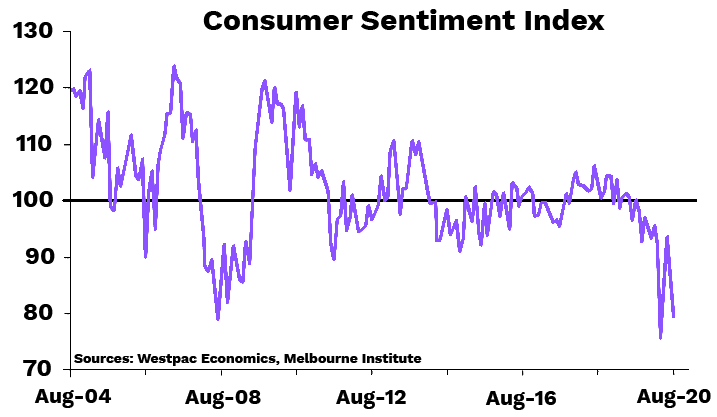 As Australia races towards its first recession since 1992, the findings reflect renewed concern about the path out of the pandemic, with Victoria’s extended lockdown measures rendering earlier Treasury forecasts obsolete.

The federal government has responded to a recent rise in coronavirus cases by committing billions of dollars in additional stimulus, primarily through tweaks to its JobKeeper wage subsidy program.

But analysis of how that stimulus money is making its way through the economy indicates households are spending much of the money on bills, paying down debt and saving for a rainier day.

While one-in-three Australians (32%) had received a federal government stimulus payment in May, 42% reported using the payments to pay household bills, 40% added to their savings, and just over 10% paid down debt.

How Australians spent their COVID-19 stimulus 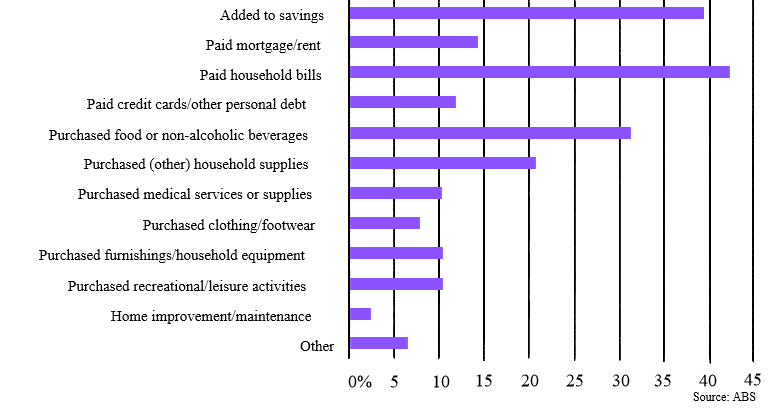 Retail categories such as clothing, footwear, furnishings and goods associated with home improvement were some of the lowest categories, broadly matching how these businesses have fared in overall trading in recent months.

Meanwhile, as corporate reporting season rolls around, many larger ASX-listed companies receiving JobKeeper payments are paying out millions of dollars in dividends to investors, redistributing stimulus money into demographics with a lower propensity to spend.

Driving demand for goods and services will be integral to easing the size and scope of the forthcoming recession, particularly after the Consumer Price Index (CPI) recorded its largest fall in 72-years through June, falling 1.9%.

The federal government has not ruled out extending measures to prop up economy-wide demand, but has previously expressed an interest in pursuing supply-side reforms heading into the October budget, including plans to simplify industrial relations systems for businesses and overhaul vocational training.