These Aussie gin distilleries are producing hand sanitiser to help meet national demand, and keep their staff in work

In Healesville in regional Victoria, the Four Pillars distillery has closed its tasting room and bar to the public, as hospitality venues across the country shut down amid the escalating economic crisis caused by the COVID-19 outbreak.

Four Pillars is in the process of letting go it’s casual hospitality staff, and co-founder Stuart Gregor says the business is bracing for “huge drop off” in its wholesale business as major hotel groups and restaurants also close.

Retailers are still selling Four Pillars gin, but Gregor says it’s not certain as to “how long that will last”.

The company, which was founded in 2013 and is now part-owned by drinks giant Lion, employs about 60 full-time equivalent staff, and Gregor says producing a range of Four Pillars hand sanitiser will allow the company to keep people employed in bottling, packaging and logistics.

Gregor, who also chairs the Australian Distillers Association, which represents about 200 craft distillers, says a number of Australian spirit makers have been approached about producing hand sanitiser by hospitals, healthcare professionals, governments and, of course, consumers, as shortages of the product continue across the country.

“We’ve all been firing off all sorts of recipes and we’ve all agreed on the World Health Organisation-approved one, which is used by medical professionals,” he says.

Four Pillars is in the process of producing products using this recipe and the first stock will be made available to healthcare professionals within the next two weeks.

A second product, which he says will be more ‘ginny’, will then be made available to individual consumers to use at home. In fact, these bottles will be sold from tables out the front of the temporarily closed Healesville venue, along with bottles of gin.

“In a small industry, we’re probably the largest [producer], and therefore probably in as good a position as any to turn on as much as we can,” he says.

The first production of 4,500 units of 500ml bottles sold out in less than an hour.

“The industry is banding together as much as possible,” says Gregor.

In a statement provided to SmartCompany, Archie Rose said the production of hand sanitiser will help keep as many of the company’s more than 20 hospitality workers in employment, following the closure of all bars.

The distillery, which was established in 2014, is reallocating its entire spirits production capacity to producing as much hand sanitiser as possible, and founder Will Edwards said his team have been able to produce the new product in fewer than 10 days.

The bottles are retailing for $20 each, and there is a limit of six bottles per person.

“We as a business and team, along with the retail and hospitality industries, and all Australians, are facing incredibly difficult times,” said Edwards.

“With the required federal licenses, dangerous goods approvals, access to raw materials, and expertise, we are, however, in a very unique position to manufacture this essential product, leading to the tough but clear position to divert our spirits capacity to manufacture hand sanitiser.

“We will also be redeploying as many of our full-time bar staff as possible, who have been stood down as a result of the forced shutdown of all bars, to assist in filling, packaging and shipping the product.” 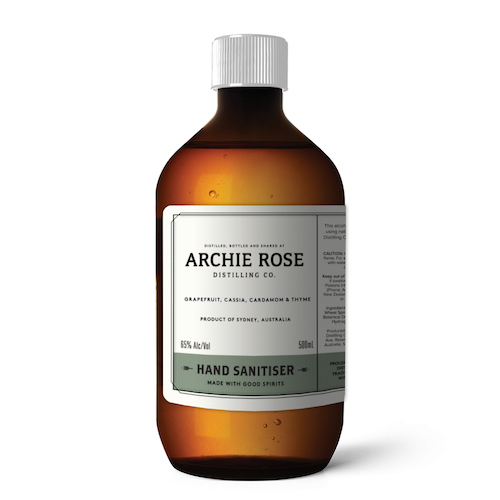 For Four Pillars, another upside of producing hand sanitiser is the ability to use up existing 1-litre bottles, which may otherwise be left empty as a result of the company’s duty-free sales disappearing.

Duty-free sales account for approximately 20% of Four Pillars’ business globally, says Gregor, and that has now gone to “zero” as international travel grinds to a standstill.

“There’s not a bottle being sold in airports,” he says.

Like many Australian businesses, gin distilleries are facing an uncertain and volatile future, as the COVID-19 pandemic continues to take hold.

“It’s such a young, growing and exciting industry, and it would be a great shame if we lost distilleries over the next six months,” he says.

“A lot of them only employ two or three people, they are not big businesses.”

When asked what the federal government could do to support these small businesses, Gregor says “the thing that would make the greatest difference to distilleries is the excise”.

In Australia, the excise duty on spirits is currently set at $86.90 per litre of pure alcohol, which compares to $51.31 per litre of full-strength beer. However, craft brewers and distillers can access an annual excise refund, which increased last year from $30,000 to $100,000.

“We pay a huge amount of excise,” says Gregor.

“Any relief from that would be huge. It’s the single biggest cost for any distillery in Australia.”

NOW READ: Shop still open? What you can, can’t and shouldn’t do when trading through coronavirus

NOW READ: How Adam Pope is completely changing his corporate catering business after losing $55,000 in bookings in two days to COVID-19