A Perth-based hot sauce business with a global cult following has raised over $400,000 through an equity crowdfunding campaign, following a sales spike during the COVID-19 pandemic.

Back in 2012, hot sauce lover-turned-entrepreneur Renae Bunster set out to create a healthier source of spice, using Aussie-grown fruits and veggies wherever possible.

Bunsters’ flagship Shit the Bed Hot Sauce has been the number one selling hot sauce on Amazon in the US, and that plus three other products are on the shelves in 600 independent supermarkets around Australia.

The business now generates about $1 million in revenue every year.

And even during the COVID-19 crisis, and the economic hardship that has come with it, the business is growing. In March 2020, sales were up 100% compared to the same month last year.

Through a Birchal campaign, Bunsters set out to raise a minimum of $100,000 in fresh funding.

At the time of writing, the campaign has attracted just over $409,000 in investment, with 28 days still to go.

The raise follows a round of angel funding last year, Bunster tells SmartCompany. But, the founder has big dreams, and needed a little more cash to achieve them.

Going down the equity crowdfunding route meant she and her team retain control of the business, “and we also get the benefit of getting all these brand ambassadors”, she says.

“We wanted to let our fans own part of the company.”

The business already has hoards of adoring fans, who have claimed Bunsters as their “hot sauce for life”, she says.

“We’ve got this really fantastic brand loyalty,” she adds.

And, somehow, the COVID-19 pandemic has only added to that. 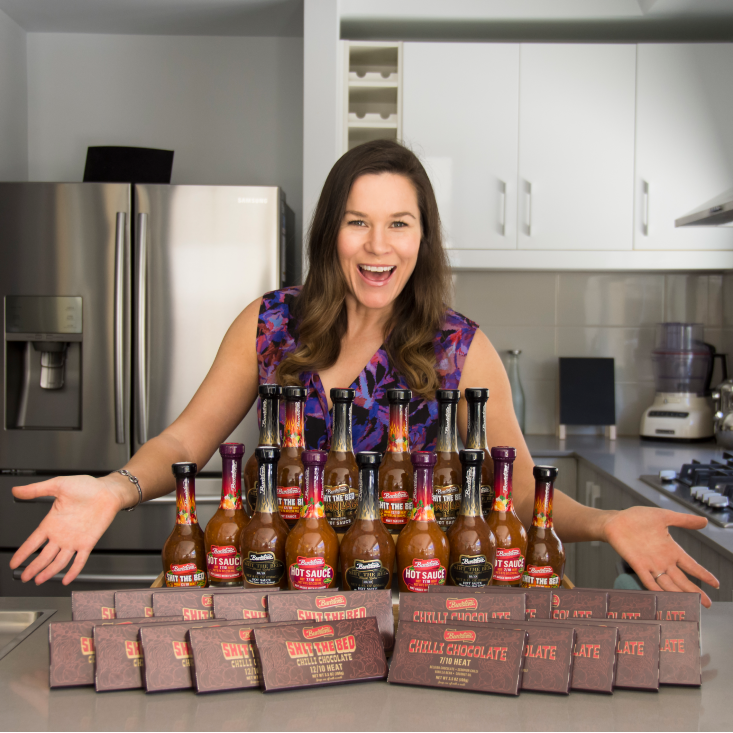 As people found themselves stuck at home and ordering more products online, the simple fact that this sauce says the word ‘shit’ on the bottle piqued the interest of first-time consumers.

That little word has always held the brand back from approaching the big Aussie supermarkets, Bunster says. So, it’s always had to have strong online distribution channels.

“When COVID happened, everything was set up.”

At the same time, as the lockdowns led to changing behaviours, they also led to some perhaps disappointing realities, Bunster says.

“Everybody realised they couldn’t cook,” she says.

“So many people eat out … all of a sudden they were stuck at home and they had to cook their own food,” she adds.

“They needed a big bottle of heat and flavour.”

On perhaps a more serious note, as the crisis has continued, Bunster says Aussies have become more cognisant of food supply chains. There’s a drive both to reduce reliance on imported foods, and to help support local businesses that may be doing it tough.

“Aussies became really aware of the fact that we have to become more self-sufficient and support Australia-made food and businesses,” she says.

Once this funding round closes, Bunster will be throwing herself into creating new Bunsters products, she says.

“For years I’ve only had four products — three hot sauces and one barbecue sauce,” she says.

Although the business is raking in significant revenues, it hasn’t been enough to produce these new sauces at the scale this founder has in mind.

She wants to not only distribute in Aussie stores and online – she wants it to be available in the US and all over the world.

“We have new products in the pipeline that are just as fantastic as Shit the Bed,” she says.

“But they won’t have a swear word on the front.”

NOW READ: Skin in the game and investment with heart: What does equity crowdfunding look like in the era of COVID-19?