Despite COVID-19, more dollars were invested into Aussie startups in the second quarter of 2020 than during the same time last year. But, the number of investments was significantly lower, showing an acceleration of an existing trend — and a dearth of cash for early-stage ventures.

In Q2 2020, while there were significantly fewer deals, the total deal value jumped to $786 million, meaning an average deal size of $17.9 million. The median deal value was $6.4 million.

While not all that surprising, this is a continuation of a potentially concerning trend, and one that we’ve covered extensively before. Bigger chunks of capital are being pumped into scaleups, while less is going into seed-stage rounds and angel investment.

This trend was already apparent pre-pandemic. But, anecdotal evidence suggests COVID-19 has caused VC firms to re-invest in their existing portfolios, to give them the runway they need to survive the economic downturn.

Two of the quarter’s biggest deals went to startups in sectors that have been experiencing growth during the pandemic. Edtech startup GO1 raised $61 million in May, and design unicorn Canva raised $87 million just last month.

The largest raise of the quarter was Judo Bank’s whopper $230 million raise in early May.

While Q1 2020 saw 50 deals completed in Australia, more than half of those were completed in February, before the true extent of the COVID-19 pandemic became evident here. 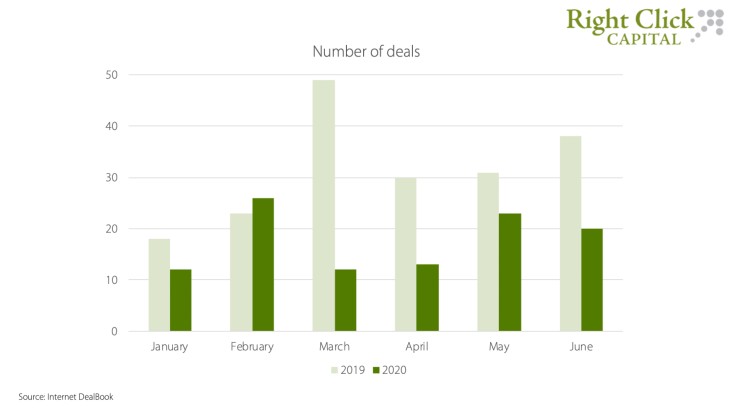 Number of startup investment deals in Australia in 2020 so far, month-by-month, compared to 2019. Source: Internet DealBook.

By May, however, things started to pick up a little, with 23 deals closed. Another 20 were closed in June.

That’s compared to 31 and 38 for May and June 2019, respectively. But, at least things are heading in the right direction.

Speaking to SmartCompany when the Internet DeaBook figures for Q1 2020 were announced, Right Click Capital partner Benjamin Chong expressed concern that this trend would continue into the second quarter of the year.

Many non-traditional angels — that is, the ‘friends, family and fools’ investors — may be less inclined to invest, he noted.

But, it’s not necessarily all doom and gloom. Rather, it will see early-stage companies focusing on product and profitability.

“What we will see more of over the coming months is bootstrapping,” Chong said. “We’ll see people try to make more progress, particularly on product, without as much funding and without as much customer interaction.”

NOW READ: A new normal for startups: How to handle a slowdown when your BAU is hypergrowth

NOW READ: News vs numbers: What does COVID-19 really mean for startup funding in Australia?