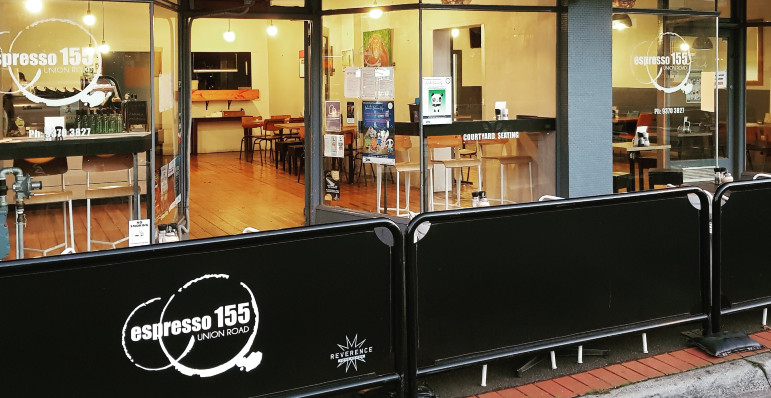 Espresso 155 is shutting down its dining room in Ascot Vale.

Maria Iatrou was closing up her Ascot Vale cafe Espresso 155 on Tuesday when a frazzled customer showed up with some bombshell news.

The Melbourne suburb Iatrou’s two-building cafe is located in, at the once-bustling Union Road precinct, was about to go back into lockdown.

“I was sitting there asking when? I thought there was no way, we’d been through so much,” Iatrou tells SmartCompany.

Victorian Premier Daniel Andrews was, at the same time, announcing a reimposition of trading restrictions across 36 Victorian suburbs, amid a second wave of coronavirus infections.

What followed over the next 24 hours was an unenviable mix of “frustration, disappointment and sadness”, the cafe owner says.

“I’ve had to go back to closing one building off and using it to basically store all of our chairs, tables and outdoor dining stuff,” Iatrou says.

“It means I now have a building that’s creating zero dollars in revenue, but I still have a lease.”

From 11:59pm last night, restaurants, cafes and pubs in Ascot Vale and 35 other Victorian suburbs must once again shutter their dining rooms and transition back to delivery and takeaway services.

For business owners, many of whom a fortnight ago were preparing to open for 50 diners, the reimposition of lockdowns is potentially crushing and will rewind local trading conditions back to the height of the pandemic in March and April.

Iatrou, who is also the president of the Union Road Traders’ Association, says many shops along her strip had only just started to re-open.

“Everybody is still reeling to be honest with you. A lot of places are extremely frustrated and very disappointed,” Iatrou says.

Government grants a “drop in the bucket”

Businesses now face the prospect of trading through to at least July 29 under reimposed restrictions, while cafes and other venues in neighbouring suburbs continue to open.

“Before it was us, this time it’s us and them,” Iatrou says. “I’m trading with one hand tied behind my back.”

Such is the nature of localised lockdowns, where in some cases Melbourne communities have been split almost down the middle. Cafes along one side of a street are allowed to take dine-in customers, while those on the other side remain forcibly shut.

Worse, while restricted businesses could previously look forward to six months of JobKeeper payments and rent deferrals, the runway between today and September 27 is much shorter.

In a best-case scenario these businesses will be able to re-open less than a month before they’ll lose thousands of dollars a month in federal support from wage subsidy payments and other programs.

The state government has promised $5000 emergency grants to businesses affected by the second lockdown, but it’s hard to see how this could really begin to make up for lost revenue.

“While anything is welcome at this stage, it literally is a drop in the bucket,” Iatrou says of the emergency grants.

“It’s like trying to stop a waterfall with your hands — it’s impossible.”

Restaurants, cafes and other takeaway businesses in these areas had only just started to find their feet, amid an unprecedented downturn in industry-wide revenue nationally.

Over April, revenue fell 64.6% against 2019, declining again by around 30% in May, according to Australian Bureau of Statistics (ABS) figures.

Other industry stakeholders, says roastery Harris Coffee chief executive David Ansell, are also worried about the future of the industry.

“Our very rituals, that Saturday or Sunday morning coffee run, has been impacted,” Ansell tells SmartCompany.

“We all hoped things were going to start to recess, but we’ve just been reminded we’re not out of the woods.”

Harris Coffee published a YouGov survey of 1,000 business owners on Wednesday, finding 70% were worried their cafe’s would never be the same after COVID-19.

A further 80% didn’t believe they would recover without support, prompting Ansell to launch a $1 million recovery fund for the national industry, which has pledged to support 25 eligible cafe owners.

“It’s an important opportunity to give back … I’m hoping we can help all of the 25 and maybe a few more after that,” Ansell says.

An industry in crisis: Calls for government to step in

But private support is unlikely to be enough to see businesses through, particularly those now entering a second lockdown in Victoria.

The Victorian lockdowns put the federal government’s plans for the JobKeeper program into focus; changes to the $70 billion scheme are due to be handed down on July 23 and business advocates are amplifying their calls for restaurants and cafes to receive more federal help.

Small business ombudsman Kate Carnell says its “impossible” for small business owners to plan for the re-introduction of lockdowns, with lost stock and bookings inevitable consequences.

“There will be a prolonged period before these small business owners are back on their feet,” Carnell said in a statement.

“JobKeeper has certainly been effective in keeping many of these businesses afloat, but some additional targeted support will likely be required to help these once-viable cafes get to the other side of this difficult time.”

For Iatrou and other businesses on Union Road, the prospect of a second lockdown is daunting enough, without having to worry about what will happen when government help dries up in September.

“It makes it so hard to know whether you’re going to be able to survive,” she says.

“It will literally be like turning the tap off.”

NOW READ: Disrupting the disruptors: How restaurants and startups are flipping the table on meal platforms, and why UberEats should be worried

NOW READ: Inside a fight for survival: Restaurants despair as coronavirus tears through hospitality