Morrison says income support will be extended, so which industries rely on JobKeeper the most?

Prime Minister Scott Morrison has confirmed the federal government will fund a “further phase” of income support beyond September, but whatever measures it unveils in the coming weeks are likely to be focused on the industries most troubled by the COVID-19 pandemic.

With that in mind, it’s worth looking at how various industries have utilised the $70 billion JobKeeper wage subsidy program up until now, with some 3.3 million workers and more than 900,000 businesses enrolled under the scheme to date.

Figures pulled from a Senate Estimates report by Westpac economists reveal 12% (396,424) of JobKeeper recipients work in the professional services industry, while 11.7% (385,679) work in health care and social assistance.

Businesses need to show a 30% decline in turnover on an eligible comparable period, or satisfy one of several alternative tests to qualify for JobKeeper payments. However, while it’s broadly thought that retail, hospitality and tourism-reliant businesses have been hardest hit by the pandemic, they have far fewer workers on wage subsidies.

Hospitality and retail workers each account for 9.5% (about 313,000) of the employees on JobKeeper, which is likely because there are far higher numbers of casual workers in these industries than in professional services, meaning many workers in retail and hospitality were not eligible for wage subsidies.

The least represented industries in JobKeeper enrolment figures are mining and utilities, which account for just 0.1% (2,431) and 0.3% (9,042) of workers respectively. This makes sense given these industries have not been adversely affected by the pandemic in the same way consumer facing companies have.

Here’s the full list of JobKeeper uptake by industry, courtesy of Westpac: 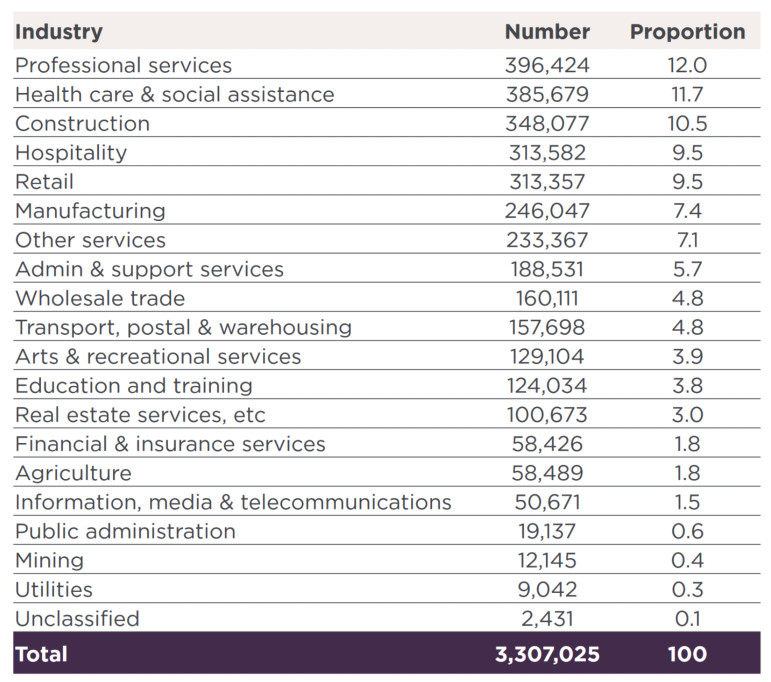