“The vibe is gone”: Businesses in Melbourne’s CBD are crying out for government support under ‘unofficial lockdown’

The latest wave of COVID-19 is putting pressure on small businesses in Melbourne’s CBD, with one saying revenues are similar to or even less than lockdown levels, with no support from the state or federal governments.

As COVID-19 cases and hospitalisations continue to increase, office workers have been advised to continue working from home. The usual shoppers and day-trippers are also staying at home either due to isolation rules or simply to avoid infection.

“We’re seeing our business drop off, and our revenue has been similar if not worse than some of the other lockdowns we’ve been through,” she says.

This time, however, there are no government support payments coming in either.

A confluence of crises in the CBD

The current situation is the cherry on top of an incredibly challenging two years, and Mackie believes the effects have been even more acute in city centres.

CBD businesses pay “disproportionately” higher rents, she notes, and they pay for foot-traffic that no longer materialises.

According to the ANZ-Roy Morgan Business Confidence Rating, consumer confidence is currently at its lowest since October 2020, and at its lowest for January since 1992.

In an interview with The Guardian, David Plank, head of Australian economics at ANZ, said people are “spooked” by the Omicron variant and the latest outbreak, pointing to high case numbers, the relatively high number of deaths, and the ongoing challenges around testing.

“All of that has made people apprehensive and nervous.”

For business owners in Melbourne’s CBD, the effects of this are not clear. Between Flinders Lane, Little Swanston Street and Elizabeth Street, Mackie is seeing more and more businesses closing for good. That in itself could hamper recovery for the rest, she notes.

“I feel like the vibe is gone,” she says.

“Somehow we need to figure out how we’re going to rebuild that.”

Hospitality businesses, including Seedling, are also grappling with staff shortages. While Mackie has been forced to reduce hours for her staff — and had some take leave due to isolation requirements — she feels pressure to take care of them too.

There’s no support for workers, either, she notes. And with hospitality staff in short supply, if she can’t give workers what they need, she risks losing them.

“There are not just other people to replace them with.” 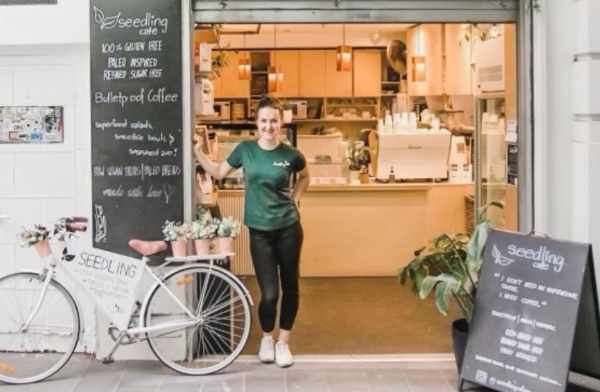 A call out for support

Ultimately, Mackie would like to see some support from the City of Melbourne, even if it’s simply championing the cause of CBD businesses and calling for financial support from the federal and state governments.

Currently, there are no plans to enter an official lockdown, and she feels there has been no acknowledgement from any government that businesses are struggling as much as they are.

While the Victorian state government recently extended commercial rent relief for SMEs until March, that deadline will roll around fast and leave businesses like Seedling at the mercy of their landlords.

Speaking to SmartCompany, Melbourne Lord Mayor Sally Capp said the City of Melbourne is having “ongoing discussions with both levels of government about how our businesses can best be supported during these tough times”.

However, pointing to events such as the Australian Open, the Docklands drone show and the city’s food and drinks scene, Capp also urged people to visit to the CBD to support city traders who have been “hardest hit by the pandemic”.

“Our vaccination rates are among the highest in the country. With improved access to rapid antigen tests and as case numbers fall, the work from home directive should be removed,” she added.

“Bringing office workers back to the city will support all corners of our economy.”

SmartCompany also contacted Victorian Minister for Small Business Jaala Pulford, but did not receive a response prior to publication.

“Is that all down the drain?” she asks.

“All of the help they’ve given us up to this point is kind of a waste if we’re not through it.”

What are your legal rights and obligations if your staff choose to strike over a lack of free rapid antigen tests? Two legal experts weigh in.

A Melbourne coffee roaster has made a swift backtrack and issued an apology after offering ‘free’ rapid antigen tests with a $160 spend.