“This is a national crisis”: Victorian tourism body calls for wage subsidy scheme

Victoria’s peak tourism body is calling on the government for more business support as the national visitor economy faces a crisis amid Sydney and Melbourne’s ongoing lockdowns.

Felicia Mariani, chief executive of the Victorian Tourism Industry Council, put forward a four-point survival plan to the state government, calling for a wage subsidy of at least 40% of weekly payroll until mid-next year.

But Mariani says it’s not only tourism operators in Victoria that urgently need support, with the country’s two largest cities in lockdown for up to three more months.

“This is a national issue when you consider that the two largest source markets for Australian tourism, being Sydney and Melbourne, are not allowed to travel,” Mariani says.

“Pain is being felt all around the country.”

Calls for a national wage subsidy

With Sydney, Melbourne and Canberra under lockdown, more than half of the country’s 25 million population is unable to travel.

The lockdowns are having a significant effect on tourism operators across the country, which is why the Victorian Tourism Industry Council says a national wage subsidy scheme is needed.

“What the entire industry needs, not just here in Victoria, is a return to a national wage subsidy program,” Mariani says. 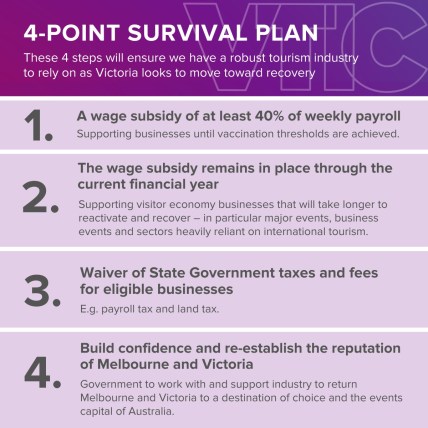 Mariani says the federal government let JobKeeper expire in March on the assumption that Australians would have been vaccinated quicker.

“For a whole raft of reasons that has not happened but the government still proceeded in pulling out that protection measure in March,” she says.

But continued lockdowns mean a vast majority of tourism operators are trading well below pre-pandemic levels, and some have turned to paying staff wages with personal savings and superannuation, Mariani says.

“We are absolutely facing the same issues that we faced last year, but the industry is facing all of them without the safety net of the support programs they had last year,” she says.

Victoria’s current business grants do not come close to matching the weekly expenses most businesses pay while trading through lockdowns.

For this reason, the Victorian Tourism Industry Council is calling on the state government to provide a wage subsidy of at least 40% of weekly payroll until mid-next year and waive payroll and land tax.

One in six Aussie super funds have failed the APRA performance test. What’s next?

APRA is required to rate each MySuper fund with a pass or a fail according to how they have managed their members’ money.

“Come to Cooly”: Coolangatta small businesses band together with campaign to bring back tourists

Two Coolangatta locals have launched an advertising campaign to encourage Queenslanders to visit the Gold Coast suburb that's suffering from the NSW lockdown.