Ongoing, global delays in shipping are making it difficult for Australian small businesses to access stock, and with no certainty on when their items will arrive, many are facing the upcoming Christmas period with little to sell.

Last week, the escalation of industrial action at some Australian ports cast even further doubt on when businesses might receive the goods they’ve been waiting for.

Members of the Maritime Union of Australia are contesting changes that would lead to more casualisation of roles.

That followed months of shipping delays due both to COVID-19 and incidents in the global shipping industry, plus backlogs in factories overseas that have had to close down due to the pandemic.

For some businesses, it comes as “the cherry on top” of a difficult two years of disruption after disruption.

How do shipping delays affect SMEs?

Delays in securing stock can be particularly damaging to businesses that sell seasonal goods.

Stationary retailer MiGoals, for example, sells many products designed to cater to a particular time of a particular year.

Usually, the business’ 2022 diaries and planners would be on the shelves by mid-August. This year, they will launch in October, owner Adam Jelic tells SmartCompany.

On the face of it, that might not seem like a long delay. But these are products with a very short selling window of four to six months.

“Once that passes you run the risk of being left with a lot of stock.”

Currently, Jelic’s waiting on a container, scheduled to arrive in early- to mid-November, with stock earmarked for Black Friday and Christmas sales. This is a key sales period and not having the stock to sell will affect the bottom line.

“We cross our fingers and hope for the best,” he says.

“At this stage it’s something that is out of our control.”

E-commerce businesses in other sectors are facing exactly the same problems.

Philippa Fisher is the owner of My Night Light, an e-commerce business selling kids’ lamps and night lights.

In the past, she’s faced delays in securing stock because a ship was re-routed, she tells SmartCompany. She’s also waiting on her shipment for the Christmas period, but isn’t holding out much hope that it will arrive in time.

Typically, My Night Light makes the vast majority of its sales in the last three or four months months of the year, Fisher explains. It is now the beginning of that peak season and the business has already sold out of four of its bestselling products.

“We’re doing the calculations on what we have left and what we need to sell to hit our sales targets. We just don’t have enough stock.”

Not being able to make the most of the peak revenue season is “so damaging” to a business like Fisher’s.

She’s concerned that after Christmas she’ll be left with stock that will sit on the shelves until next year, and therefore won’t have the cashflow to invest in new products or other areas of the business.

Industrial action “the cherry on top”

After almost two years of COVID-19 and ongoing disruption to global shipping routes, the news of the latest industrial action that could further affect deliveries was the final straw for Fisher.

“If I’m not laughing I’m crying … It’s just one thing after another,” she says.

She recalls the surreal moment she told her young children that her products — redirected during the Suez Canal blockage back in March — were at risk of being attacked by real-life pirates.

Obviously they didn’t believe her. She could barely believe it herself.

“I don’t know how many more things are gonna keep happening before I get to the point of asking: is this even a viable business anymore?”

For his part, Jelic sees the industrial action is just another thing affecting small businesses that they have no control over.

He stresses that he respects everyone’s right to fight to better working conditions, but he also wants people to understand what the knock-on effects are for SMEs — the businesses that have suffered the most throughout the COVID-19 crisis.

“We don’t have endless amounts of money or funding to push through the constant barrage of challenges thrown our way,” he says.

“Something like a port strike, though not catastrophic, for some businesses might just be the cherry on the top and cause them to shut shop for good.”

Ecodownunder, a small bed and bath product retailer in Sydney, imports about two thirds of its products from India.

Again, co-founder and owner Russell Lamb says the latest industrial action is just the latest in a string of disruptions — including factory lockdowns in India due to COVID-19 — that are delaying the arrival of goods, and increasing the price of shipping at the same time.

The biggest challenge, Lamb tells SmartCompany, has been trying to plan three or even six months ahead, not knowing what products he’s going to be able to sell or whether his physical stores will be able to open.

“You’ve just got to be able to roll with it.” 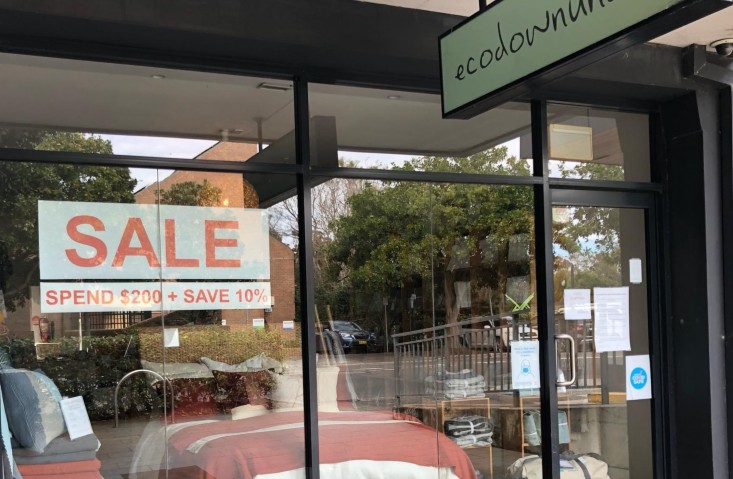 Lamb is now trying to stay a few steps ahead, increasing orders to make sure they still have stock.

During the COVID-19 pandemic, this business has shifted to sell much more online, so Lamb has also increased the range available to cater to a broader customer base.

All of this means more warehouse space is required, and more overheads.

Ecodownunder has so far been able to absorb the extra shipping costs.

This is partly because the online business has been going well. Where the business was previously about 10% online and 90% in-store, when the pandemic hit, it shifted almost overnight to 50% online.

Lamb has actually closed some of the physical stores, cutting down on expensive rent, and freeing up some funds for the extra warehouse space.

“It just means that we’re not able to pass on as much price reduction as we planned as fast as we would like,” he explains.

Fisher, on the other hand, is considering what she can do to try to boost sales in the New Year. That could mean changing up her marketing budget to include more influencer marketing, for example.

She’s also upping promotion efforts on some of the products that are not necessarily top sellers.

When it comes to the extra costs of shipping, she has already increased prices slightly once this year. Her products are already at the higher end of the market, she notes, and there’s a balance to be struck.

“If we increase any more, sales just won’t be as good.”

The federal government will stop its support for the NSW JobSaver program from October 31, but the scheme will continue for another month.

SMEs across the country are reminded that applications for a number of state-based business support programs will close this week.