The life and death of a Melbourne shopkeeper

A portrait of Soner Kurtoglu left by mourners outside Ni-Sa Deli in Richmond. Source: supplied.

“My work is like a saucer of mercury” – Shopkeeper in Qur’an.

You had to be up early in Richmond to beat Soner Kurtoglu out on to Bridge Road. Winter dark or rosy dawn, he was there, piling in the trays of loaves, pushing out a cart of oranges and bananas, lighting up the single-front Ni-Sa delicatessen, at the street’s dowdy end, between The Suit Concierge and Blessed Vision wedding wear.

White-haired, compact, in a sleeveless puffer jacket, ringing with energy, he ran back and forth between setting up and doing fruit juices for early customers and, as the morning wore on, filling the small-order groceries from shelves loaded with tins of Turkish dolma, eggplant, Polish chicken paste, mackerel salad, sacks of pine nuts, feta in wet buckets, the service somewhere between DIY and old white-aproned attendance.

As evening came on, he restocked the front of the shop from the back, pouring sacks of almonds and walnuts into their wooden housing. The shop only closed before 9pm these days because of the curfew.

The place was always open, and it was almost always Kurtoglu running it. And then three Sundays ago it wasn’t, and it stayed closed for two weeks. And then came the news that he was gone, taken by COVID-19 last Friday.

Hearing the news, in one of the cafes just holding on at this dowdy end of a dowdy shopping street, had that strange feeling that the news of some deaths do — as some sort of mistake, a clerical error. I live two doors down from the place, was sometimes in there three times a day, taking the great advantage of such a shop, that of not having to do a shop, the miserable carting of self-sustenance from supermarket to car park. That’s just so fucking sad, I thought eloquently, cupping my hands to the glass front and staring into the shop, now still, dust starting to form, oranges going greenish, bananas going blackish. Sad, in part because it would be little remarked beyond this block or two.

But then the flowers started to appear on the pavement out front where the trays of fruit and veg used to be. And the cards, and the gifts. Simple bunches of — I don’t know the names of flowers — in brown paper first, more elaborate ones soon. Blessings and condolences in English, Turkish and Arabic. Small line drawings in frames. People gathered in twos and threes and stayed. They did the most extraordinary things. Greeks and Turks in darker clothes stayed, getting coffees from the local Blue Note cafe, a sort of chatty vigil.

Old Richmond Irish, who are very old now, in brown jackets and grey flannel slacks, stopped by, some with string shopping bags in their hand, like some salute to the trade. A woman in full veil and robing knelt on the pavement and wept and had to be gently coaxed, pulled away. Some type in tracksuit and sweatband yakking on a mobile phone came by, typical new Bridge Road jerk, I thought, and then he stopped, and without stopping talking, undid his small silver neck chain and hung it on the door handle, and kept on, still talking.

This, I guess, was the funeral you would once have had here, with the cable trams stopped, a hearse pulled by black-clad horses, with muffled drum.

This is how it happens now. 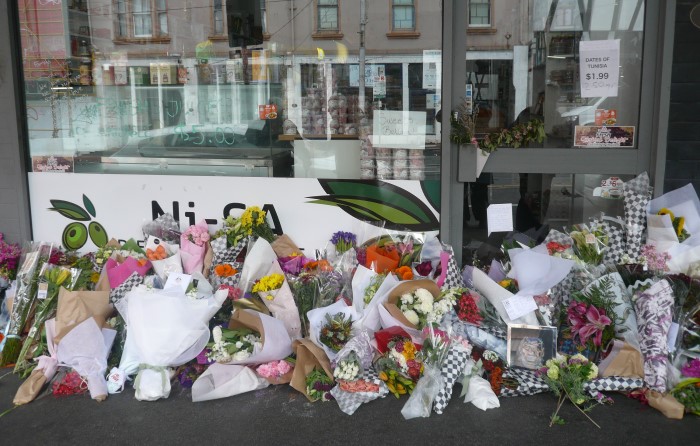 What was most amazing was that Kurtoglu had only opened the Ni-Sa just over a year ago. A shop usually has to be somewhere for decades for this sort of effect. But what is so great about the Ni-Sa is that it was just a grocery. It aspired to be nothing more. It was mysterious and exotic and unique simply by stocking what people around here wanted. It had Coke Zero and pickled walnuts in brine, Macedonian beetroot pate and sponges. All Kurtoglu had wanted to do was have his own place, having worked for two decades at Sonsa deli in Smith Street, Collingwood, and he inhabited it.

What happens to Australian communities when their small businesses close?

Kurtoglu didn’t work hard; he was work, he was made of the ceaseless motion required to keep it going. But if he ever found any of it to be drudgery, it never showed. As this end of Richmond has slowly started to come apart, his shop knitted it back together, precisely because it wasn’t — no shade to those who are — a place selling waxed goat’s cheese for $17 a slice, or $30 artisan muesli, or wooden handicraft toys, or pulse kickersize classes. It was the stuff of life itself, and here at this asphalty corner you could have been on a one-store Aegaen island, or a stone village in Cappadocia.

That’s what it was, I suspect, for many: the simple delight that we could have again, what we had once: a shop that was unique by specific way of doing what is utterly common. The slow death of such shops, the remorseless advance of chains and franchises, is the death of the city, is death itself, because the whole point of franchise — from Starbucks to Bed, Bath and Beyond — is to imitate the particular, in a way that can be generalised across the world.

Brands dodged up by conglomerates of accountants, franchisees suckered in, and then de facto proletarianised in miserable service to an invariant copy — the attempt is to pattern consumption as the factory patterned production. Since consumption is how we live for the moment, it’s an attack on life itself, a slow leaching of spontaneity, variety and chance.

Surely the chief joy of being a shopkeeper is that particularity, the freedom to have the place exactly as you damn well please. And equally the joy of having such a shop, the real encounter, that says this place is here and nowhere else is quite like that.

Hence the mourning here. People understood that life had returned in some small way.

The point is, first, that everyone who has seen small shops disappear feels miserable about it, and second, that a world of franchises is yet another depredation of capital on life. There’s no “freedom” at work in the rollout of yet another donut franchise: simply the crowding out of options for those with less margins to open one single shop.

Leaving it to “the market”, as Labor’s neoliberals (and a few in the Greens) are happy to do, isn’t an option, since franchise capital is the anti-market, that which destroys actual markets. Anyone or any party which retains even a skerrick of resistance to the annihilation of life and meaning by these forces — which Labor once had a position on — must have a mind to how we revive that feature of urban living. Kurtoglu made it possible by working 100 hours a week. There should be ways of doing it, via commercial rent controls, low-interest loans and the like that don’t demand that.

Coming out of the world’s longest lockdown is an opportunity to be innovative on that score in Melbourne and, really, state and local governments have no choice but to be so, otherwise the whole place is going to be Coles, Woolies and hot-pot restaurants CCP apparatchiks use to store their money.

Kurtoglu’s family say they’re going to keep going with the Ni-Sa. Good luck to them, but it won’t be easy to do what he did, a blur among the tall shelves of his small bazaar, now vanished. Making it easier to do what he did would be some sort of memorial, an act of faith towards the world that Labor once sought to make, when the flowers are cleared away, and the vegetables and fruits return once more.

Small business owners are not OK, and we need to address it at the cause

Many businesses are running on fumes, racking up debts and desperately trying to keep their heads above water. There is nothing ‘OK’ about it.

“Are we being heard?”: Cairns small business owner shares the struggles of COVID-19

Renae Kunda operates Cape York Motorcycle Adventures in regional Cairns. Here are the struggles the business is facing during COVID-19.