Mic off, clothes on: Five ways to maintain your integrity and sanity when videoconferencing

A few weeks ago video meetings were something you only really did if you had an American head office, and now it’s our whole life. Turnarounds that fast get confusing.

Some of you might remember my mum from that time I took her on Weekend Sunrise and she was much more likeable than me. She loves a chat, and she’s alone in her house missing all her friends at the gym and shops. We just set her up with iPad Facetime so the whole family can check-in.

I called her up. She said, “I see you’re having some soup.”

I looked around the room. She has excellent eyesight and I had been making soup the day before. What tiny piece of telltale evidence had she spotted? Because mum skills never die.

I looked down and I’m wearing last year’s Scene Change promo t-shirt with the Warhol-inspired screenprint. 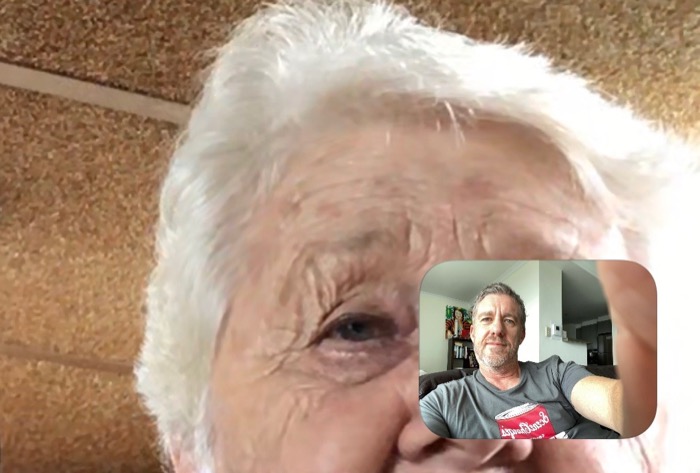 I realised that my own mother believes that I will get on a video chat while sitting on the couch, drinking Campbells Chicken Noodle Soup straight from the can, like it’s a refreshing beer.

Yeah, it probably has. Like wandering through other people’s Zoom conferences in your underpants, what was shocking in late-March is now just baseline survival normal. Personal presentation standards are in a worse free-fall than the stock market. Why not smash a few room-temperature soups while you’re at it?

No disrespect to my mum, who listens to these stories every week. (Hi Mum, love you!) Everyone finds videoconferencing a confusing, alienating experience.

I’m pretty comfortable with it, but last week I had to learn four different conferencing apps. When you’re the presenter and each app has completely different buttons and menus, it’s pretty easy to come across as a bumbling fool.

So this week, a few pointers to be your best on-screen.

The videoconference medium offers so many ways to look like a murderer.

The worst is the desk-in-the-corner look: bright light behind you and none in front so you’re just a silhouette. You couldn’t be scarier if you were wearing full clown makeup.

Overhead fluorescent office lighting gives you raccoon shadows under your eyes, and skin colour like you just came off a three-week meth bender.

The best, cheapest option is to face a window that doesn’t have direct sun coming through it. You get a nice soft, diffused light that’s forgiving to the lumpiest head.

If you don’t have a window, invest in a ring light. They’re pretty affordable. They are super-popular among Insta influencers for make-up application vids, although if COVID-19 has a silver lining, it will be watching influencer faces slowly deflate over the next six months. The ultimate slow-motion spectator sport for the rest of us.

Jokes about vanity aside, your appearance on videoconferences messes with your head. As the lockdown months drag on, your general mental state will be helped by looking fully human on calls. It’s not that you don’t look good, it’s that laptop cams and lighting are brutal and it really helps to counter those effects. It’s not vanity, it’s basic sanity maintenance.

Laptop camera angles are set up to make you look much worse than you actually do.

They look up your nose. They make you tilt your head down and that gives you a double chin. Get yourself a laptop stand, or just use a box, to raise it 20cm or so and you will instantly look better.

Also, try to keep your face at least 40-50 cm from the camera. A lot of people lean right in like a submarine commander into a periscope. It’s not so terrible at icon size, but if you’re switched to full screen your head looks like a giant potato, blemishes and all.

Please. We can see you fine.

I did a Business Chicks webinar last week, co-presented with the excellent Lacey Filipich. We did all the tests before the show, it all worked perfectly. Hundreds of viewers logged in, the MC threw to Lacey in Perth, and… crickets. We heard one syllable in ten. Cue several long minutes of the MC filling dead air while Lacey chats to her laptop, blissfully unaware.

Lacey has two small kids, the natural enemy of the videoconference. Sure enough, they waited until the webinar kicked off before they started playing games on her phone, hooked into the home wireless. Welcome to 2020 and its Data Hunger Games.*

Uploads are the worst bandwidth killer. You can’t keep kids off devices all day for your regular video meetings, where you’re just one of many participants. But if you’re leading the meeting, those kids will sense your vulnerability and start torrenting Fortnite hacks or whatever. Your well-planned presentation is doomed.

Yet kids must be occupied or they’ll just come into the room and complain while you’re on the air.

Pro tip: hotspot the kids to your mobile data just before you start.

It’s not like you were going to use that data while being outside having a life, is it?

4. Videoconference apps are ratting you out

Should you feel private and secure using the popular videoconference apps?

Not a bit. They are snitching on you like prison inmates all the way. At least last week Zoom stopped sending your user data to Facebook.

But here’s a quick selection of Zoom fun facts. It has an attention-tracker so your boss can tell if you’re doing something more interesting during their PowerPoint.

From the Zoom terms: “It is the meeting host’s responsibility to notify participants if this feature is in use.” Hmm reassuring. There’s also the private message post-meeting snitch. 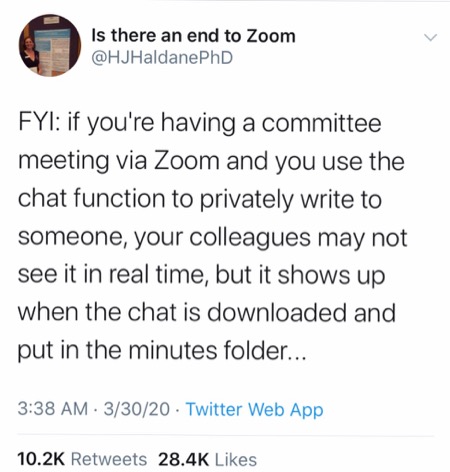 Sure, Zoom is a handy tool for business communication, but does it also have a feature to help hackers install malware and breach your entire network? You bet it does.

I’m sure they’ll block the security holes quickly but the snitching options, not so much. Assume everything you do on videoconferences will become public knowledge.

When someone else says it better than I can, I’ll let them do it.

Please, nobody wants to hear your snacking at close range. Sure, you’re at home, but it’s a real meeting. You’re only one mouse click (or non-click) away from being a viral sensation like this or Potato Boss in the photo at the top.

That blank white Zoom screen that says “please wait for your host to start this meeting” should carry a flashing warning that says: “no further clicks required for your camera and mic to switch on AUTOMATICALLY, and your host might START THE MEETING EARLY LOL”.

So be dressed. As long as there’s a single computer on in your house, stay dressed.

And that, folks, is what business advice has come to in this magical year.

*Late update from Lacey: “Since that webinar, I now have two wireless options. Got a second one, just for me, no one else in the household has the password. My kids don’t know it exists yet, and I’ve named it obscurely so they think it belongs to my neighbours.” Strong move.

NOW READ: Five ways to stay productive and sane while working from home