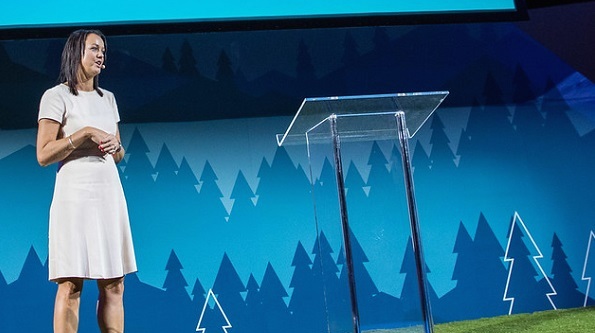 Wendy Johnstone made a proactive decision to continue her leadership career after having kids, but admits that during the interviewing process for her latest role she never mentioned her family life.

That was four years ago. Johnstone got the job with Salesforce and now leads the tech giant’s marketing team across Asia Pacific.

Her kids are now five and six, but Johnstone still wonders why she didn’t share the life she had going on outside of work.

“Unconsciously, I didn’t mention that I had young children at home,” she says. “I think I might have been worried that people might question that.”

Once she started, she found she’d worried needlessly, with nobody questioning her when she gets to the office late in the mornings, or has to leave early in the afternoons.

“I now really encourage other women to talk about it [their families], to be brave, and to set their own expectations when they join an organisation.”

“We have an opportunity to set an agenda and communicate how we need to operate because we have a family,” she adds.

“It might not always be children. It might be caring for an elderly parent or training for a triathlon. Everyone has their own things going on in life and we need to speak up about them.”

Having children was a pivotal moment in Johnstone’s career, and one that saw her shift from having little to no interest in women’s groups, to now being a leader and role model within them as an executive sponsor for gender diversity at Salesforce.

“I always felt that sometimes there would be a roomful of women with a door shut which I didn’t feel was necessarily the right approach,” Johnstone says.

“I’m a huge believer in having inclusive conversations and taking an inclusive approach to solving some of these problems, so we have to invite the men into these discussions. They’re the people in power. They’re ultimately the people who can drive change.”

Having had her kids later on in life after a senior leadership career, mostly at IBM, Johnstone says she found balancing home and work life tough and did a lot of “soul searching” before deciding she wanted to continue her career.

So she got to work talking to as many people as possible at Salesforce on what they felt the key challenges were.

“The one resounding thing that men said was that they wanted to get involved but that they didn’t know how, and needed women to show them,” she says.

While Salesforce’s global workforce is around 35% female, it’s leadership team is only 19% women. Having recently appointed a global chief ‘equality’ officer and invested $3 million in rectifying its gender pay gap, Johnstone says chief executive Marc Benioff is committed to getting to a 50/50 gender split in leadership, and that globally, the organisation is using a range of simple methods to aid in the recruitment and retention of women.

Locally, it’s addressed the language it was using in its job advertisements to encourage more women to apply, and now ensures women are included on the panels of job interviews. It also aims to connect female candidates with other women in the organisation.

“There are often questions as a female that you have when you’re in an interview that you may not ask a man,” Johnstone says.

Meanwhile, they’ve also rolled out unconscious bias training, and are working in schools and universities to connect girls with mentors and coding classes to help demonstrate what it actually means to work in tech.

“They sound like simple things, but they can have significant and positive impacts,” says Johnstone.

“But there’s still a long way to go.”