From a notepad to half-a-million users: How a founder with no experience created a successful app entirely on his own

Despite being a gym regular for more than 17 years, Aussie entrepreneur Adam First had been unable to find a single workout app which fit the bill.

“I’d been trying other apps in the app store, and most of them were clunky, crappy, had a paywall or needed a monthly subscription,” he tells SmartCompany.

“They were so bad I ended up sticking with just a notepad and pen.”

But scribbling down his reps and routines was, unsurprisingly, tedious, so during a ‘bugger this’ moment in 2017, First decided he’d have a go at making something better.

A Yarra Valley Water systems admin by day, the founder says he was partially helped by his background in IT but had to teach himself how to code in Java from scratch, a process which involved late nights and gratuitous Googling.

“I had no experience in coding, so I’d spend time at night after work doing online courses instead of watching TV. I had no external help, so any problem I ran into I’d just start Googling,” he laughs.

A completely one-man show, bar some design consulting from his wife, it took First six months to develop an MVP of his app, simply called Gym Exercises and Workouts. The process involved coding, designing, some photoshop work, and the creation of the content itself.

Not only a gym buff but also a competitive powerlifter, First did much of the heavy lifting on the app’s content, with the majority of the routines and workout plans being based on his own experience. The plans range from being for complete newbies to seasoned gym veterans.

The first version of the app was a basic ‘workout dictionary’ and logger, says First, but after three months in the Google Play store, he’d already had 25,000 installs and a good amount of positive feedback.

“I don’t think I would have continued to develop it if I didn’t get that positive feedback. I take the time to respond to every written review, good and bad, and I’ve had some users tell me that’s one of the reasons they love using the app,” he says.

“I’ve had my share of one-star reviews too, usually because the app doesn’t include a feature they want, but I respond to them as well.” 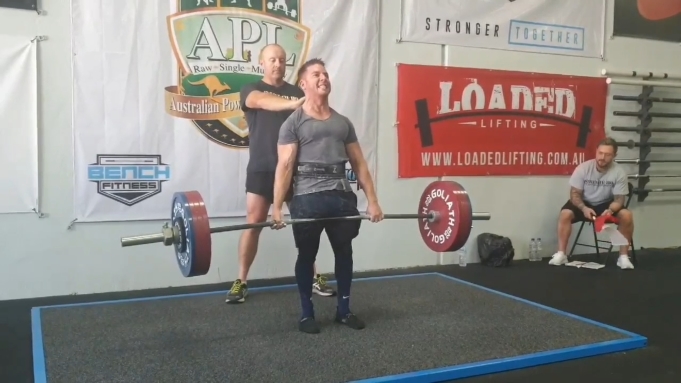 Adam First at a powerlifiting competition.

Today, First’s app has been downloaded more than half-a-million times and boasts more than 5,500 daily active users. The one-star reviews are clearly few and far between, as the app also has a 4.8/5 star rating on the Google Play store.

“Someone left a review the other day which said they used to hate training, and now they look forward to it thanks to the app. I think it’s fantastic I’ve been able to make something that can have such a difference,” he says.

“I try to include as many features as people ask for. I feel like I’m building a bit of a community there.”

Despite the app being free, ads are included, which First says was initially to cover database and website hosting costs. Today, the ad revenue covers those costs “plus a little extra”, but the founder says he’s unsure if it’s something he could ever see himself doing full-time.

“I haven’t really thought about it. I love where I work now, and it’s been great to be able to do that and then come home and work on this when I want to,” he says.

“I don’t know if I’d ever become a full-time developer, but I definitely do enjoy it.”

Though just a “side hobby”, First’s app has attracted international attention, with the founder currently in negotiations with a smart garment manufacturer to help integrate the app with their products. The majority of the app’s users are international too, with just 5.5% being from Australia.

Creating an app yourself entirely by scratch is no mean feat, and First says there were times when he felt like giving up, usually when faced with a particularly tricky piece of code.

“I had times when I was stuck on one piece of code for weeks on end, and I’d be thinking: ‘If I can’t get this, how can I proceed?’”

“But the goal was never to just get lots of users, it was to make the app as good and as functional as I can.”

There were times when First considered asking for help, usually when he’d receive feedback telling him the app was “ugly”.

“I thought many times about getting a designer online and just doing the backend coding, but every time I just kept pushing myself,” he says.

For other aspiring founders with potential app aspirations brewing, First says it takes a lot of determination and hard work.

“Then it was just a lot of nights after work, coding and learning more about what I wanted to do. If you want to do it all yourself there’s no quick fix, it all takes time.”

NOW READ: “How hard could it be?”: How a neuroscientist became the owner of a caravan park on the Nullarbor