How Adam Pope is completely changing his corporate catering business after losing $55,000 in bookings in two days to COVID-19

Some members of the Fabulous Catering team. Source: supplied.

On a regular Monday, Melbourne entrepreneur Adam Pope would receive about 50 new enquiries for the catering company he runs with his wife.

But that was before the outbreak of COVID-19.

This week, Pope says his teams have received just three new enquiries, and there are only 18 jobs on the books.

On Monday and Tuesday alone, the business saw $55,000 worth of bookings cancelled.

Pope has operated his business for 13 years and the company turns over about $5 million a year.

But a large chunk of that revenue is now in jeopardy as several major contracts have come to an abrupt halt.

Pope tells SmartCompany that over the weekend it started to sink in just how dire the situation is — and the speed at which his business needs to respond to the crisis.

The first step in that response has been to launch a range of ready-made, frozen meals that individuals and businesses can order to be delivered to people’s homes, including a special ‘isolation pack’, designed to get anyone through a 14-day period of coronavirus-induced isolation.

The meals are priced from $9.95 each, and the company is offering free pickup and delivery within 15kms of Melbourne’s CBD.

“We thought, well what have we got?”

“We’ve got fridges and freezers, and the wholesale food chain is unaffected. We can still get pasta, mince meat. All the things that are in Coles, we can get, apart from toilet paper,” Pope explains.

“We had to think quickly.”

It’s a new frontier for the business, but Pope says it has all the infrastructure and systems already in place.

“With large quantities of people now working from home, and there also being a very big worry about hygiene, we can offer a full contactless option,” he says.

“Orders are online, there’s no cash handling, the meals are delivered on ice and taped up in a box, our drivers all have hand sanitiser and gloves.”

Pope says the business is also working to offer consumers food packs containing all the ingredients they will need to prepare their own meals, as well as meat packs that contain everyday products that are now seemingly not available on supermarket shelves. 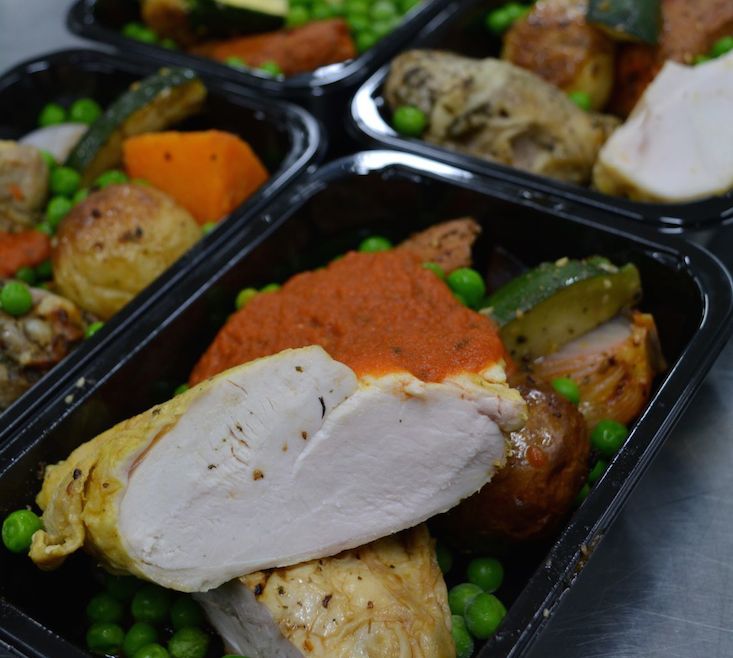 To say it has been a stressful few days for Pope and his team would be an understatement. But the 35-year-old business owner is optimistic, and focused on preserving as many jobs as he can in the business.

Many of the company’s 180 employees are casuals and Pope says the amount of work he will have available to them will depend on how well this new business model works.

“We have some full-time employees and we’re prioritising fieldwork for them; we have some existing functions still on,” he says.

“We are getting our office staff to do deliveries so there’s no loss of jobs.”

While Pope believes some of the already announced government stimulus measures will help his business, he says savings of a few thousand dollars won’t necessarily make a difference.

A number of state governments have said they will waive payroll tax obligations for small businesses and Pope says that would “absolutely benefit” his company.

On the other hand, if his business was able to delay payments associated with business activity statements and Pay-As-You-Go withholdings, Pope says he would be looking at savings to the tune of $30,000 to $40,000 a month.

Pope would also like the government to consider allowing business owners access to superannuation savings as a means of investing back into their own businesses.

“I’ve got a bank of super that I can’t touch, sitting there not earning much interest,” he says.

“I would much prefer to invest it in my own business, rather than it losing money on the stock market.”

Pope says a number of business owners he speaks with via a Facebook business group feel the same about their savings, and it’s these groups, along with his own personal network of business owners, where he is finding the most support and information about how to survive these difficult times.

“There’s only been snippets of information,” he says when asked about if the federal government is doing enough to keep businesses informed. In particular, the confusion about whether large-scale gatherings would be prohibited affected a number of events booked with Fabulous Catering.

“You have to go searching yourself,” he adds.

“There’s mixed messages on what can be done and what can’t be done.”

NOW READ: These bookshops are offering free local delivery for readers isolated because of coronavirus