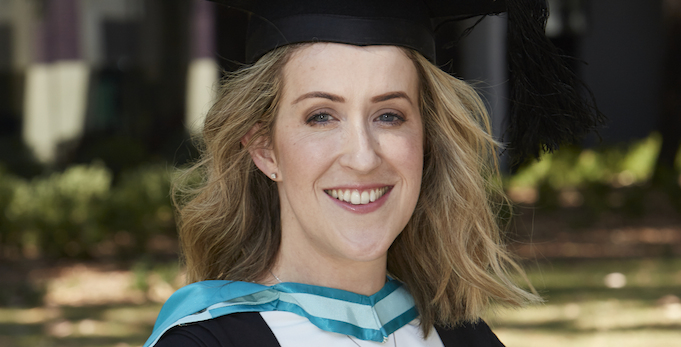 Beauty advocate Kate Morris, chief executive and founder of Adore Beauty, started Australia’s first beauty e-commerce site in 1999 from a garage in Melbourne at the age of 21. Starting with just $12,000 and two little known cosmetic companies on board, Adore Beauty has grown to more than 165 authorised brands and over 12,000 products, and attracts millions of visitors.

Here Kate speaks to graduates at the graduation ceremony at her own former University, Monash University, on three lessons she wish she’s heard when she was younger.

When I cast myself back to my graduation day, I think about what my life was like back then.

I’d had four part-time jobs, and been fired from two of them. Realising it was up to me, I’d started my own business: an online beauty store, based out of the garage I shared with a flatmate in Murrumbeena. I’d finished the last eight subjects of my degree by distance education, so that I could work on the business during the day and study on the weekends. I was living on mee goreng noodles out of a packet, and I hadn’t bought new clothes in, oh, three years? I was full of hope (and also desperation!).

I wish that on my graduation day, the speaker had shared what they did that was important to their success. So today I’m going to share with you the three things, in my experience, that are actually important.

1. Ideas are much less important than actions

A lot of people think that being successful in business is about having a big idea. A stroke of genius. Thinking of something nobody’s ever thought of. The truth is that ideas don’t matter anywhere near as much, as the ability to get stuff done.

I am not a genius. I wasn’t a child prodigy. I wasn’t the dux of my school. I did not graduate with straight high distinctions. My ideas are not better than anybody else’s.

One of the questions I get asked a lot is: how did you get started? Well, I studied business management at Monash University back in 2002, working part-time on a department store cosmetic counter. It was there that I realised that most women found department stores really intimidating — this high pressure sales environment, scary sales assistants looking down their nose at you. Beauty products are supposed to make us feel confident and empowered, but the shopping experience made us feel the opposite.

Now around that time I became aware of online shopping.  I’d seen beauty websites in the US, and thought, “gee, someone ought to do a beauty website here. I think there are a lot of people who would prefer shopping that way than having to go into a department store”.

This was not a brand new ‘world first’ idea. I’m sure plenty of other people had this idea around the same time. The only difference between me, and the others with the same idea — the only difference — was that I got it done. I didn’t have some secret entrepreneur gene (my parents are social workers!). I didn’t have any money, so I borrowed $12,000 from my boyfriend’s dad, and then I called every IT company in the Yellow Pages until I found one that could build me an online store.

How did I get started? There was no genius moment. I just put one foot in front of the other and got stuff done.

So many people think that if you’re successful in business, it was because you made better decisions. You had better strategies. You outsmarted your competition. You failed less often.

Maybe for some people that’s true, but not for me. To use a boxing metaphor: I could not float like a butterfly, sting like a bee. I just learned how to take the punches. I went down many times — but I just kept getting up off the canvas. When I was trying to get my online store started, my major challenge was getting the beauty brands on board, because they all refused to supply me. I heard the word “no” in that first year more than I’d ever heard it in my life.

Some were nice about it, and tried to let me down gently: “Honey… nobody is going to want to buy things on the internet”. Some of them were not so nice. I remember one in particular — they faxed me a letter basically saying that my idea was stupid and not even worthy of their consideration, and following that was 14 pages, rolling out of the fax machine, of thumbnails of the covers of all the magazines they had been in ( “don’t you know who we are”?).

Was it devastating? Of course! Did I give up? Hell no.

I thought, okay then, if the big guys won’t take my money, there must be someone who’s desperate for the cash. Eventually I found two tiny brands that nobody had ever heard of, but that was okay, it was enough to get the site up and running. And then I went back to everyone who’d said no, and five more said yes. And so on. Estee Lauder said no to me for 14 years — 14 years!

I can guarantee you that in your career, there will be times when people say “no” to you, or try to put you down, or hold you back. And especially If you try and do big things, to challenge the status quo, the greater the resistance will be. You will get knocked down — but you get to decide whether you stay down, or get back up.

Integrity to me means having a very clear grip on your values, what you stand for, and sticking to those values even when it’s difficult.

Here is something that is going to sound a bit strange but bear with me: the universe will reward you for having integrity, and being bold enough to stand up for yourself and for others. This is not to say there won’t be consequences in the short term — there might be. But in the long run I promise you, it’s going to be worth it.

As I mentioned at the start, I’ve been fired — not once, but twice. Both times for refusing to tolerate managers who mistreated their staff. Being fired is not fun. It’s upsetting and demoralising, not to mention terrifying to wonder how you’re going to pay your rent. But it’s inspired me to create a business that does the right thing by its staff, by its suppliers, and by its customers. There is something pretty wonderful about that sense of trust. I know that my team have got my back, because I’ve got theirs.

I’ve also noticed this effect since I started speaking up about gender equality. I’d always been discreetly feminist, but last year I attended a business awards ceremony that was so outrageously sexist and the following week Donald Trump got elected. I got so furious I couldn’t stand it any more. I thought, you know what, I cannot keep quiet. I don’t care if this is bad for my career.  I have to say something, even if the consequence is that I never win another award.

So I started speaking out. I’ve used my profile since then to publicly call out sexism wherever I see it — the all male panels, the conferences with no female keynotes, the awards ceremonies MC’d by Eddie McGuire. I expected a backlash.

What’s actually happened since then is that the growth in my business suddenly went from 60% to over 100%. I became the first ever female winner of the Online Retailers Industry Recognition Award for my service to gender diversity. I’m nominated for Cosmopolitan magazine’s Women of the Year awards. I’m getting messages every day on LinkedIn from extremely talented people who want to come and work for me.

It is not always easy to do it, but good things come from living your values — especially when it’s hard, and costs you something to do it.

Thanks Alex, glad you liked it!

What a great article. This is ‘inspired reading’ for all start-ups. I’m going through multiple challenges at the moment and this brings everything back into focus. Thanks for sharing.

Thanks for sharing your journey Kate Morris. Your article is inspirational. Your success is well-deserved.