Ain’t nobody got time for a hangover: How these Aussie business founders discovered their niche

James Hookway and the Hangover Helpers team clean up after their clients and even bring them breakfast. Source: Supplied.

Discovering a gap in the market is one sure-fire way to set yourself up for small business success. From here, think up a business idea that helps people find their way out of the depths of despair, and you’ve got a winner.

Sydney’s Hangover Clinic was the first of its kind in Australia, opening in late-2015 to help those who have over-indulged the night before get back to feeling normal through the use of IV fluids.

Hangover Helpers, a business that launched in Perth in August 2015 and 10 months later in Melbourne, is also capitalising on the trend by cleaning up after parties that may have gotten a little wilder than expected. They’ll even bring you breakfast.

Hangover Helpers founder James Hookway said he and his wife Hayley came up with the idea for a post-party cleaning business the morning after a big party at their own place.

They decided to value-add to the cleaning deal by also bringing breakfast — either a greasy or green breakkie, depending on the host’s preference.

“We had a party at our house around Christmas and we were lying there after thinking how good it would be for someone to come in and clean up the mess — and bring us some breakfast. So that’s honestly how the idea came about,” Hookway says.

Hookway, who works as an accountant for JB Hi-Fi during the week and as a hangover helper on weekends, says his startup capital was about $25,000.

“The biggest thing we needed was the branding and the website. It was a bit of a pipedream at first, then we did some research in the market and there was nothing out there similar to what we were thinking of doing,” he says.

“This is just a weekend business for us, a bit of a hobby company that I’m trying to expand.” 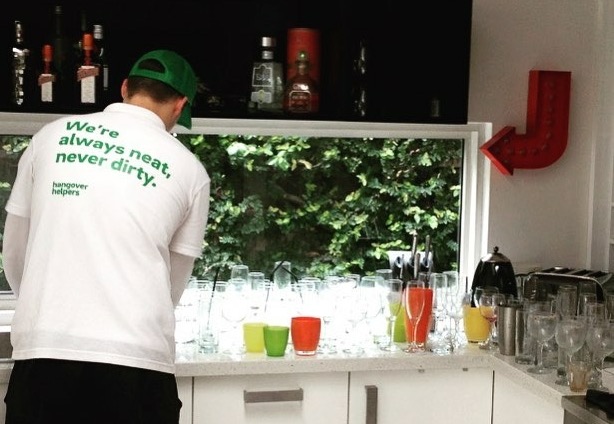 Hookway says word-of-mouth has been the business’ best marketing tool and within 18 months of operation, the business has increased its employees, new and repeat clients and turnover.

“We’ve got three teams of two in Perth and two teams in Melbourne. Ultimately, we’d like around two to three teams in each state and I think Sydney will be our next market,” he says.

“We’re not one of those huge turnover businesses, but from that first year, we’ve doubled our revenue. We’re doing between 100 and 150 cleans each year, and we’re in that $30,000 to $50,000 a year turnover bracket, which is pretty good for weekend work. It’s doubled since our first year.”

Hangover Helpers is currently looking into subcontracting options and expanding into other areas such as pet helpers, in a similar way to the Jim’s Mowing model.

Hangover Clinic co-founder Max Petro has a similar business inception story. The former senior associate at a law firm was working as a ski instructor in Australia and the US when he noticed after a big night, the ski patrol team would always be fresh the next morning.

They let him in on their secret of using IV fluids, oxygen and painkillers — and the Hangover Clinic was born.

Opening in Sydney’s Surry Hills in December 2015, the IV clinic fought off some initial controversy to become Australia’s first.

The business provides in-clinic treatments, as well as offering in-house or hotel treatments for those too fragile to venture out.

“It was a bit of a leap of faith finding our niche given nobody had ever done this in Australia, but we were confident this was something the market would be receptive to,” Petro says.

He says starting up was expensive but the business has grown “astronomically” since launch.

“The largest startup costs were our legal bills. Despite our fancy name we are a medical clinic and therefore operate in a highly regulated environment, so there were a lot of compliance obligations we had to satisfy with the relevant authorities,” he says.

“Now we’re well into our second year we have quarterly sales data to compare with, and our comparative sales from this time last year to now have increased ‎by more than 100%. We had over 100 customers in our first 10 days of opening and we haven’t stopped since.”

Petro says he had already expanded the services offered by the clinic to meet demand.

“Innovation has been central to everything we’ve done — we started with hangovers in our clinic, then launched home service, and added in IV vitamins and botox a few months after,” he says.

“We have a very engaged membership base who come in regularly, and that’s been our main source of growth.”

NOW READ: “Absolutely powerless”: Business owners are having their ideas stolen, but what can they do about it?

NOW READ: David versus Goliath: How SMEs have taken on big business and survived