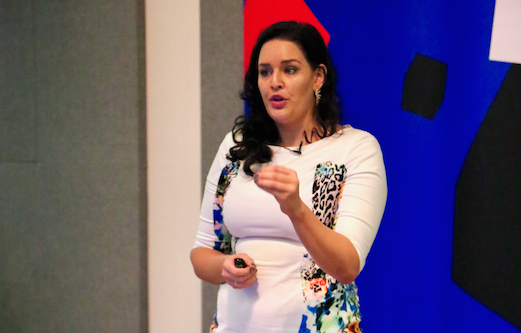 When Blaise McCann is asked to describe her retail marketplace for women’s fashion, she is emphatic: it’s not just a business.

“[It’s] about empowering women to feel good about what they look like … [to] find clothes in their size.”

McCann is the founder of Hear Us Roar, a two-sided marketplace for ‘plus-size’ or ‘curvy’ women’s clothing.

Launched three months ago — and born out of McCann’s own experience as a model for the past 10 years — the retail platform connects local fashion designers who make women’s clothing in larger sizes with customers who are looking for exactly that kind of clothing.

Hear Us Roar currently sells items from 10 designers, holding some of the stock itself and drop shipping other items. The goal is to build the platform into a global marketplace that can also shine a light on Australian fashion designers.

This month, McCann is one step closer towards that goal after winning the $5,000 top prize at the University of Technology Sydney (UTS) Hatchery Accelerate Demo Day at the end of November.

Having now completed the three-month Hatchery accelerator program, which includes workshops, mentorship and an equity-free $2,000 grant, McCann says she intends to invest the Demo Day prize money in advertising her business — something she has yet to spend a dollar on.

Even without advertising, Hear Us Roar has racked up $10,000 in revenue from McCann’s own networks and to date, she’s sold clothes to five recurring customers — a detail that she is proud to share.

“It’s such an emotional problem,” she says of the search many Australian women have for clothing that will not only fit them, but be suited to their age and lifestyle too.

Department stores in Australia are seriously missing the mark in catering for women who wear bigger sizes, says McCann, and the specialty fashion retailers aren’t much better. While it is more common to find options for older women, McCann says for younger shoppers, the lack of ‘cool’ options is frustrating.

“People say to me, ‘you’ve found a niche’, but it’s actually not a niche,” she says, referring to average dress size of Australian women being around a size 16.

“It’s a bad business decision if you’re not catering to average Australian women.”

McCann doesn’t have a specific age in mind when thinking about who she hopes will shop with Hear Us Roar. Instead, it’s more about whether or not the customer shares the same values as the business.

“It’s not my job to say what you can and can’t wear at any age,” she says.

The brand, she admits, is “youthful” and perhaps “controversial”, but that shouldn’t dictate the age of the clientele.

McCann is aiming for $500,000 in sales next year but says the overall market opportunity for high-quality, on-trend women’s clothing in larger sizes is massive.

Drawing on IBISWorld research, McCann says the market for ‘plus-size’ women’s fashion in Australia is worth $817 million, and is growing at an annual rate of 4.4%. It won’t be long before the market hits the $1 billion mark, says McCann.

But, she points out, those figures are based only on current spending. With more choice in the marketplace, there’s no reason why that figure won’t grow even faster, says McCann.

Globally, she says the market for larger clothing for women is closer to $20 billion. And with other Australian startups, including Showpo, also now catering for larger sizes, it’s clear that McCann’s not the only one who can see the potential opportunity.

“Hear Us Roar stood out because Blaise has set out to solve a deeply painful problem for a substantial cohort of the population that has been neglected by mainstream retail,” Wong said in a statement.

“It’s clear she really understands her customer. My advice to her, though, is to think about how she can grow bigger, faster and build long-term defensibility around her offering. Amazon and others are never too far behind.”

Speaking directly with her target market has been a key part of the process of starting up, says McCann, who relays stories of connecting with women through Facebook groups to validate her idea for Hear Us Roar.

Through a number of in-depth interviews, McCann says she came to understand the emotions behind the shopping decisions she will be asking people to make. Many of these women she spoke to ended up in tears when talking about their search for clothing that would make them feel good about themselves.

But McCann is aware that the conversation must continue too. That’s why producing content for Hear Us Roar will form a big part of her plans for 2018.

“Content will be massive,” she says. It will be about building up the brand but also talking to women about their willingness to spend money on themselves.

“It’s definitely a challenge for me. Some of my items have higher end prices …. And it’s challenging because some of these women are not used to spending money on themselves. It’s about trying to unlock the buying potential of the customer.”

McCann believes the skills she has picked up through the UTS Hatchery program will hold her in good stead as she tackles this challenge, as will her networking skills.

“I was known as the professional networker,” she says of the UTS cohort, recalling plenty of occasions where she was able to help fellow founders connect with the right people for their businesses.

“The startup community in Sydney is insanely amazing. The time and energy people have put into me in the last few months … I wouldn’t be here without their support.”

And then there’s the drive and passion McCann says she’s picked up from growing up in a family of business owners — her parents “never had bosses”, she says — and previous work in sales.

“There’s always been an element of doing something myself,” says McCann.

That’s right. Our family was dyed-in-the-wool customers of david Jones until they started all that boutique and bling stuff, and dropped their house brands St James and DJ. Now we rarely set foot or seek online for DJ. You have to stock the clothes the people want. Fletcher Jones is doing well as a purely online entity with clothes that are wearable.