Class of 2007: Lobethal Bierhaus co-founder Alistair Turnbull on how he’s been keeping his brewery in its “sweet spot”

Alistair Turnbull co-founded South Australian brewery Lobethal Bierhaus in 2007 after spending 25 years in the banking industry. Seeking a sea change, Turnbull drummed up the capital and returned to his hometown to establish his brewery in the Adelaide Hills.

The business produces 12 different beer varieties that can be purchased in more than 100 locations in South Australia, and employs a team of 22. But while the craft brewing sector has boomed over the past 10 years, Turnbull says not getting too big has its advantages.

What inspired you to establish your business 10 years ago?

I was in the banking industry for 25 years, but I was always really keen to run my own business.

I wanted to call all my own shots without a bureaucracy telling me what I can and can’t do; I wanted to back my own judgments. While I was working in banking I kept my eye on what businesses I could start, and I saw the fledgeling start of the craft brewing industry in the States and thought I could do something with that. When I had the capital, backed myself and gave it a go.

What were you doing before running Lobethal Bierhaus?

I worked for 25 years in the banking industry so this was a sea change. The last place I had worked was in London and I’d been overseas for 15 years, so I was keen to come home to Australia. I have always enjoyed beer, and it was something different to get away from the banking industry.

I knew I wouldn’t be able to do what I wanted to do unless I relocated, so I came back to the town where I was raised. There’s been plenty of challenges, but at the end of the day my heart was here. 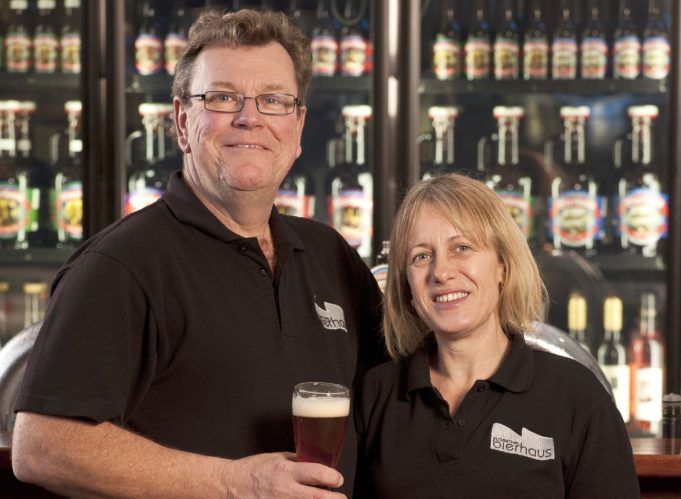 How different is the craft brewing industry today compared to 2007?

Since we started it has boomed. Initially, we thought we might have missed the boat because it was already getting pretty popular, but in hindsight, we were at the start of the best time to kick off. We were still making those sort of growing pain-type mistakes, but we were growing at such a rapid rate it didn’t matter.

That’s not saying we haven’t got a way to go. If you open a brewery today you have to be a bit more savvy in the way you do it. You can’t afford to make mistakes like we did or it’ll gobble you up pretty quick.

Ten years ago, you were craft beer and then there was the rest. Nowadays it’s almost the tail wagging the dog — the industry as a whole has just exploded. I first thought about entering the industry in the mid-1990s when it began to kick off in America. We had a similar market profile to the States, with the industry dominated by a few key players. The hurdle obviously was that I had to learn how to brew.

What challenges have you come up against?

I’ve struggled with always making decisions about how big you want your business to be, along with decisions about where you do and don’t place your product. We also found it hard to find the right staff when the business got too big to appoint them on my own. I would always prefer to be at the coalface rather than sit in an office and writing rosters.

I’ve passed on opportunities because I didn’t want to turn into a big national brewery. We’re managing 200,000 litres of beer a year, and we’re not trying to turn that into 1 million litres next week. I worked out a sweet spot — our wholesale sales are balanced in percentage terms on what we sell internally, and we have an overall growth model target which keeps both sides contributing their portion. The choice was a bit about lifestyle as well, when I started I wanted to make beer but not get too big.

Primarily it’s being able to live and die by your own decisions. We’ve also got 22 people who work for us, mostly students, so it’s nice to give something back to the area. When someone starts with you as 16-year-old, and you see them leave five or six years later, that’s pretty rewarding too.

The hospitality industry can be brutal in regards to feedback, so when you stand at the end of a room with 200 people in it, having a wonderful time and enjoying what we offer, that’s pretty wonderful in itself.

I bought things I probably could have waited on, but they were just day-to-day decisions. I don’t regret anything I’ve done, particularly in regards to the career change. I often wonder why I didn’t do it 10 years sooner.

What do you think are the three most significant factors that will affect your business in the next 10 years?

Competition is one part of it, so is the region that we’re in. We’re about 45 minutes out of the city and not on a major tourist trail. The area has become much more of a destination over that last 10 years — the wine industry is to thank for that partially — but it has ways to go yet. As that develops, it will change things — we were once the only ones offering what we offer in the area.

We’re on our way to becoming an institution so the size issue will continue to be a challenge. Reluctantly we will have to be a bit bigger, so I’ll be keeping my eyes on our economy of scale.

We’re in a better position now than we were 10 years ago. We’ve had all the pains, and gotten all that on board. There are lots more people out there interested in craft beer and it’s a totally different industry overall.