Class of 2007: WINK Models founder Taryn Williams on overcoming being a “control freak” to build her business

After a stint in the modelling industry, serial entrepreneur Taryn Williams saw a lot could be done in the sector to streamline processes and payment for models working across Australia. She took these observations and spun them into $3 million talent agency WINK Models, a company that committed to pay models in a seven day window.

Since the business was launched 10 years ago, the industry has faced a number of changes, not least the advent of social media and the way it has changed the type of work available for models. Williams tells SmartCompany that while she’s loved building up the business and having control over every part of it, she wishes she’d brought in the expertise of others sooner.

What inspired you to start your business 10 years ago?

The reason I launched it was because I could see it could be done a lot more efficiently in the industry. We were the first agency to pay models in seven days, we still do this. I think that has changed [since we started] … a lot more agencies are paying monthly, now.

Well, now it’s a full team of people that are specialists in their field, and I’m not as hands on in the business. We have nearly 700 models Australia wide now. Probably back in the early days for us, it was very much still the stereotypical Caucasian beautiful females and males [on the books]. Now we see a much better ethnic diversity mix.

We see a huge request for more relatable, authentic talent, and consumers have become a lot more savvy about how their advertised to. That’s all been quite positive, especially when we launched a health division as well — we’ve seen that be such a growing trend in Australia.

Definitely the more mature-aged talent were very hesitant at the start, like, “I’m a mum with a couple of kids”, but now we get 250 applicants a week from that group, it’s crazy. 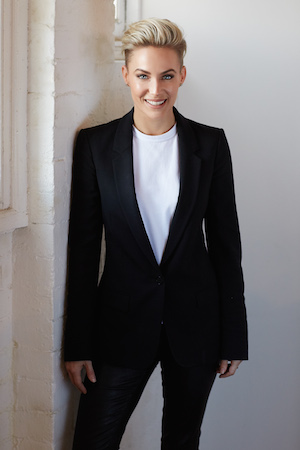 What challenges have you come up against?

The biggest challenge for me is definitely being a control freak. In WINK, I wanted to own everything, touch everything, be involved in every single job, getting down to every single tiny detail. That definitely stopped the business from growing in the first few years. I had to take a step back and say, “I’m the bottleneck here”.

So I learned that the hard way and [saw] it was preventing us from growing; I had to trust the people around me. As soon as I did that, the business just grew. We’re so lucky that at WINK, people really love their roles, and now I have a team of experts that I trust implicitly.

It’s definitely something I learned the hard way that I now apply.

In my opinion, the constant and diverse learning you have across so many different aspects, personally and professionally.

It brings me so much satisfaction to always be growing, developing and being challenged. As a business owner you get to be a part of everything from accounting, customer service, business development, and HR, which makes for a really unique opportunity. It’s challenging, but I love it!

It would have been hiring people earlier and finding experts in my field, instead of doing everything myself. Instead of going through the pain points on that, I think if I had hired people in the early days, it would have been a much more enjoyable process [of growing the business] for me. It’s incredibly difficult to find people [as staff] — I wish there was a silver bullet .

I’ve learned the hard way over the years to hire slow and fire fast. It’s about going through all the basics, but also trying to understand their goals and their vision. We just learned to be brutally honest about where we see a role going, and what role someone could play as a part of that, then asking, “Do you want to be a part of that?”

How has your industry changed over the past decade?

Social media was really not a thing until realistically over the past three years. It’s changed a lot for advertisers; it’s definitely changed a lot of things in our industry. It means there’s a huge volume of work now. Brands constantly have to produce things, but they have a shorter lifespan, so the pay rates reduce accordingly. They’re now producing a lot more much shorter content.

We’ve seen a re-allocation of budgets from advertisers, too. In 2016, online advertising surpassed traditional advertising.

We’re now seeing a lot more businesses that didn’t exist before that are now some of the biggest operators [in terms of advertising needs] … brands like The Iconic, that are we’re shooting really frequently.

What do you think are the most significant factors or developments that will affect your business in the next 10 years?

Consumers are so savvy now and they’re so willing to comment on social media; they’re so quick to voice an opinion, and brands are so savvy to that now. The advent of social media influencers is a really interesting space, and how that’s going to shape content is going to be really interesting. There are definitely brands requesting specific talent for campaigns, and using that for “authenticity”. They’re very savvy in looking for professionals in a field — they’ll look for professional athletes, for example, to work on a campaign, and they’ll check their social media first. Brands will look to check their social media “engagement”.

Brands here are quite aware that they need to be nimble and they need to adapt. We’ve seen a few top fashion brands fold over the past few years. I think brands are being more savvy, and I think we’re in a good space.

Because of the decrease in the barriers to entry, I think we are going to see more [retailers] entering the market, which is fantastic.