Class of 2007: Planetdwellers co-founder Mario Paez on why constant change is good for business

Mario Paez and his co-founder Barry Warner established LGBT travel company Planetdwellers in 2007, starting the business initially as a touring company before expanding to all sorts of travel. Taking on a third business partner to oversee the company’s IT, the Sydney-based business now employs around 10 people.

The business has encountered its fair share of challenges, from knowing when to take risks to dealing with disruptive players in the industry. Paez tells SmartCompany how he and his co-founder have seen the travel industry change and adapt over the past decade, and where it will head next.

What inspired you to establish your business 10 years ago?

My co-founder Barry and I were approaching the idea from two different positions, and we had a “we should do this together moment”. Barry was already running tours for the LGBT community in Sydney and I was regularly visiting holiday locations across Australia, [where] I would always end up taking tours in a van I hired out. One day we were talking about the idea and decided we should just do it. In the beginning, everyone called it “gay Contiki”, but it’s evolved into much more than that.

What were you doing before founding Planetdwellers?

Barry and I were both working for Flight Centre at different stores, so we got into the travel world that way. I also ran a food business for a while, which tried to introduce things like Portuguese custard tarts to Sydney. As we were living in the travel industry, we learnt a lot and saw a market there. It was a natural progression to start our own travel business. 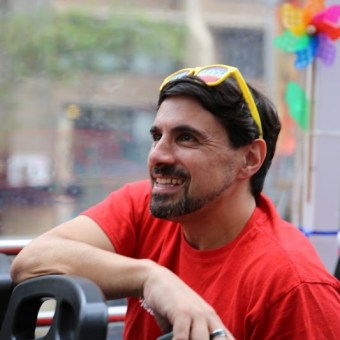 It’s hugely different. When we started it was just the two of us, we had a website and we were waiting for customers to find it. We were still wondering if there was a market there at all, so we started slowly. Today, we have so many referrals and repeat customers, plus we deal closely with Mardi Gras and we have a growing loyal following from around the world.

We even established a shopfront which gave us a real sense of being and a different branding. Establishing the shopfront was an essential point in developing the business. A lot of people do shop first, then a website, but we went the other way and that’s been fantastic for growing exposure online. Online lets us tap into an LGBT traveller market you wouldn’t expect, and the website has been a tool we’ve used a lot more than we thought we would.

What challenges have you come up against while running Planetdwellers?

One of our main challenges has been how fast to grow or not grow, [and] learning how much capital we need for what we’re doing. I’ve seen businesses start and want to build a brand immediately without doing any of the hard work. We’ve just taken it slow and steady.

Another challenge has been learning the market, as every client and country is different. It’s not one shoe fits all. Sometimes it’s hard to make sure everyone’s happy. Additionally, the Australian dollar rate has been an uncontrollable factor when dealing with international clients. When it went up to a $1.10 against the US dollar, we had to bunker down and be patient, and not expect a lot of clients.

It’s the freedom to do things the way you want to, and be constantly changing to do new things. We can try marketing plans or new tours, and if they don’t work we can just change them. We both love the constant change in the business and the lack of routine.

There are times when we could have grown quicker and just seen what the outcome was; we might have been too conservative sometimes. But that’s a hindsight thing looking back. We’re very comfortable now, but we could have taken more risks.

How has your industry changed over the past decade?

It’s changed dramatically.The most impressive thing about the travel industry is how it adapts to change really quickly — it knows it needs to and it knows it can’t sit on its laurels. As a business, you have to be prepared for change everywhere. If an airline changes or a tour changes, you’ve got to change too and just deal with what you’re presented.

One of the biggest changes was the rise of modern technology. People thought the internet would kill the travel agent but in fact, it’s helped us. People still use the net, but they’ll come to us for bigger bookings or if they need advice, and we’ll work with them on a trip and get it done together. We’ve found that clients don’t always want to do the work themselves.

What do you think are the three most significant factors or developments that will affect your business in the next 10 years?

For the growth of the business, it will be about how much we want to grow. The future plans we’re looking at are quite diverse and are vastly different to things we’ve done in the past. It will take a lot of work to grow the business, probably more work than we’ve done before. The challenge will be making those decisions without being too conservative and without taking too many risks.

Things are happening in the travel industry, especially with the rise of Airbnb. Initially, we were pretty down about Airbnb as we don’t make money on clients using that so it’s not good for business. Now we have the potential to be working with Airbnb on their new experiences offerings, and that’s really exciting. In the end, the opportunity they’re bringing us is better than the sales they took away. This is a huge opportunity that wasn’t around two years ago. So while it was depressing initially we waited for an opportunity and it has presented itself nicely.