Jason Daniel started his clothing business at the age of 16, and at the time he was driven by one thing – getting his own clothes to wear.

The business, Loose Kid Industries, is heading for a turnover of $5 million this financial year and is now stocked in over 350 retailers nationwide.

Not only does Daniel wear the clothes he sells, but thousands of others do too.

“The business started in 2007 and it originated from just as a phrase, ‘loose kid’. I was an apprentice carpenter, and I’d seen the success of other people’s businesses, so I began it mostly as something to do, just a bit of fun,” Daniel told SmartCompany.

Daniel finished his apprenticeship in 2010 and began working on the business full-time, which is currently growing at a rate of 15-30% every year.

Loose Kid Industries is what Daniel calls a “wheels, water, and lifestyle” clothing brand, selling men’s and women’s clothing, backpacks, caps and more. Despite selling for both genders, Daniel claims that the market is evolving towards more menswear.

“I think guys are becoming a lot more wary of what they wear and how they look. We’re seeing it now in the industry, more and more guys who want to look good,” Daniel says.

“I think we’re becoming more and more like women in that aspect.”

As a lifestyle brand, Loose Kid also evolved from Daniel’s’ passion for sports, growing up riding BMX, surfing, and competing in motocross events. Daniel admits he did “pretty much everything” that involved the outdoors and lifestyle sports.

“My whole vision was just about living your lifestyle, and that has translated into the company vision and how we’ve built our brand,” he says.

“One of the other reasons I started the business was that it could pay for me to go racing.”

A trademark from Mum

At the age of 16 and without easy access to Google, Daniel didn’t have of a concept of how to start a business. His mother bought him the trademark for his catchphrase “Loose Kid”, which helped get the business started.

“I was still quite young when we trademarked the name, my mum got all the paperwork to fill out and I still didn’t really have any idea how to do it,” Daniel says.

It was also Daniel’s mum’s credit card that started the business – a card that was often maxed out.

“Mum still has a big influence on the business to this day, she works for us handling the accounts and the backend side.”

In the early days, Daniel admits he had “no involvement” in the fashion industry, so building a fashion business from the ground up was a struggle. The early days involved many knockbacks and being told “no”, but Daniels said that just kept “fuelling my fire”.

“I just kept thinking how I could improve the company and the brand, and how we could keep it moving forward,” he says.

Today Daniel is not part of the design team, choosing to work instead in marketing and social media.

“I prefer to work to my strengths, rather than looking at what I’m not good at. Along with marketing, I’m the “out there” person that makes everything happen,” he says. 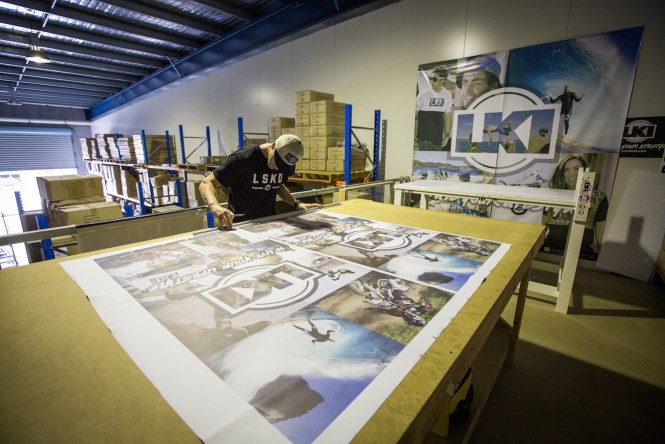 The importance of social media

Social media has been a big help for the brand, with nearly 250,000 followers across social channels. Daniel believes that his 15 young staff have helped the business to get on board with social media effectively.

“It’s been a huge help to work with our core fans and followers and social has turned into a big part of our strategy,” he says.

“We’ve got a young workforce which helps too. The oldest person in the office is 33, and the youngest is 20.”

The business also works with a number of influencers on their social platforms, including famous wakeboarders, base jumpers, and surfers. Loose Kid even snagged a deal with BMX Olympic athlete Bodi Turner, who promotes the brand.

“He even does some modelling for us too, he’s a jack of all trades really,” Daniel says.

Loose Kid is stocked in over 350 retailers in Australia and is undergoing expansion in New Zealand. Daniel says getting stock into that many retailers was “a lot of work”, involving pushing the brand down the right avenues and getting the right people on board.

“We had some sales agents early on that we found weren’t really communicating the vision of the brand, they weren’t really doing it justice,” he says.

“With so many other players in this market, and making a mark is really hard when you know you’re not on the same level they are. You have to tell a story, and we found that our agents weren’t doing that.”

Daniel chose to take his sales team in-house and has seen great success since.

Loose Kid exists both in-store and online, running both channels simultaneously to get the unique benefits that each one offers.

“We try to support bricks and mortar retailers because we know it’s a hard landscape out there. At the same time, our e-commerce offering is really booming,” Daniel says.

“You’re never going to find a retailer that will stock and showcase your entire range, so that’s what e-commerce is so good for. It’s also really helped us grow overseas in places we don’t have retailers.”

Bricks and mortar are still a main player for Loose Kid, with Daniel revealing the business will be opening their own store soon.

Apart from that, Daniels says the focus is on “growing organically”, and the business has already picked up stockists in the UK and Taiwan.

“Our main focus right now though is definitely Australia and New Zealand.”

For other entrepreneurs, Daniel has some practical advice.

“Remember you don’t know everything. And stay lean when you’re starting up, things will come at you that you don’t expect,” he says.

“You’re always going to face problems, so it’s important to roll with the punches and go out and get it.”