These female entrepreneurs are rethinking fashion and saving 94,300 plastic bottles from landfill

It was World Environment Day on Tuesday, June 5, and there are countless examples of innovative female entrepreneurs doing their bit to find new ways of addressing environmental challenges.

That’s especially true in the fashion industry, where solutions are desperately needed given the consumer shift to fast fashion, with the global fashion industry now being the second biggest polluter in the world.

One such example I wanted to highlight comes from Nimble Activewear, a Sydney-based clothing company founded by two childhood friends, Katia Santilli and Vera Yan, which now turns over $4 million annually.

The duo’s core range COMPRESSLITE is created with fabric made from post-consumer use recycled plastic bottles. Each pair of leggings uses four such plastic bottles, while every sports bra incorporates one. 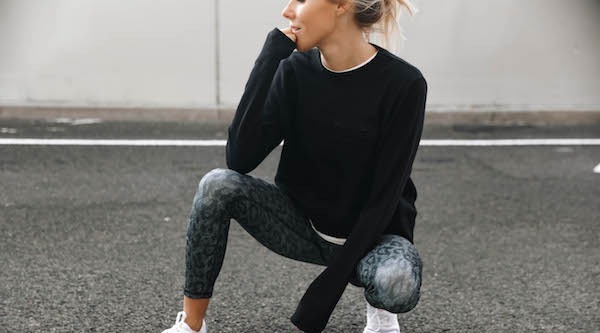 The brand says the range has already saved 94,300 plastic bottles from going into landfill this year alone.

They add that their manufacturing process is more efficient than traditional manufacturing methods, with the bottles melted down into chips then turned into yarn and knitted with spandex in order to create its core compression fabric.

It also helps that they have a short supply chain, where the raw product to finished garment being just 80 kilometres where they’re made in Taiwan — Santilli and Yan also assure me that they’re advocates for fair working conditions and pay.

Mass production of plastics only began six decades ago, and yet in that time we’ve already created more than 8 billion tonnes, according to new research out of the US this week.

That figure is expected to see 12 billion tonnes of such waste in landfills by 2050.

Much of that plastic sits alongside clothing, given cheap clothing and an increased penchant for throwing garments away over repairing or holding on to them means it’s ending up in the ground.

Now for major clothing retailers to follow the lead.

The new race between Coles and Woolworths proves how quickly things can change when it comes to addressing waste and sustainability, as well as how powerful a consumer push can be.

Both Coles and Woolworths have committed to ending the free single-use plastic bags within days of each other. And this week both have launched major advertising campaigns aiming to push their sustainability commitments.

Coles has committed to halving its food waste in the next two years, and shifting 90% of such waste away from landfill by 2022.

Woolworths has promised to stop selling plastic straws by the end of the year, and to significantly reduce plastic packaging around fruit and vegetables.

Both of these supermarket chains are responding to consumer demands, as well as competition with each other.

Step up the pressure, every bit helps.

And in the meantime, look for great sustainable shopping ideas from female entrepreneurs.

NOW READ: Woolworths and Coles make a clean break on plastic bags: Will the so-called ‘war on waste’ apply to SMEs?