It’s footy finals time again, and we’re taking a look at some of the footy players — past and present — striking out to launch small businesses and startups.

Who did we miss? Let us know in the comments.

James Begley, co-founder of corporate talent booking platform PickStar once described himself as a “mid-range washed up hack footballer”. But he did have a six-year AFL career, playing for St Kilda and the Adelaide Crows, before retiring due to injuries.

His co-founder Matthew Pavlich is a legend of the Fremantle Football Club, and has also served as president of the AFL Players’ Association.

Now, the pair have hung up their boots and are focusing on their startup venture — a platform making it easier for players to book paid corporate bookings and other appearances.

After securing $1 million in funding back in 2018, PickStar has only been on the up.

In April, the founders worked with the Australian Institute for Machine Learning (AIML) to incorporate AI into their tech, improving the matchmaking process between customers and celebs.

“The work that the AIML does allows us as a Pickstar platform to serve up and recommend the best available talent for someone’s brief and budget,” Begley said at the time.

“That can only happen with heavy investment into machine learning and data analytics to underpin the recommendation engine.”

Before being drafted to the Western Bulldogs in 2016, Lauren Spark was busy championing the game overseas, based in London.

Having seen the potential to get more women involved with AFL on a global scale, she launched CrossCoders in 2018, a talent agency and sports education program aimed at bringing athletes up to a professional level.

While playing herself, Spark also acts as a mentor for new players coming from overseas to join the AFLW league.

“That’s been my whole role in all of this,” she said in an interview with AFL Players.

“I know what it’s like and I can speak about the competition and the standards and expectations of what it’s all about,” she added.

“We’re going to keep campaigning and crusading to get more girls over from whichever sport and whichever country that may be to bring those elite behaviours from their own sports to the AFLW.”

Brad Moran, who played for Hawthorn, and the Adelaide Crows, retired in 2011, and has since founded two tech startups, NoQ and CitrusAd.

The latter, founded in 2017, is a Software-as-a-Service platform designed to help brands boost their marketing on e-commerce sites. In July 2021, the business was acquired by French advertising giant Publicis Group for an unknown sum.

According to an article from Business News Australia, when it was sold the business had more than 70 clients, while 4,000 brands used its self-service platform.

“We want to build this into a beast of a business, and we needed some extra muscle to do it,” Moran reportedly said of the acquisition.

“The industry itself has really ramped up over the past five years, especially the past year during COVID,” he added.

“Because of the growth trajectory the business was on, all the retailers we were launching and the brands that were using us, our brand presence started to spread very quickly around the world.”

Former Hawthorn star Joel Smith retired in 2007 after a 13-year career. In 2015, he launched real estate startup Gavl, which live-streams property auctions to allow participation from prospective buyers across the world.

Alongside co-founders Leith Donalson and Michael Artup, Smith secured $1.8 million in funding back in 2017. Since then, it’s evolved to offer electronic deposits and contract signing, and has even appeared on home refurbishment show The Block several years running.

During the COVID-19 pandemic, the business has also been able to livestream property inspections, and has partnered with Realestate.com.au, allowing Gavl customers to promote their auctions directly on the listing site.

“In light of recent restrictions imposed on the industry to curtail the spread of coronavirus, never have digital platforms like realestate.com.au and Gavl been more important,” Smith said in a statement at the time.

After two seasons at Collingwood and one at North Melbourne, former AFLW player Moana Hope has since made multiple TV appearances, published her autobiography and become an in-demand public speaker.

Between all of that, she also runs her own traffic control business, Utilities Traffic Management.

As of 2018, the business had about 80 employees. Speaking in an interview around that time, Hope noted that when she started working in traffic management, she was the only woman in the office.

“There were some people that didn’t like me, but that just encouraged me to know more,” she said.

“We’re the only traffic management company in Victoria that’s run by females – and were doing a pretty good job.”

Fergus Watts’ AFL career lasted just two years, during which time he played for Adelaide and St Kilda. And, while in an Exclusive Insight blog he describe his career as a failure, he also says it was “the best thing that ever happened to me”.

Watts went on to found marketing and communications agency Bastion Collective when he was just 23.

Today, the business has more than 250 employees across offices in Melbourne, Sydney, LA, Newport Beach and New York.

Speaking to SmartCompany back in 2016, Watts said his sporting background prepared him for failure in business.

“Failing becomes an easier proposition after that because you’ve done it in a reasonably public platform,” he said.

“Failure is okay and it does happen time and time again. But it’s about being able to adapt from that and keep moving forward.”

Former Essendon Bomber Andrew Welsh retired in  2011, and has since made his way onto the Australian Financial Review’s Young Rich List, with a personal fortune of about $136 million at last count.

Welsh heads up property development company Wel. Co, which rebranded from Welsh Group in 2020 following a corporate restructure. As of November 2020, the business was overseeing a property development pipeline worth some $1.5 billion, including residential developments on the outskirts of Melbourne.

Back in 2010, former AFL player Nick Stone relocated to New York City to take on a very different challenge — standing out in the Big Apple’s cafe scene.

He opened the first Bluestone Lane cafe in 2013, and now has more than 50 spread across the city.

The idea was to bring a little bit of Melbourne’s cafe culture to the US, bringing premium espresso, seasonal foods and boosting the presence of independent venues.

In an interview on LinkedIn, published late last year, Stone said the COVID-19 pandemic has been “heartbreaking”.

“It has been the hardest year that I ever had professionally,” he said.

However, through pivoting and investing in technology, he sees growth ahead.

“I think we are seeing an accelerated future state.”

Finally, Melbourne star Max Gawn teamed up with his brother Todd Gawn to launch The Bearded Jaffle, a food truck-turned cafe and kitchen garden now based in Ascot Vale, Melbourne.

During on of Melbourne’s lockdowns earlier this year, the business offered up free lunches to hospitality workers who found themselves stood down without pay, and without government support. After a callout on social media, it saw donations starting to flood in from the community, allowing the business to dish out hundreds of free meals.

“I actually can’t comprehend that there are half a million casuals in Victoria that have just basically been told to starve,” Todd Gawn told SmartCompany at the time.

“They live week-to-week as it is,” he added. 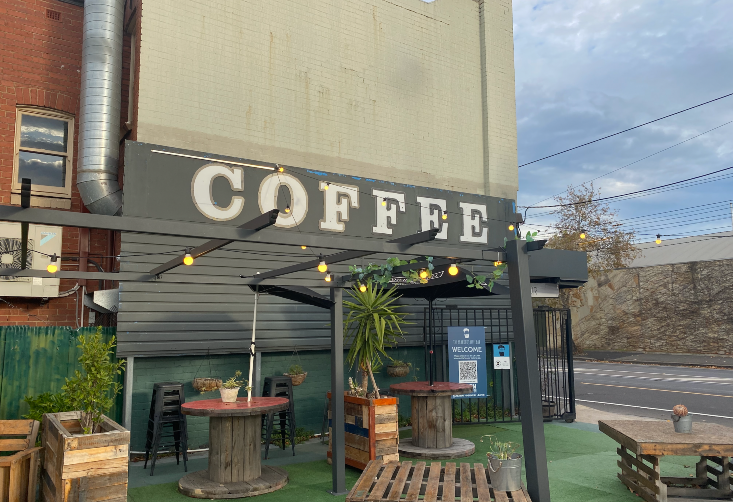 ‘Invisible attributes’: You can’t tell diversity from only a photograph

If you look at the photo that goes with this article, you might not think you're looking at a diverse group of women. But you are.

“Family is a big part of how we operate”: Stagekings celebrates National Family Business Day

Like many family-run businesses around the country, Stagekings is taking part in National Family Business Day today with a celebratory Zoom gathering this afternoon.