Why Georgia Samuel decided to close her once thriving salad bar chain, Famish’d

Georgia Samuel says calling her store managers to tell them the news was the hardest part of deciding to permanently close the salad bar business she founded 11 years ago.

The corporate lawyer turned business owner is the founder of Famish’d, a chain of four salad bars in Melbourne that attracted a fiercely loyal customer base since its beginning in mid-2010.

The former Freehills lawyer launched the business during the global financial crisis, but Samuel’s leap of faith paid off as she quickly expanded from one venue on Little Collins Street to another three in Melbourne’s CBD, at one point employing 62 people.

Like many city eateries, the Famish’d stores were hit hard as the COVID-19 pandemic took hold and the thousands of office workers were suddenly all working from home.

The Famish’d stores were temporarily closed March 24, 2020, as Samuel watched as daily sales dwindled to just $100 a day in one location. Many of the business’ employees were made redundant, with those kept on supported by JobKeeper and the mandatory rental code that allowed the business to continue.

“Even then, we were in denial,” Samuel tells SmartCompany.

“We were in there clearing out stock and calling Oz Harvest to pick up food. We were looking at the shelf life of some of the products; Emma & Tom’s juices had a date of the 27th of May, a decent shelf life, so we left them in the fridge thinking we would be back by then.

“But obviously no one was back, and I had to go in to clear out more stock.”

Samuel says she was always aware that government support would not be long term, and had every intention of reopening the venues after September 30. But, when restrictions were lifted and workers did not immediately return to the CBD, she knew it was time to make a call.

It was clear CBD customer levels would not return to 100% for some time, and in the situation, the business would continue “haemorrhaging” money, she says.

Customers line up at the first Famish’d store. Source: supplied.

The ‘hardest’ calls to make

Calling her senior managers to tell them her decision was highly emotional, says Samuel, who still considers many of her team to be as close as family. Some had worked for her for the entire 11 years Famish’d operated.

“It was their livelihood; it was the hardest part of the decision and the hardest conversations,” she says, recalling the emotional conversation she had with one long-term employee who her children know affectionately as “Aunty Lozzy”.

Samuel credits the low turnover among her staff in part to her willingness to set an example by “getting her hands dirty” washing dishes, clearing tables and serving customers.

In fact, having come from a corporate background with little experience in hospitality, Samuel says the biggest lesson she learnt during her time growing Famish’d was how to be an employer. Her approach has always been to treat her staff as “equals”.

“Particularly in hospitality, there are a lot of business owners who don’t realise that; who don’t treat staff well, who treat them almost like slaves. But if people love their work, they love coming to work, and they love selling the product and the people they work with, they will sell your product better.”

“If the community can come together in a time of crisis, I think that will continue,” she says. 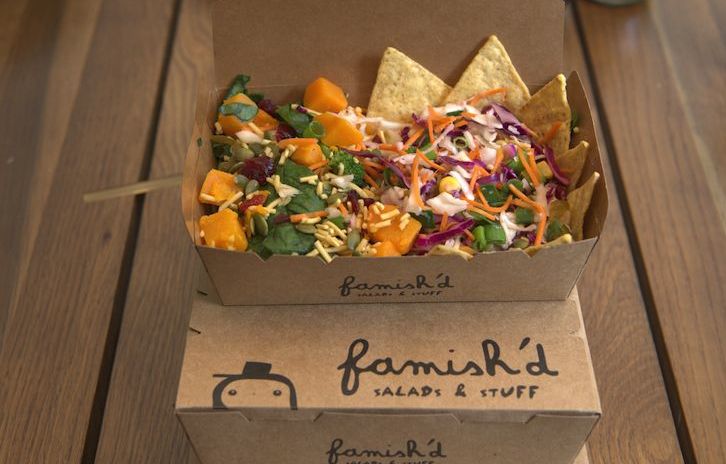 Samuel is candid about how the pandemic affected her mental health — “my business was decimated overnight” — but as she now considers the next phase of her career, she says she’s excited to think about potentially starting another business one day.

“I want to make sure the next move is the right one,” she says.

“I know I have a lot of value to add to other businesses, but I have some great ideas myself too. I’ve learnt a huge amount during the past 11 years, particularly last year.”

Despite the immense challenges of 2020, she says there’s nothing quite like “watching your dream come to life” by growing a business, and that she misses the “camaraderie” that came with working in the Famish’d stores each day.

“I never thought of myself as an entrepreneur, it’s only in the last few weeks that I’ve really been missing it. I realised I am actually an entrepreneur; I’m a business-minded person.”

“Once you’ve got that, it’s not something you can lose.”

How do you know when inspiration has turned into distraction, and what should you do about it?

High stakes: Melbourne’s CBD eateries are ‘starting from scratch’ as office workers return to the city

Cafes and eateries in the heart of the Melbourne CBD are eagerly awaiting the return of more office workers to the city, and with it the promise of much-needed sales and stability.