Have a Hamdog: Why a business that scored a $2 deal on Shark Tank now has the world’s attention

Have you ever been torn between a hamburger and a hotdog? Have you ever wished you could combine the two into a futuristic looking hybrid?

If you answered yes to either of those questions, Perth based businessman Mark Murray has answered your prayers by developing the “Hamdog”. 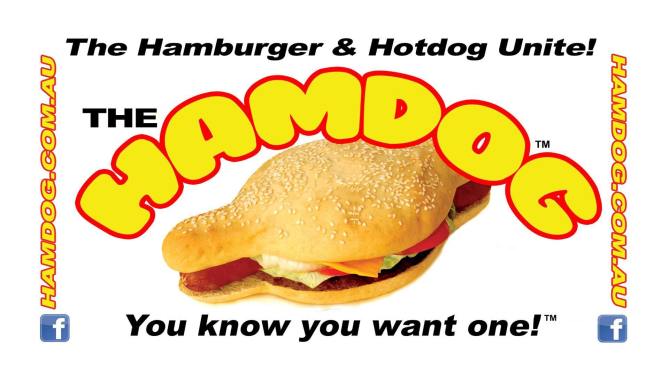 The Hamdog looks mostly like a typical hamburger, with small bread extensions on the side to facilitate the placement of a hotdog down the middle. Murray has patented the product in Australia and the US, telling SmartCompany it is the “first food product with this kind of protection” on the planet.

The 51-year-old entrepreneur has started and owned upwards of 30 businesses in his lifetime, with his most recent being an auctioneering business. He is currently in the process of selling it, however, as the attention he’s received for the Hamdog has been massive.

“It’s gone truly viral, I did an interview for Good Morning America last night, and I think it’s been on every media company out there,” Murray says.

Like all good ideas, Murray came up with the Hamdog after a night out at a pub in Nashville, Tennessee. Before calling his ride home, Murray decided to purchase both a hamburger and a hotdog.

“I was in the passenger seat munching away on the burger and I decided to start on the hotdog at the same time. Shit was going everywhere,” Murray says.

“I said to my partner at the time ‘Wouldn’t it be easier if they joined these bloody things together?’ I think I then passed out, but the idea stuck with me.”

The next day Murray began sketching up the initial concept of the Hamdog bun. Over the next two years, he put together a patent application, despite being told attempting to patent the concept was “impossible”.

Murray underwent the patenting process himself in order to save money on legal fees, despite being told without help he had “more chance winning an Olympic medal”.

Since then, Murray has been trying to get funding for the business, appearing on the first episode of the first season of Shark Tank, where he admits he was “kicked around a fair bit”.

Murray offered a 25% stake in the Hamdog business for an investment of $1, claiming he had no interest in building the business and was simply “wanting to get rid of the concept”.

Shark Andrew Banks took Murray up on his offer, doubling both the investment and stake to take 50% for $2. Banks liked the concept as a novelty but told Murray “there’s no business there”.

Banks tried to pitch the Hamdog in the US market, but hit a brick wall. “He was trying to pitch a product that doesn’t exist, they couldn’t get their heads around it,” Murray says.

Realising the US market wasn’t ready for the Hamdog, Murray set his sites locally and launched the product three months ago at Edith Cowan University in Perth, Western Australia.

The Hamdog has mostly been sold at events, such as sporting matches or community markets, and Murray says the hybrid is “definitely going to be event food”.

“When you’re out and about at those sort of shows, you’re doing something different so the Hamdog fits right in,” he says.

“We live in a pretty serious world, so it’s good to see people interacting with a food that’s a bit of fun.”

Murray says the Hamdog’s future rests on his ability to franchise the business; he’s offering other operators the potential to become an official “Hamdog Reseller” for $10,000. Since the attention to the product, Murray says he has thousands of emails interested in Hamdog reselling.

“Everything was rolling along nicely until the bomb dropped, now I’ve got people from Dubai asking if they could sell them,” he says.

“The whole planet is interested which is great, but it would have been nice to be a little prepared.”

Banks and Murray are now working on the best way to progress with the business, but Murray says he is hoping to take another shot at cracking the US market.

We examine how Anna Ross of Kester Black has harnessed Instagram to grow a global audience, unpacking her influencer, content and campaign strategies.