Sean Garlick started Garlo’s Pies with his family in 2000, when his brother Nathan was inspired the family to open their own pie shop. These days, 46-year-old Garlick still runs the business, which turns over $15 million annually.

The company sells pies all around the world, from the Middle East to the US. Recently, Garlo’s Pies signed on to trial their pies in 23 McDonalds stores across the Australian Capital Territory and New South Wales.

SmartCompany spoke to Garlick about turning a hobby into a “big family business” and how both rugby and acting gave him skills for running the business.

I was the initial founder of the business. Before that I was a rugby league football player for the Rabbitohs and the Roosters in New South Wales. I retired at the end of the 1999 season.

At the same time my father was retiring, having been a diesel mechanic on the waterfront for 40 years. I was looking for a hobby and so was he.

My brother, Nathan, was a pastry cook who was growing tired of working for wages in a local pie shop. He came up with the idea of opening our own pie shop, giving him a fulltime job and me and my dad a part-time interest

It exceeded all of our expectations and it turned into a big family business. We opened our second store a year after the first one, and we hit 13 stores after five years in operations. Our stores were both company-owned and franchised. We also started doing wholesale distribution.

These days, Garlo’s Pies is based in St Peters in the southern Sydney district. Three years ago we moved from a smaller bakery about 1km away that we had been at since 2004 and we’re just about to move into a new place in Kingsgrove.

To fund the business we just scraped together what we had, and we continued to fund ourselves along the way. We funded a lot of the earlier stores from profit.

My brother had to be talked into it; he knew how to make the product but had no idea how to run a business.

That was the same for all of us. Not only had we never run a business before, we didn’t even know anybody who had run their own business.

We had to make it up as we went along.

You make many mistakes and those mistakes invariably cost you money. The ones that cost you the most money are the ones you learn the most from.

The biggest mistake we made starting out was setting off on the pie shop and franchise model quite aggressively.

Our first pie stores were our most profitable, and always were. Because of that we became a bit cocky and just thought it was easy.

The next five stores cost us money and we were lucky the good ones were outperforming the bad ones. We found the more stores we opened, you didn’t really get any economy of scale.

We realised the only part of the business that was making good money was the central bakery making the pies. The more we made, the cheaper we got the pies, and the bigger our scope for buying ingredients.

Making the pies was becoming easier while running stores that sold them was becoming harder, so we ramped up our wholesale distribution

Every business’s greatest challenge is getting good people and retaining those people. That was another difficulty for us in the early days – and even now. Trying to get good staff in our businesses, which were scattered all over Sydney was a difficult process.

One of my greatest focuses at the moment is how we can make ourselves an employer of choice and get people to stay.

I quickly realised football people and pie people were pretty much the same. I’m not selling fancy IT equipment; I’m selling something everyone I knew could relate to.

When I finished with football I was still involved in the media, and was doing some commentary for The Footy Show.

That was an opportunity not a lot of businesses get. Rather than having to build my business for months and years, we launched and were at full capacity from day one. 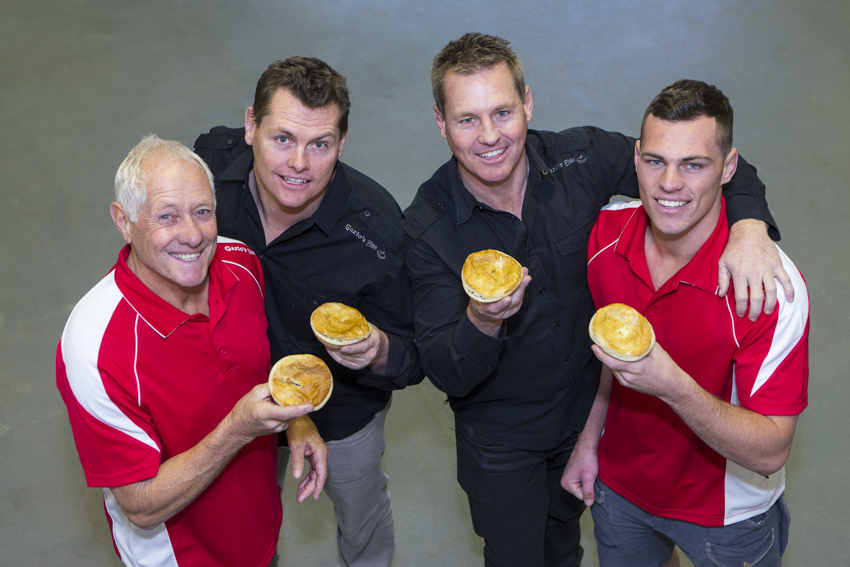 I was a child actor from the ages of 10 to 20. I appeared in commercials and TV series, and I even starred in a movie with Rachael Ward called Fortress. That was a great confidence booster for me as a 15-year-old.

My experiences as an actor gave me confidence to do things that I’m not always particularly familiar with, like starting this business.

In 2009 we started dealing with Coles, who are renowned tough negotiators.

I told them to keep it simple because we were a small family business and we’d heard the horror stories about being involved with the supermarket duopoly. Coles, to their credit, were very good at admitting they need to be better at dealing with small suppliers. Together we worked on what we needed to do in terms of food safety, compliance, distribution and supply on a big scale.

We recently signed on for a six-month product trial with McDonalds in 23 of their New South Wales and Canberra stores. It’s going great guns.

We spent 12 months working with them to perfect the product they wanted. The end product is the same recipe as other pies, but has a completely cooked filling and a raw pastry so they can bake them fresh in store.

Getting this deal was a sheer fluke.

I was on my first business class flight ever after coming back from Los Angeles and I sat down next to a guy who recognised me from my football days. He happened to be the state manager for NSW and ACT McDonalds.

We spoke for 14 hours and had a few beers, and spoke about the idea for pies in McDonalds.

An easy way for us to grow is to provide more products to our existing customer base. We’re starting to expand our range, adding things to our range like banana bread and muffins.

We’ve just developed an array of pie flavours, including Alaskan king crab, Moroccan vegetable, lamb and rosemary, chicken and chorizo, and Peking duck. These are flavours you wouldn’t normally expect in a pie. Keeping it interesting is a great challenge in Australia.

The current industry situation is almost identical to the beer industry; craft beers have become a craze in Australia now and it’s very much the same for pies.

But once you get outside these shores, the pie is still relatively unknown. Our buyers in the US are still happy to go for the old-fashioned, plain mincemeat pie

We’ve expanded to the US with two stores in Los Angeles. One is right on the doorstep of UCLA College, the other on Hollywood Boulevard.

We’re called Garlo’s Aussie Pie Shop in the US. It’s a completely new concept to them and we’re given a helping hand from expats and visitors.

Where we are in LA is very close to the film studios, and every second director, cameraman or wardrobe person is an Aussie. They’ve been a great way of introducing our pies to the American people who have no real concept of them at all.

We also distribute all over NZ, and some parts of the Middle East, Asia and the South Pacific. We’ve been exporting now for about two years

The barriers for exporting beef out of Australia are so massive because we’ve got the best beef reputation in the world. The hoops they make you jump through to gain export accreditation are quite tiresome.

Once you get out of Australia the opportunities are endless and you realise what a small place Australia really is.

We didn’t want to fly to the moon straight away. We realised what we’re capable of.

At the same time, we’re not afraid to bite off more than we can chew, and chew like hell.

Businesses should be careful on the speed of their growth; it’s best not to over extend yourself.

We’ve been governed on what we been could afford along the way. I think that’s been a bit of a salary cap for ourselves to keep us in order.

It’s best not to have static business plans. We like to look at ourselves as being fairly agile and quick to react, which is ideal.

You have to get the right people on the bus, because then the bus will drive itself.