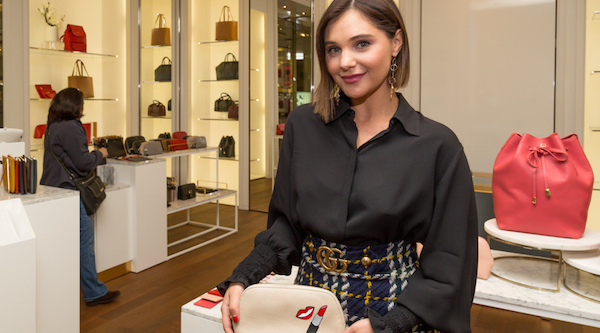 The growth of Lana Hopkins’ company Mon Purse, and her rise as a global entrepreneur, is stunning.

In late 2014, she founded the fully customisable handbags and leather accessories brand, after being inspired by a build-your-bear workshop.

She found a unique place in an otherwise crowded accessories market, by offering monogramming and on-site painting to create bespoke designs.

The brand’s now available online, in Myers, Selfridge’s and Bloomingdales — and has been worn by a line-up of celebrities.

Hopkins’ latest milestone is the opening of the brand’s first standalone store in the United States, replacing DIOR in a New Jersey shopping mall (DIOR’s relocating, not being pushed out, I’m told).

Speaking about the US expansion, Hopkins told me the centre approached her while she was in the US earlier this year. They were impressed by the Bloomingdales concept, as well as the online store, and were keen to get a millennial brand in the mall.

She said she’s always had global ambitions for the brand, believing such plans are essential for a successful business.

“I always wanted the brand to stand up on an international scale whilst still supporting the continued growth in the Australian market,” she said.

“Our launch with Bloomingdales received such a great reaction and exceeded our expectations so it made sense to launch our first global stand alone store in the US.”

Hopkins says the brand will continued to focus on global growth, with a number of additional stores opening over the next financial year. This month, Mon Purse will open in Bondi Westfield.

She’s also working on a range of brand collaborations, along with an artificial intelligence platform.

Hopkins worked in advertising across a number of major magazines before moving to mcm Entertainment as a business manager, and then later to iCoverLover, a brand making stylish smart phone and tablet cases.

She launched the Mon Purse website from her kitchen bench in 2015 after raising a small amount of startup capital, before moving into a crammed office above their Paddington store, with nine staff, and four desks, in 2015.

The unique selling point for the business is its technology, which enables customers to see 3D versions of the accessories they design on screen — offering 10 million design options in the process. Earlier this year, the business was valued at $30 million — it did $2 million in sales in December 2016 alone.

Asked what her working days now look like in 2017, Hopkins says it involves analysing sales number and the performance of their physical stores, reading a bunch of publications covering business, tech and politics, meeting with various business departments covering tech and design and user experience, marketing, digital and brand.

She also spends much of her working day with data, looking at how the retail operations are performing, examining feedback coming through from customers online, and exploring what’s going on in the supply chain.