What Tom Szaky has learnt from turning worm poo into TerraCycle, an $18 million recycling company 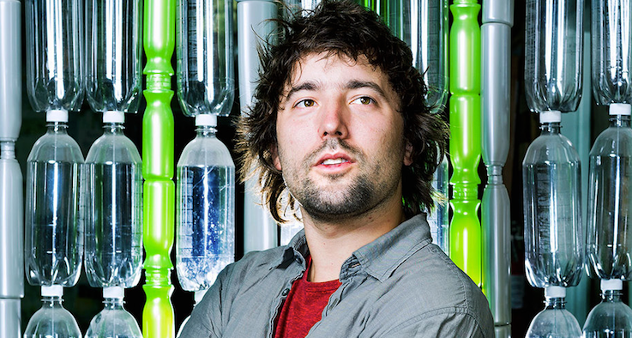 Tom Szaky’s company TerraCycle may be turning over millions of dollars a year, but cash is not the only thing the business is turning over. It also turns over waste – from coffee capsules to dirty diapers.

Szaky founded TerraCycle in 2001, inspired by the effects worm poo had on his university hydroponics project. He quickly saw a market opportunity, and began to create and sell worm poo fertiliser, labelling it as “plant food”.

These days, TerraCycle aims to recycle and re-purpose the non-recyclable, from cigarette butts to juice packets. The company has recycling agreements with thousands of brands around the world and recorded revenue of $18.8 million in 2015.

In 15 years, the company has recycled more than 3 billion pieces of waste. But Szaky says this still isn’t enough, as a human today consumes 10 times more “stuff” today than a counterpart living 100 years ago.

Speaking at Wildwon’s Purpose conference last Wednesday, Szaky said “the best thing about using waste is that people pay you to take it”.

“It has a negative raw material cost,” he says.

Three things to learn about waste

In the early days of TerraCycle, Szaky packaged his plant food in recycled Coke and Pepsi bottles, saving costs and increasing the volume of waste being recycling.

“If we make the product out of waste, why don’t we go back to garbage as the answer? So our first product was waste, packaged in waste,” Szaky said.

Through this experience, Szaky says he learnt three very important things about waste.

“Firstly, waste is ridiculously standardised, because in all soda bottles, the height, bases, and even the treads are the same. This allowed us to run mixed uses bottles through a high speed bottling machine,” he said.

“The second thing we learnt is that it’s illegal to go through people’s garbage. We spend a night in jail reflecting on that one.”

“The third thing we learnt is that garbage has intellectual property. Pepsi still owns the shape of their bottle, and even though we were packaging something else in it, we were still infringing on their copyright.”

Other companies may have given up, and started to create their own packaging, but Szaky was determined to reuse as much packaging as he could.

“One of the greatest things about purposeful businesses is the ability to influence corporations. When we showed [Coke and Pepsi] our facilities and what we were doing, in 30 days we got the world’s first and only licence to package shit in their soda bottles.”

Understand the purpose of your client

TerraCycle works with many different clients to help them recycle parts of their products. He says that one of the key ways he’s achieved growth with TerraCycle is understanding the purpose of these clients

“One of our key issues was how to get these large organisations to integrate us into their product? We realised the way to do this is to understand their purpose,” Szaky said.

Szaky’s vision of reducing waste worldwide was not going to get very far without the cooperation of larger corporations. However, he didn’t hope to change their views, or try and guilt them into working with TerraCycle

Working with brands like L’Oreal and Colgate, TerraCycle created promotionally focused projects, such as gardens made from makeup waste, or playgrounds built from old toothpaste packets.

“Over time we accumulated these small incremental wins over six month periods, which is easier for organisations to look towards compared to 10-year long plans,” he said.

“We just had to focus on the clients purposes.”

Do what you’re good at

Szaky has dealt with many different companies and organisations over TerraCycle’s years of operation, but he believes he has managed to keep the business’s focus where it should be.

For Szaky, businesses should only focus on what they are “really good at”.

“We helped them replace the sole of the shoe with wine corks, and 30 per cent of the leather with coffee bags.”

Szaky believes that trying to do everything for all your clients can spread your business too thin, and you’ll never be a real expert at anything.

“When we announced our Australian cosmetic recycling program, a journalist asked me how we we’re going to deal with the concept. If we focused on the concept too, we wouldn’t be that good at anything, so we just focus on the waste,” he said.

“We decided we were going to be an expert in one thing – and that thing is solving waste.”

Szaky has one key piece of advice for purposeful businesses everywhere.

“If you scare people, like the world’s going to end, with all these negatives, you’re going to create no engagement,” he said.

“People will feel like nothing they do truly means anything.

“When you do it through delight and make people happy, then they will feel awesome, and they’ll want to make those incremental steps.

“This can be applied to anything, not just garbage. Whatever you work on, try and get people to smile and enjoy interacting,” he adds.