Ahead of the times: How Adam and Deborah Drexler built Matt Blatt into a $43 million furniture and homewares empire 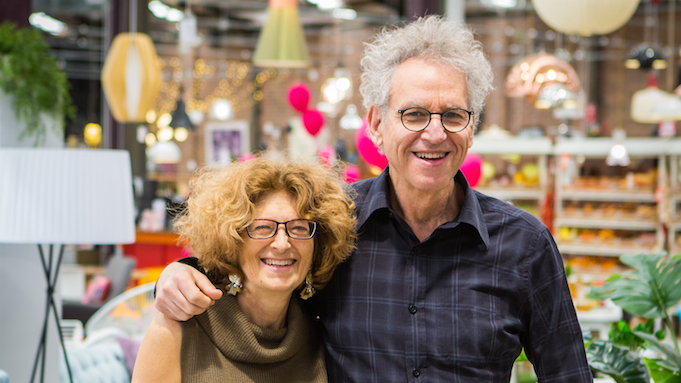 For many Australian shoppers, the name Matt Blatt conjures up images of colourful and contemporary furniture and homewares.

But there was a time when the name that now belongs to Adam and Deborah Drexler’s multimillion-dollar retail brand was just two words on the side of a bunch of incorrectly labelled boxes.

The boxes, filled with products, were supposed to be labelled with the colour ‘matt black’, recalls Deborah, but whoever had labelled the boxes made a fortuitous typo.

At the time, Deborah and Adam’s furniture business had a location and plenty of customers, but no name. Making sure their customers could find them was becoming a problem, says Deborah, and the words on the box seemed as good a choice as any for a unique business name.

“Our business name is a typo,” laughs Adam.

The Drexlers are not the first business owners to be inspired by a typo when naming their business; Australian fashion brand Mister Zimi found its name from an incorrectly addressed parcel, and many people will be familiar with the typo that gave birth to Google. But the story highlights Deborah and Adam’s approach to business: they’re willing to experiment and take a risk, and they do so as a team.

It’s an approach that has seemingly kept them on the path to success. Today, Matt Blatt operates 13 showrooms in New South Wales, Victoria, South Australia, Queensland and the Australian Capital Territory, and a thriving online store. The business employs more than 200 people and has annual revenue of approximately $43 million.

The early seeds of the Matt Blatt business were planted in 1981 when Adam started his own furniture making business, specialising in what he calls “generic” kitchen chairs.

“I was manufacturing and doing reasonably well, selling to retailers around the country, including the big ones,” Adam tells SmartCompany.

But as the Australian economy opened up more to overseas imports in the 1980s, particularly from China, Adam found it increasingly difficult to “compete with the products and prices made available” from offshore suppliers.

“Slowly, each of my retailers starting ordering offshore,” he recalls.

By the late-1990s and early-2000s, it became clear to Adam and Deborah they “couldn’t survive in the manufacturing environment in Australia” and they needed to act.

They did so, and quickly.

“We auctioned off all our machinery and everything in our manufacturing plant and made the switch overnight to importing,” says Adam.

“It was so scary for many different reasons.”

Making the switch from manufacturing to importing fundamentally changed the Drexlers’ business, especially when it came to managing cash flow.

“When we were manufacturing, we were buying raw material in Australia on credit,” Adam explains.

“But when we began importing, we had to pay for stock three months ahead before we’d sold anything.”

An eye on the future

While Adam says the importing business “kind of took off instantly”, the competition in the space was fierce and margins were under pressure.

“Retail stores would buy from us if we reached a certain price point,” Adam explains, “but at that price point, there was no margin, no profit in the products”.

It was the early 2000s and the Drexlers were looking for another way to generate sales. EBay had arrived in Australia two years earlier and their business became the first furniture company in Australia to sell via eBay.

“We felt this is where the future was going,” says Adam.

“And we could see instant results; you put a product up and someone would buy it an hour later. It worked very well.”

The next step was to build their own website, which would give them “more control over what we sold”.

“There was also less visibility of what was sold … [with eBay], our competitors could see what we were selling and jump on the bandwagon,” says Deborah.

Importantly, this is when their business truly started to transition from being a business-to-business furniture seller to a consumer-facing retail company.

“The important thing for us was at this time, we weren’t buying stock we thought retailers could sell, we were buying what we thought we could sell to the public,” says Adam.

It’s also when the business expanded its range of products to embrace modern, contemporary furniture designs.

“Our pieces give a lot of pleasure and enjoyment,” says Deborah.

“They’re comfy, beautiful, they provoke a sense of joy; we’ve felt that when we’ve taken different pieces home to our house — they’re pieces you want to keep forever.”

As the Matt Blatt website explains, the Drexlers don’t seem themselves “in the furniture business”, but rather “in the entertainment business”.

So when they picture their customers, who do they see?

“They get us, they love furniture, they’re quite courageous, happy, they have a sense of fun,” says Deborah.

“They understand quality and design and value for money.”

Experimenting with selling online via eBay paid off for the business — “business just picked up and grew and grew”, says Adam — but the sales method wasn’t without its challenges.

“There are limitations with selling just online in the furniture business, especially then, but today that holds as well,” he says.

“Around the 2000s, online sales weren’t very well developed or sophisticated”. Shoppers were scared about using credit cards online and worried they might not get their goods, plus the type of e-commerce security measures we have in place today weren’t common.

The answer to this, for the Drexlers at least, was to open a physical showroom in Sydney. The first Matt Blatt showroom opened in Marrickville in 2001.

“We tried opening up a showroom, and we found that when we did open the first one, sales increased dramatically,” says Adam.

They found customers who’d seen their products online would then come into the showroom to ask for advice or to check out different colours.

“We thought we were on to a good thing,” he adds.

Over the past eight years, the business has progressively opened up a series of feature and boutique showrooms in Sydney and interstate, with the flagship showroom located in Alexandria in Sydney.

Adam and Deborah say they’re “pretty happy” with the current number of showrooms in the Matt Blatt network, although they would like to open one in Perth. That would require “a lot of thinking about how to go about that, given it’s so far away”, says Adam. To make it work, the business would likely need to open a warehouse in Western Australia too.

A move into New Zealand is higher up their wish-list.

“We would consider going into New Zealand first with an online presence and not necessarily a showroom, [and] we’d ship orders on a weekly basis from Sydney to Auckland,” says Adam.

“That’s on the table right now”.

Meanwhile, the retailer’s growth is still coming from its online sales.

“What is really excelling for us is our online business,” says Adam. “It’s growing at a much more rapid rate, but we know some customers come into the stores and then buy online”.

Matt Blatt no longer sells furniture and homewares through eBay, but the business does have a presence on Amazon.

“It’s pretty good; it’s not our biggest source of sales but it’s growing,” says Adam. “It gets our name out there.”

That kind of branding is likely more important than ever before, as the furniture and homewares space in Australia continues to intensify. Over the past five years in particular there’s been an explosion of retailers playing in this space.

“The furniture market is getting to be a very crowded market in Australia, with places like discount department stores selling homewares and Ikea growing and growing,” says Adam.

“And every time a new entrant arrives, for sure they’re taking market share away from existing players there already.

“For one to survive, you have to find better ways of marketing, product selection, better service … just smarter and better.

“We’ve had visitors from overseas not understand how a small country with a population of 25 million can have so many furniture stores. Aldi is even selling furniture now — maybe we should start selling Tim Tams!”

Matt Blatt is very much a family affair: husband and wife team Adam and Deborah are joined by their son Joel, who is the company’s general manager, and daughter Avril is also involved in the business through designing prints and rugs that are sold in store.

Both Joel and Avril would help out in the business during school holidays and Joel chose to combine his university studies in commerce with working full-time in the business to get invaluable, hands-on experience.

Adam says it’s “fantastic” to see his family involved in the business, but he never expected it. Equally, Deborah says she and Adam never really expected to find themselves in the position they are in today.

While Adam always knew we wanted to run his own business — “I have never worked for anyone in my life, I’m just not that type of person”, he says — Deborah describes herself as not business minded at all.

Deborah’s involvement in the day-to-day of the business happened almost by accident close to 20 years ago, after Adam asked her to come in to help answer the phone one day when a staff member needed time off for an operation. She was doing casual teaching at the time and so was able to help out, but once she was in, she “never left”.

“Maybe it was a coincidence, but after Deb came in, sales picked up,” Adam reflects. It was also around this time that the business spotted that typo that would form its name.

Deborah admits the prospect of working together each day was a “scary idea” at first, but the pair quickly found a rhythm — and some boundaries.

“One of the first days he asked me to make him a cup of tea,” recalls Deborah.

“I didn’t even know how he liked his tea as I’d never made one for him before! And I haven’t since!”

But there are aspects of running a business together where having no boundaries works too.

“We’ll have coffee together on a Sunday and read the papers, and then we’ll start talking about business. A lot of ideas come from the conversations we have,” says Deborah.

“The best ideas have come about over a cup of coffee,” says Adam.

NOW READ: “We’re better than all of them”: How Melbourne headphones startup nura is planning to be as big as Bose