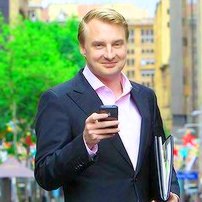 Social media and web presence act as the public face of a lot of businesses, including SR7, a firm which uses its analytics and experience to manage and advise businesses on their online image.

Co-founder James Griffin, 29, teamed up with his brother and two other business partners in 2009 to “pioneer” social media analysis in Australia.

It has been an interesting progression from start-up to gaining regular work through alliances with large firms such as KPMG and AON. Part of the early challenge was to inform potential clients about why social media analysis and maintenance was worthwhile. In 2013 it seems clear, but Griffin says in 2009 it was still an issue.

Small business is about taking calculated risks and pursuing those opportunities. If you’ve got the drive then give it a shot. Back in 2009 [our start-up] was right in the middle of the GFC.

People said we were either insane or knew something other people didn’t.

I think we were just pretty confident in seeing this emerging niche opportunity that is social media risk as opposed to what everybody would know now as social media marketing.

We have a core of seven staff which expands to 15. So we have a roster of contractors and part timers who come in to pick up work when monitoring might be after hours or there’s a lot of work on.

We’re big advocates for arts degrees which I guess is not something that people would hear often, I suppose. I’m an arts student and a lot of the team here are, and I think you learn a lot of soft skills that help you really understand what is going on in the world, and in a big part that’s social media.

You need to get your hands on smart, intelligent people who appreciate how the modern digital marketplace works, then train them in the way we do things here, making sure that the processes are repeatable.

A lot of the training was simply done here at SR7 and it was about building processes that are repeatable and easily digestible so that people can understand what they need to do in analysing and monitoring social media. Over the past five or so years there has been this new trade or skill that people have learned, and it really speaks volumes … about the growth of the social media economy.

The first two-and-a-half years, we weren’t only selling, we were educating [clients]. That got really tiring.

It’s only after you’ve said it 1000 times that the client or the marketplace will be hearing it for the first time.

Signing a lease is one of the biggest moments…that’s the one where you go, ‘it’s real now, we’re doing this’, and you meet it with fear and excitement.

The decision behind that was twofold. One was when the calendar of meetings got to the point where it was no longer viable to keep having meetings in coffee shops. The second was when we got enough clients to basically manage cashflow enough that we could plan and basically sign a lease.