From the Air Force to law to chief executive to board director: Leadership lessons from Dr Kirstin Ferguson 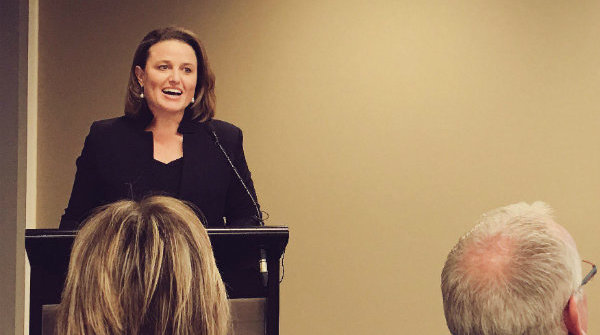 No one else at the all-girls private school she attended in Sydney had ever done it, but that didn’t deter Dr Kirstin Ferguson.

Neither did a careers counsellor who tried to discourage her.

At age 17 she entered the Air Force and began training at the Australian Defence Force Academy (ADFA).

“I loved the idea of being paid to go to university, and I thought it would be an adventure, which it was,” she says.

It wasn’t her first preference though: studying law at the University of Sydney was her first choice but she missed the entry by a few marks.

She was accepted into a journalism degree and offered a position at ADFA and had to make a choice.

“They were pretty extreme options that I was tossing up,” Ferguson says and laughs.

The military won despite the fact it meant signing up for seven years of service.

She vividly recalls attending the welcome ceremony with her parents in the old Masonic Centre in Sydney.

“You give an oath to the Queen and suddenly you are a member of the military,” she says. “Then we were put on a bus to Canberra with no idea what was ahead. Waving goodbye was pretty daunting.”

The initiations they were subject to from the minute they arrived were “as terrible” as we’ve all heard.

“You are immediately known by your surname and you are expected to understand military etiquette but of course you have no way of knowing because you’ve just arrived,” she says.

“From the very first hour, you are yelled at,” she added.

The first night was the only time Ferguson ever seriously doubted her decision.

“We could make a 30-second phone call and I rang my Dad who’d been to Duntroon. He said ‘don’t let the bastards get you down’,” she recalls. “It was the only time I cried. I wiped my eyes and used every bit of resilience and courage I had to stay.”

After that, she never looked back.

The first six weeks were intense and she says it resembled the scenes we have all seen in movies. There were drills, obstacle courses and lots of yelling.

“You become incredibly close with your classmates and you only succeed by working together,” she says.

Less than 10% of cadets were women in the early-1990s, and Ferguson says there were embedded attitudes that made the experience for women particularly difficult.

“Part of the culture at the time was to never report anything. Cadets would manage issues among themselves,” she says.

“It wasn’t until I left that I realised we were ill-equipped to manage serious issues.”

After the first six weeks, the cadets then started the university part of their training. 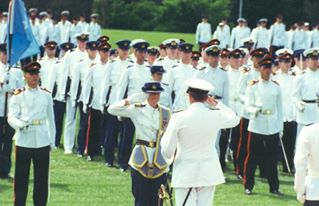 “You’re on the campus, so once the semester starts you are in a university routine with military etiquette,” she says. “You march to the lectures, for example.”

Ferguson recalls tutorials were run by civilians so you could occasionally skip those.

“You could never miss a military lesson though! We became cunning in working out the consequences for different things.”

Ferguson studied a Bachelor of Arts with honours in history, which meant she stayed for four years.

“By the time you are in third year, you’re in a hierarchal position. I was quite senior,” she explains.

“They had never had a female senior academy cadet captain. I was told I was close but they weren’t quite ready so I was the second top.”

She graduated as the dux of her Air Force class for academic and military performance. It’s an achievement Ferguson was and still is proud of, particularly because it was such a challenging environment. 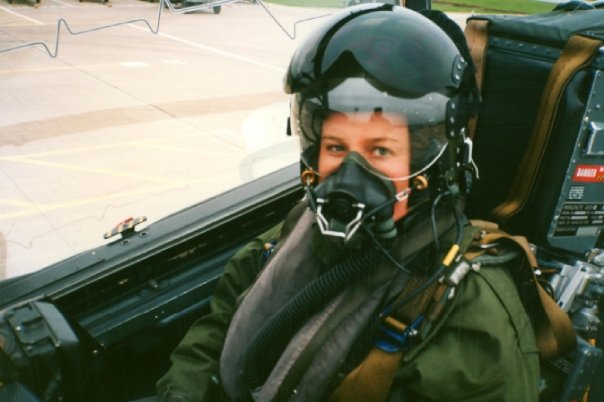 After graduation she was posted to an F-111 squadron at the RAAF Base Amberley in Brisbane. She was 21 and single when she arrived.

“Clearly I had watched Top Gun too many times though because I met my husband on the second day as he was flying F-111s …. and the rest is history on that front,” she laughs.

She was the only female officer in the Squadron and worked as an administrative officer. “I had sergeants working for me who’d been in the Air Force longer than I’d been alive,” she says. “Leading people who were far more experienced was a steep learning curve.”

Being offered leadership opportunities at such a young age is something Ferguson says is unique.

“I learnt more about influencing change, working cooperatively with others in challenging situations, the importance of teamwork and again, resilience, than I perhaps could have gained elsewhere,” Ferguson says. “I couldn’t have replicated those experiences in any other context.”

Ferguson had started studying for a law degree at this point through the Queensland University of Technology, and after seven years she left the Air Force. 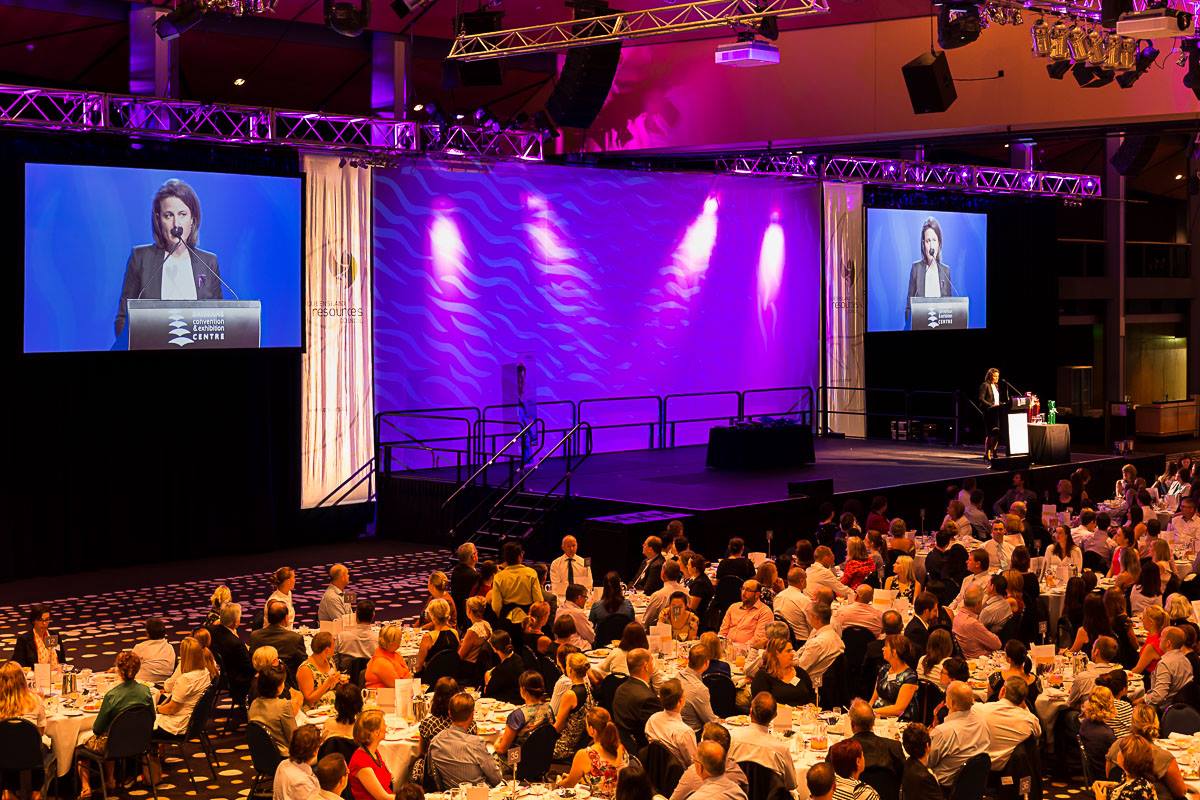 She moved into a management role in a large corporate law firm while she completed her degree and it was a “total culture shock”.

“I called my boss ‘Sir’ on my first day which he still teases me about,” Ferguson says.

In a law firm, there is a hierarchy but it’s top heavy. Even though there is usually a managing partner, there are a number of partners who are each, in a sense, the boss.

“In the military, there is a much clearer chain of command,” she says.

“In a law firm, it’s important to manage lots of stakeholders and understand that even though one partner isn’t in your chain of command they are still influential.”

The arrangement had always been that Ferguson would begin practising law after she finished studying.

“But once I finished the degree, and achieved my goal, I was far less interested in doing that,” she says.

“I really liked the breadth of my role, I was working with the chief executive officer, leading people and making things happen, and I didn’t want to let it go.”

It’s a decision she’s never regretted. During the eight years she worked for the law firm, Kirstin also had two children.

She was interested in running something herself when an opportunity arose.

“Seemingly out of left field I got an offer to move to a much, much smaller organisation which was, at the time, a growing consultancy providing cognitive-based safety training to the mining and resources industry around the world,” she says

Leading a team of psychologists was a massive culture shock again.

“I went from wearing suits with a PA and a lovely office — to wearing shorts and t-shirts in a startup,” she says.

It was immensely satisfying but required very different leadership.

“Trying to motivate people by money wasn’t the way to drive these psychologists. They were motivated by improving other people’s lives for the better,” she says.

“I had to tap into the intrinsic sense of wanting to help others.”

It was a fabulously successful business: BHP and Rio were their biggest clients.

As the chief executive, Ferguson travelled to mines across the world including an underground platinum mine in South Africa, coal mines here in Queensland, diamond mines in the Arctic and iron ore mines in the Kalahari.

It gave her a grounding for operational leadership and exposed her to new opportunities.

“During my time there I’d been offered a board role and I’d never sat on a board before,” she explains.

She trusted her gut and went for a board career.

“I went to 10% of my income overnight and I had to have faith in making it work.” 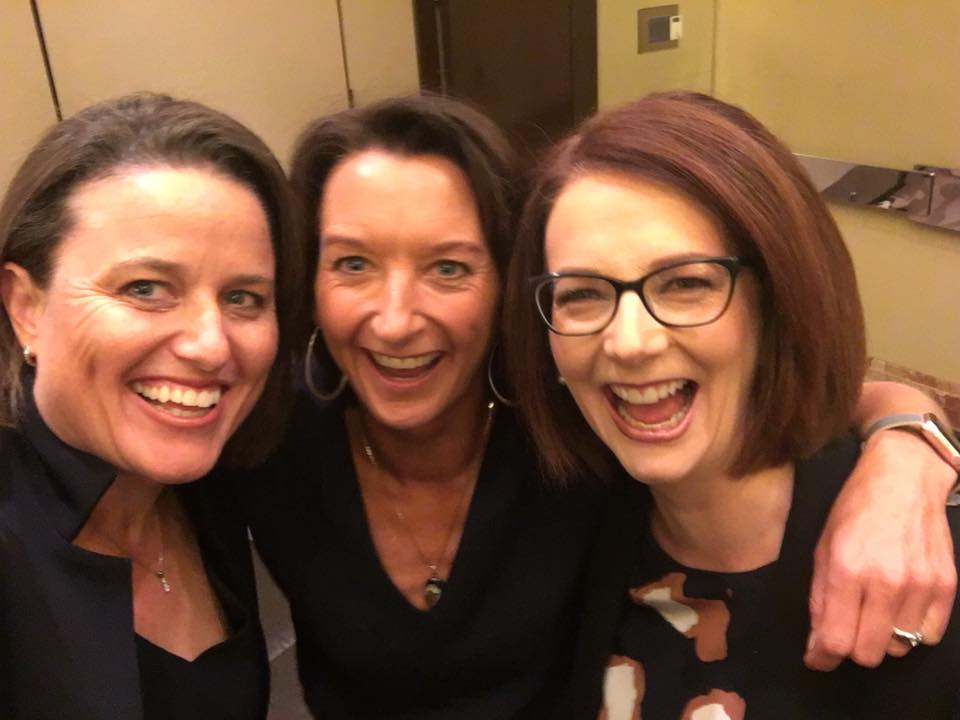 The difference between what a chief executive needs to do and what a board director needs to do is vast.

“When you are CEO it is all-encompassing. The scope of your thinking is around how to generate success for that business, in that industry, in that context,” Ferguson says.

As a board director, the role is very different.

“The breadth and context in which I consider issues as a board director has increased exponentially,” she says.

“You are considering multiple industries and competing contexts while making decisions. It takes some time to understand the difference between direct leadership and influential leadership to get the best outcome.”

Ferguson has been a full-time board director for almost 10 years now. Her current board positions include the ABC, SCA Property Group, Hyne Timber and the Layne Beachley Aim For The Stars Foundation, and she loves the diversity of her working weeks. 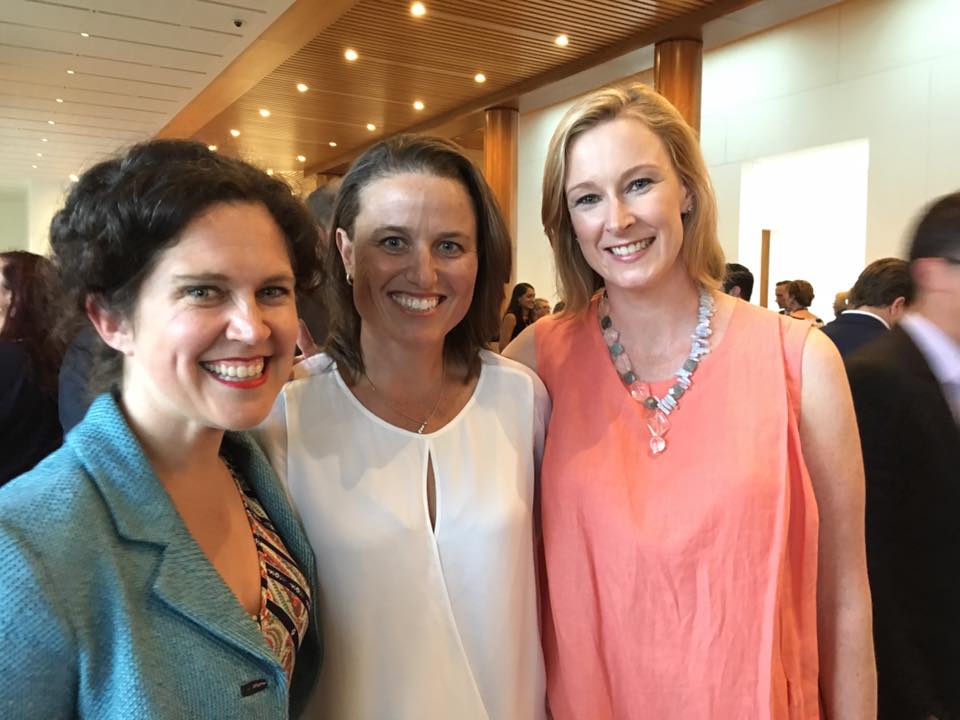 The 17-year-old who boarded that bus to Canberra wouldn’t have predicted this path or destination.

“At 17 I wouldn’t have known what a board was! Back then there is no way I could have anticipated where my career would lead, just as right now I can’t anticipate where it might lead and I’m comfortable about that.”

This year has been enormous for Ferguson. An idea that came to her at the beginning of this year to counter the online abuse so many women face, has grown into a global movement.

Using the hashtag #CelebratingWomen she committed to profiling two women on Twitter and Facebook every single day for the whole year.

The momentum it has created has exceeded Ferguson’s wildest dreams.

Your leadership is what makes you a good leader

“It’s taken me decades to feel confident in my own leadership. I am okay with my vulnerabilities. They make me who I am. Don’t feel there is a ‘type’ of person you need to be to have a board career or take a leadership position.”

The kids will be fine

“I was most indignant one day because one of our kids was sick and my daughter had asked the school to ring the nanny. I said next time someone is sick call me first.

“And then the next time they did ring me and it rang out because I was on a plane. I had to concede that it is probably wise to call the nanny first. It stuck in my mind because my initial impression was ‘I can do it all’. But I can’t. I try my best and I accept that’s okay and the kids are perfectly fine.”

Bring every experience with you

“I am a real believer in saying yes to opportunities.”

Funny, I cried on my first night in the Air Force as a 17 year old recruit and I have never cried about that decision since. Must be something about 17 year olds?