On a night in 2010, Alex Louey sat with friend and flatmate Nick Bell, having a beer and brewing up the idea for app-developing digital agency Appscore.

Having never thought of running a business before, but seeing Bell’s success with marketing agency WME, the two dove headfirst into launching the business, bootstrapping it off just $3000.

Today Appscore turns over $25 million and has landed partnerships with Telstra, Yarra Trams, and Samsung. The business today is robust, but there were early times when the company nearly went bust and the two felt like giving up.

Louey spoke to SmartCompany about the last seven years building Appscore, and why the co-founder “struggled” not drawing a salary for the first three years of the business.

I began Appscore in 2010 when I was working in the corporate space, in a fairly mundane sort of job. I just moved from company to company as a contractor — I didn’t feel inspired.

I was sharing an apartment with my current business partner and best mate Nick Bell, who had just started his company WME. We were just sitting there having a beer, and we said, “let’s build a company together”.

I never really thought I would be running my own business before then.

We started brainstorming about what we could do, and at that point apps were just in their infancy. We thought with our experience in digital and tech we could move into that space.

That as easy as it gets. We had an idea, and we rolled with it and started the company off 3000 bucks.

As a person, I like to do things quickly, despite the corporate background. When I worked in corporate I did so many presentations, talked about so much garbage, but delivered so little.

That’s why I took the chance and started Appscore.

We ended up getting some really talented computer science postgrads. 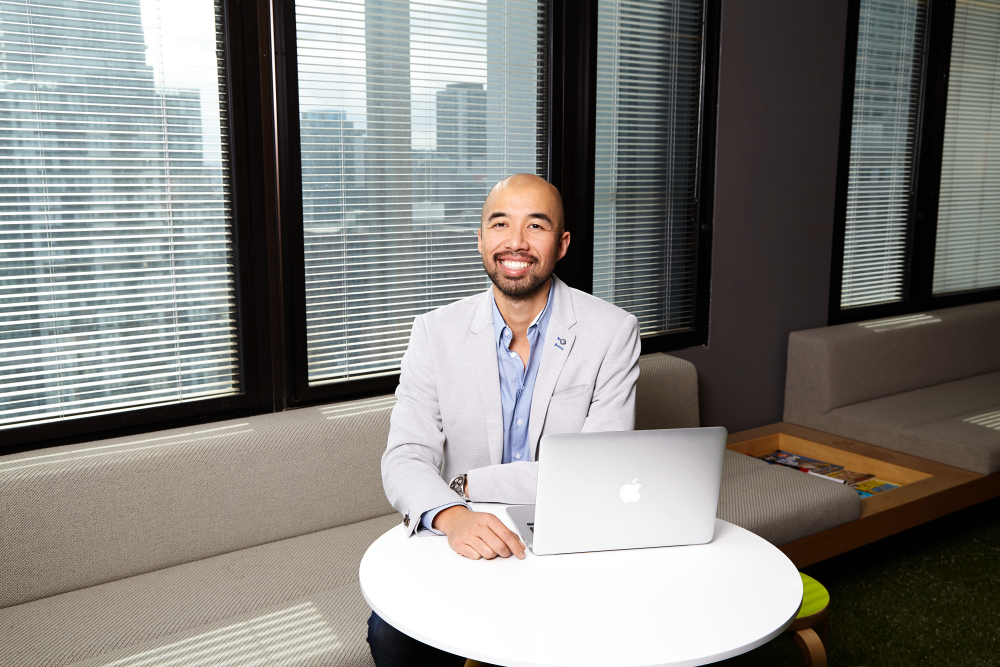 I didn’t draw a salary in the first three years of running Appscore, and that was a massive struggle. It took about eight months after we had the idea to actually put it into action, which gave me a bit of headway, but when I made the decision it was tough.

I didn’t work myself to the bone as you have to invest in yourself a bit or you become crazy, but I did miss out on a lot of trips and I ate out a lot less. I had some investments that brought in some money, but that went straight back into the company.

But doing this was the best decision and was so strong for the company. So many companies fail in the first 12 months, but for me that wasn’t an option.

If I couldn’t earn significantly over what I was earning as a contractor I would have never started the business.

I had to make it really big, or not do it at all.

I probably would have quit about three times if it wasn’t for Nick. He was very supportive, and this is why you have a co-founder in business because it’s often not smooth sailing.

About two years into the business, there was a point where things were going really well on the surface, but in reality, the business almost went bust.

We were hiring people, spending marketing money, and Nick and I had a corner office where we’d joke around and do some work while the guys outside were doing all the grunt work. We had started to lose contact with the company.

Sales were down and expenses were going up, and our CFO came to us and said we’ve only got two weeks until we literally run out of money. We got too carried away and forgot what it was like to be focused on the business.

We’ve never taken a dime of investment or any bank loans, so it’s not like we could just go ask the bank for more money. We had to hustle quickly.

We did some basic analysis and worked out our sales team had gotten a bit lazy because Nick and I weren’t at the coalface. They had no strong leadership, and the sales process was taking about four or five days — a long time in sales terms.

Boosting sales was the only way to turn the business around, so we automated and refined a number of our processes and went from four days to just one hour.

Having partnerships like [the one with] Telstra have made a massive difference to the business. When you’re trying to win big enterprise deals, customers always look for credibility, which somewhere like Telstra provides.

It ticks all the risk components and helps you get a leg in the door, but at the end of the day, you still have to deliver.

Before we got into the enterprise space we worked with a lot of small startups, as enterprise players viewed apps as very much a gimmick or a fad. They had one but it was never very useful.

It’s been a big transition to mostly enterprise customers but it’s been a good decision. Startups do a lot of fun stuff but they’re often not that well funded, and sometimes you’d ask for your $200,000 pay cheque and get a, “sorry bro, we’ve run out of money”.

The mobile app has become part of the digital landscape, from everything from social media to digital marketing. Companies’ mobile apps are now part of their omnichannel communication tools, for both customers and staff.

If a business doesn’t have a mobile app, I think they should. SMEs might not initially see it as essential, but as more and more large companies use it, customers are going to expect it from smaller players as well.

But businesses don’t have to invest in custom-made apps, there are some great off-the-shelf options that will create efficiencies both in and out of the business. Ask how it might simplify what you do — that’s how you have to see all technology.

For any business owner, the most important thing to do is watch your cash flow, because it can literally kill your business overnight. Keep your eyes on your balance sheet and watch your expenses.

You’ve also got to stay hungry, and if you want to start a business make sure you’re doing it for the right reason. Don’t do it just because your neighbour’s doing it.

Back yourself even if you make mistakes. The outcome won’t ever be as bad as you think.

Dominic Powell its a masterstroke. A step by step approach of what goes in starting any company, be it apps developement.

This point is the best “But businesses don’t have to invest in custom-made apps, there are some great off-the-shelf options that will create efficiencies both in and out of the business. Ask how it might simplify what you do — that’s how you have to see all technology”.

Here is a software that would solve problems of budding apps developers and anyone interested in a digital marketing company, a drag n drop app builder https://goo.gl/dCNZ74 and if anyone needs an app templates set this will help https://goo.gl/7vPWnT .