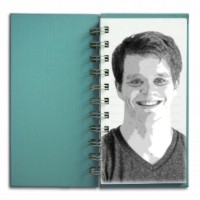 A combination of two loves, Mat Peterson started app company Shiny Things out of his passions for helping people and building things. Believing capitalism can be used as a vehicle for positive change, Peterson felt his entrepreneurial skills could best be used in the education space.

Previously Peterson had started a business called the App Factory which had focused on media management tools, but at the start of 2012 he closed the business to start Shiny Things and hired six employees.

Initially his greatest challenge was finding team members and even today he admits there are slim pickings in Sydney when it comes to people who know how to build apps.

The business is turning over $1 million, has reached 800,000 downloads of its mathematics apps and Peterson just hired his 12th employee.

Eventually, Peterson imagines Shiny Things apps being used in every classroom around the world.

“What attracted us to mathematics was that computers haven’t gelled with maths in the past and that’s partly been because of user interface problems,” he says.

Peterson aims to fix this problem and intends the apps to complement the teaching, not detract from it.

Speaking to SmartCompany,Peterson explains how important it is for tech companies to stay ahead of the game and how the internet is allowing his company to go global.

Peterson kick starts each day with an exercise session.

“It’s vital for someone who has to be as active as myself, performing different roles,” he says.

“After this I head to the office, check my emails and we have the daily stand-up meeting.”

After the morning meeting, Peterson’s day gets “messy”.

“Some days I’m networking, other days I’m looking after the current products or thinking about future apps. I also do quality assurance and I’m overseas a fair bit too.”

Despite being an Australian company, most of Peterson’s app downloads come from overseas.

“The United States is our biggest market, followed by Europe and then China,” he says.

“This is just because there are more people in these markets. We are capable of selling to an awfully large number of countries, in fact at last count we were up to 125.”

Demonstrating just how widely Shiny Things apps are downloaded, at one point one of its apps was ranked first in the Belize app store.

To maintain establish a positive image of the business, Peterson aims to achieve “great products with excellent reviews”, which are self-explanatory by name.

To manage the success of the business, Peterson doesn’t focus on metrics. Instead, it’s all about “what our customers say”.

“If we jump on the app store and see great reviews 99% of the time that’s great for us. Last week we saw a blog post from a teacher saying how the kids were using one of the apps in the classroom. And then the kids downloaded the app at home and were sending the teacher their scores.”