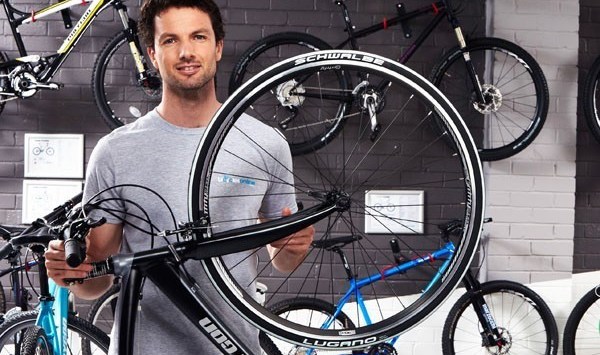 The online retailer sells complete bikes from Sydney and has a new online bicycle parts business arm that began operating out of Singapore about three months ago.

Born out of a Sydney bicycle tour company, Bicycles Online now boasts about 15 staff and last financial year turned over about $3.6 million, with van Rooyen predicting turnover of around $5 million this financial year.

Van Rooyen started the venture with co-founder Jonathon Allara about four years ago when he saw a gap in the market after initially starting a bicycle tour and rental business, Manly Bike Tours.

“Eight years ago, we would buy bikes all the time and we noticed how expensive it was to buy bikes here,” he says.

A trip to a bike show in Taiwan not only cemented the idea of sourcing cheaper overseas-made bikes for the tour company, but also presented the pair with an opportunity to sell bikes in Australia.

“So we brought in a 20-foot container full of bikes and sold it all very quickly.”

“We made a specific reason to do that to make sure we didn’t have to compete with overseas competitors, who were all very competitive with parts,” he says.

“We knew local retailers weren’t online and that’s where we got all of our growth in our early years.”

He says the bike industry had been one of the slowest markets to go online because most major bike brands had a network of dealers with contracts preventing online sales.

But where the pair identified opportunities they also saw risks, van Rooyen says.

“People aren’t familiar with buying a bike online. For some reason they see a pair of shoes online and feel more comfortable buying those than a bike,” he says.

Van Rooyen says his business had to make it easy for people to buy bikes online.

“We needed to educate the consumer, so we have 14-day test bike ride, if they don’t like it we’ll pick it up and offer free refund, that just shares the risk really and makes sure we’re on our game too,” he says.

“When you go into bike store you don’t have reviews at hand, no comparisons with other brands or bikes, or size charts. These were all the sorts of things we able to do online.”

Expanding into the bike parts business made sense with increased competition from other online retailers, as did starting another Sydney-based bike tour company, the one-year-old Sydney Bike Tours.

“It’s something we’ll put a lot more resources into,” he says.

Despite having four bike businesses under his belt now, van Rooyen says he considers himself more an entrepreneur than bicycle fan.

The Bicycles Online co-founder started out in the corporate environment, but said he always wanted to move from big to small business.

“I found myself working my way down into smaller and smaller business,” van Rooyen says.

“I wanted to do something with a business partner and isolated from bigger corporate competitors.”

Van Rooyen lives close to the beach in Queenscliff in Sydney and says he spends most mornings in the surf.

Mornings are also a chance for him to exercise and relax a little, with business in Singapore, a few hours behind Australia, often keeping him working until quite late the night before.

He can walk to his workplace in north Manly, and Van Rooyen’s business day usually begins around 9.30am or 10am.

His morning routine includes talking to “everyone”, tallying up the results from the previous day and “checking vital signs”.

Van Rooyen says “everyone” includes all 15 of his Sydney-based staff.

“That’s usually how I start the day.”

Van Rooyen tries to structure his day between his different businesses, but Bicycles Online is “really the focus”.

“At the moment I spend a lot of time working with suppliers to nail down supplier contracts,” he says.

“I try and work on the infrastructure side of the business, making sure all the systems are working, whether it’s IT or the service team and seeing what challenges they’re having.”

With someone else now managing the Manly Bike Tour and Sydney-based Bicycles Online, van Rooyen says he tries to schedule once a fortnight meetings with management.

“I probably head to Singapore once every six weeks,” he says.

Lunches with business partner Jonathon are more a standard affair, which usually serves as a bit of a debrief about how things are going for the pair.

Van Rooyen’s office day usually goes until about 6.30pm or 7pm but that’s not always the end of his work.

“When I get home I usually do at least another hour of work at home. I probably have a bit of an email-checking habit,” van Rooyen admits.

Along with paddleboarding, surfing, and trying to fit in a fair bit of exercise, van Rooyen also lists salsa dancing as a hobby he tries to do once a week.

Not surprisingly for an entrepreneur, there’s still a bit of work/leisure crossover.

“I usually try and catch up with reading, usually a business related or podcast that is business-related as well,” he says.

Asked about future plans for the business beyond the recent Singapore venture, van Rooyen is coy.

“I think that’s probably enough for the short-term, Singapore will be used as a base,” he says.

“There’s a strong possibility that either Jon or myself will be in Singapore soon.”