Clive, Frank and the love of the game

Does Frank Lowy know what he’s getting himself into?

The decision by the head of the Football Federation of Australia to cancel the licence of Gold Coast United would have been controversial regardless of who owned the club, but when the owner is Clive Palmer the word controversial doesn’t quite cut it.

“We intend to fight this ludicrous decision by incompetent FFA in the courts. Frank Lowy is an institution who now belongs in an institution,” Palmer posted on his Twitter account.

“I have the resources to go out and form a 10-team league of my own and maybe that’s what I will do. If Mr Lowy wants to take on my wealth against his, let’s bring it on.”

Palmer has been at war with Lowy and the FFA for some time now, but the spat has got worse and worse over the past few weeks.

Fed up with the poor performance of his team and the return on the $18 million he claims he’s pumped into the club in the last four years, Palmer has been loudly and publicly pushing for change at the top of the FFA, whose management he says is overpaid and incompetent.

The FFA responded by talking about taking Clive’s licence. So, on Saturday night, he sent his players out with the usual sponsor’s patch ripped off (coincidently he’s in another brawl with that sponsor, the Hyatt hotel chain) and a new patch in place with the words “Freedom of Speech” – a clear shot at the FFA.

“As custodians of the game, we had to act to protect the integrity of the Hyundai A-League on behalf of the other nine clubs, players, coaches and most importantly, the fans,” he said yesterday.

Palmer reacted with equal fury, claiming that the club were given no notice of the licence suspension and no chance to defend itself in an FFA hearing. He described Lowy as behaving “like a dictator”.

“I believe Frank Lowy has lost the plot…Mr Lowy will have his day in court. He will be cross-examined. We’ll seek to have the FFA’s records opened up over the multi-million salaries of their top executives.

“Frank Lowy has started this fight and we will finish it.” 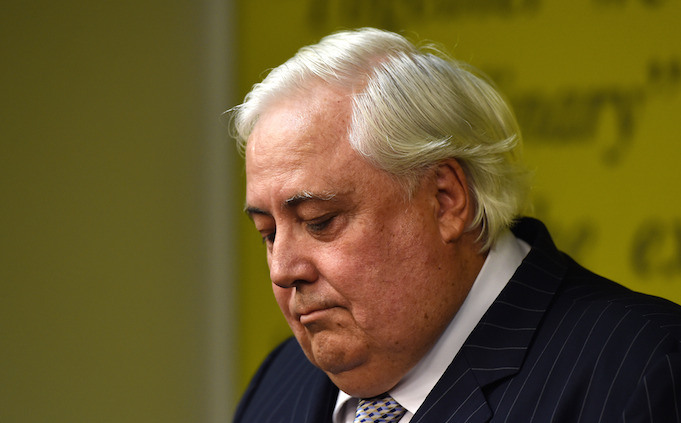 Clive is highly unlikely to make good on his threat to form his own league, but there is no question that he will launch legal action against the FFA and Lowy. There is principle and pride at stake here – and Palmer has a thirst for litigation (he’s won 68 cases out of 68, he claims) that he will be eager to quench.

While there will be plenty outside the soccer world willing to dismiss Palmer’s complaints as the ravings of a crazy billionaire, he appears to have the support of many other club owners – not surprising given Clive says they are all losing around $4 million a year.

Perth miner Tony Sage, who owns the Perth Glory, was quick to back Palmer’s calls for the clubs to have more say over the way the game is run.

“The truth is that Clive has been saying stuff in public which we have been discussing and largely agreeing with behind closed doors,” Sage told The Australian.

“We, as owners, agree with a lot of what he says. It’s just that we have our own way of getting the message across and don’t necessarily like the way he has gone about things.”

It is a good summary of the situation. While Palmer has his points about the administration of the league and the parlous state of club finances, Lowy is genuine in his wish to build a strong, sustainable soccer league in this country.

Lowy says his attempts to talk to Palmer have been rebuffed, but Clive has a point about the lack of formal charges or hearings. What processes were followed here? How was the decision to take Palmer’s licence made? Was there a way to avoid lawyers at 10 paces or was this the very last resort?

Lowy probably thought that kicking Clive out would end this matter and let the FFA move on. But Clive won’t let that happen – his love of the game is outweighed by his love of a fight.