Dreams and gaffer tape: Two Melbourne entrepreneurs take their business on the road 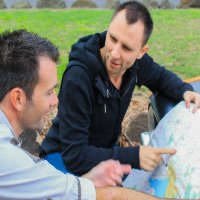 Jason Donald has lived the entrepreneur’s dream, sipping pina coladas on a remote island and running his global business from his laptop on a secluded beach. “It’s not that great after a while,” he says.

As one of the original co-founders of Sitepoint, life has been more than interesting for Donald since he gave up his stake in the company and opted for a life of travel and the chance to do his own thing. One of those things was setting up diyaudio.com, which gives him the income and mobility to pursue his passions, which includes chasing total solar eclipses.

But his biggest adventure may be yet to come when he and fellow Melbourne entrepreneur Julian Wilde, who runs wormly.com, take part in the Mongol Rally, an annual event that attracts more than 200 teams from all over the world.

It will see them drive more than 16,000km from London to Ulan Bator, Mongolia, in a semi-clapped-out 1.0L Daihatsu Sirion.

“In many places there will be no roads at all,” says Donald with a smile. “We’ll be running on ingenuity and gaffer tape.” The two plan to keep their businesses going during the adventure, though details on just how they’ll get internet connection for the trip’s entirety are still sketchy.

This trip is just one of a number of things that Donald has been ticking off his bucket list of things to do, but this roadtrip is more about just about an adrenalin rush.

Donald and Wilde are making the most of their mobility to raise funds for Cool Earth, a charity that works alongside indigenous communities to protect the world’s most endangered rainforest.

The team leaves from London, on July 20, and will make it across Europe to Ukraine, south along the Black Sea coast via Moldova, Romania, Bulgaria to Turkey, north again to Georgia before turning southerly again to Azerbaijan and then Iran.

From there they will continue across Turkmenistan, north through Uzbekistan, passing through Tajikistan and Kyrgyzstan before entering Kazakhstan.

Finally they will pass through central Russia before entering Mongolia to traverse the Gobi Desert and reach their final destination: Ulan Bator.

Will they make it? You can follow them here to find out.