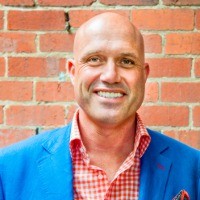 Tutton began the outdoor cinema push in Melbourne in 1996 with the Moonlight Cinema, a big screen set up in the Royal Botanic Gardens which showed classics and new releases. He sold it up in 2006 for $8.3 million and later became a director of Neometro, a property development company which in 2011 made the prediction to the Australian Financial Review that it would be posting sales of $100 million a year in 2013-14. Neometro builds high-end apartments in Toorak, South Yarra and Fitzroy, among the hottest property suburbs in Melbourne.

He also has an app called Smiling Mind, which aims to provide “mindful meditation” through iPhones and a website. Tutton is also a board member of the Australian arm of B Corporation, which applies a metric to companies based on their success in environmental or community strategies.

We’re far more interested in creating apartment buildings that are good to live in from an amenities, design and construction perspective and also make a positive contribution to streetscape and architecture and community. We’d like to do that while also making a dollar.

An idea that is evolving a lot in Australian business is where you’re seeing people who have businesses where their objective is to make money and to make a social contribution or environmental contribution or even as straightforward as providing employment for people.

One of the reasons why in Australia… we tend to gravitate towards assessing businesses on a financial basis alone is there’s a very clear metric for that in the form of a P&L statement or a balance sheet, whereas even if you place a big value on social contribution it is difficult to measure it.

In [rating his business through B Corporation] we end up with a metric that can be used to asses one’s contribution. At Neometro we’re two-thirds through audit.