Long, short, black, soy, caramel, magic, and even baby-sized — us Australians love our coffee. We can’t get enough of the brown bean juice, no matter how you serve it.

At least that’s what a couple of young entrepreneurs from Melbourne’s inner suburbs are banking on, with five-year-old business First Press hoping to bring cold-drip coffee to supermarket shelves across the country.

Hamish Walmsley and Jimmy Elias are the two minds behind the business, which first began out of a small kitchen in Port Melbourne in 2013 after Elias was inspired by a long trip abroad.

“I was travelling for a few years, essentially looking for a business idea to bring back to Australia. Hamish and I have known each other for 10 years, and we’d always had the idea of starting a business together,” Elias tells SmartCompany.

“I also had a keen interest in coffee, and when I was in the US I saw they had these full fridges of different cold brew coffee available to buy in stores, which really sparked my interest.”

Elias assumed cold brew had already hit the Australian market at that point but was surprised to find the concept was only being done in high-end cafes in cities such as Melbourne and Sydney.

“The only retail ice coffee you could buy was low quality and packed full of milk and sugar,” he says.

Cold brew coffee is more than just a cold cup of joe. Instead of taking hot coffee and making it cold, cold brew is made when coffee grounds are steeped in water for up to 12 hours, leaving you with a coffee concentrate which is often less bitter and acidic than standard coffee.

The two figured it was about time store-bought coffee options matched the high-end coffee tastes of many Australian consumers and hit the pavement with their glass-bottled brews, looking for retail stores and cafes who would want to stock their product. 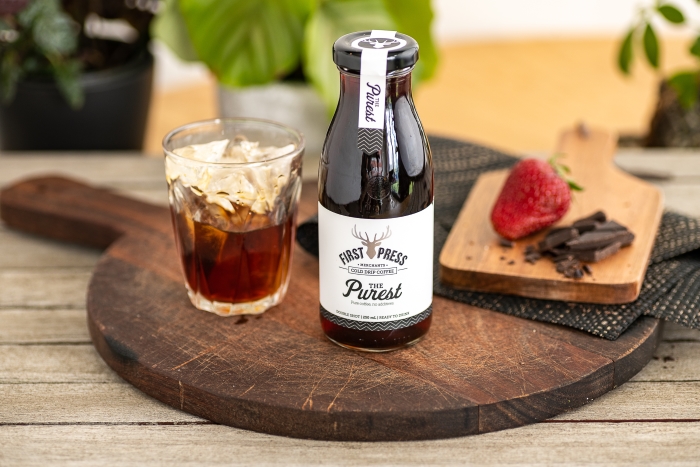 Australians slow to catch on to cold brew

Five years on, First Press coffee has grown significantly in size and is currently boasting a year-on-year growth rate of 50%. The two have stockists across the country, along with a subscription service in major Australian states.

The business was bootstrapped for the first four years, but last year the two raised a seed capital round of $600,000 from a group of investors which has helped them “skyrocket” their growth.

The cold brew coffee space has still been slow to grow. The founders say they didn’t have any real competitors in the market up until about two years into their business, and even now can only pick about four other “actual” competitors currently.

“A lot of people in the last five years have come and gone — the subcategory is still in its infancy. We haven’t seen the same growth in the market as there was in the US,” Walmsley says.

“Australia still has a very milk-based coffee culture. Health trends are beginning to change that, but we’re still explaining to a lot of people what cold brew is.”

First Press now operates out of a warehouse in Kensington, and the business has the unusual benefit of being located directly next door to its major supplier, Rumble Coffee Roasters.

Walmsley says the positioning doesn’t do much in terms of financial benefits for the company but goes a long way when it comes to getting the best tasting coffee for their brews.

“From a synergy point of view, it’s fantastic. We get to work closely with them to tailor our coffee, and there’s a huge benefit to that,” he says.

With many of their sales coming from independent supermarkets, health food stores and gyms, First Press is hoping to expand their retail channels throughout 2019, namely via the major supermarkets.

And despite the company being highly health-conscious, Walmsley says they’re also playing around in the pre-packaged espresso martini market, with the founders confident they’ve got a winning recipe.

“We’re sussing that out right now. We have a lot of health-conscious customers, so we’re testing out to see if that’s something they’d like,” he says.

“We’re also exploring talking to other distributors in Asia, as we feel we have a good product to take to that market.”

NOW READ: How Melbourne coffee brand St. ALi is getting into the education game