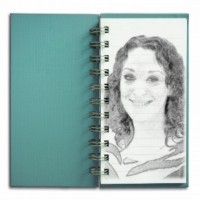 It takes guts to leave a prospering corporate law career to start your own business, but when Georgia Samuel was tired of looking for healthy, filling lunch options, she realised the only solution was to start her own business.

Samuel grappled with the idea of starting her own business before finally taking the plunge after six years as a corporate lawyer. But before totally letting go of her law career, Samuel’s husband convinced her to take a long holiday and see if it’s what she really wanted to do, when she was away from the stress and the pressure of the office.

After spending a few months in South America and Europe, Samuel spent most of her holiday planning the business. Two days before she was due to return to work, Samuel called her boss and said she was leaving to start a salad bar.

Understandably, her colleagues originally thought she was “nuts”, but they also recognised the value in her idea.

Samuel opened her first Famish’d store on Little Collins St in Melbourne in June 2010, and last year she opened her second CBD store.

The biggest challenge she encountered when starting the business was learning how to be her own boss.

“It’s not all that it’s cracked up to be. You work long hours, you don’t have the peers to bitch to about your boss and you don’t have anyone giving you accolades,” she says.

“At the start it’s very lonely and you don’t have anyone to bounce ideas off. You also have to learn how to get the staff to respect you without getting too close to them.”

One of her biggest mistakes early on was micromanaging, but when she had to take a break from the business to have kids, she realised she had to change her approach.

Now, Samuel has close relationships with her managers and has seen the business go from strength to strength.

The business is now turning over approximately $3 million and serves around 800 customers a day. SmartCompany spoke to Samuel about changing her management style, marketing tactics and running a business and a family.

Samuel currently works four days a week, once a week opting to spend the day with her daughter Mila.

“In the mornings I get up, get Mila sorted and taker her to childcare and then I go to one of the two stores,” she says.

“For the last few months I’ve spent a lot of time at the new store, but now in the past two weeks I’ve spent more time at our first store. I’ve always said the biggest mistake is the business growing and you neglecting your existing stores.”

To balance her time, she spends two days a week at each of the stores.

“I’m either running around and helping or observing and telling them what’s lacking in terms of customer service.”

When Samuel isn’t in the stores or looking after her daughter she’ll spend her time at home paying invoices and looking for store leases.

At the moment, she doesn’t see a need to hire anyone else to do the paperwork and administration tasks.

“Because I’m not as hands on anymore, I still want to be working. I don’t see the need or desire to hand those jobs over to anyone else,” she says.

However, she admits that might change as the business grows. At this stage, Samuel intends to open more stores by leasing new locations, but eventually she might consider a franchise model.

“I have considered franchising and in the very early days that was the idea. But I had a few mentors and I’ve spoken to different people and they’ve all said the more company-owned stores you have the better franchisees you’ll attract,” she says.

“The more company-owned stores you have, the more people will recognise it’s a proven concept and you’ll attract experienced franchisees – people with expertise, not just equity.”

Despite receiving advice early on to remain arm’s length from her employees, Samuel found when she got to know the managers she employed at a more personal level, her management style improved and the business’s growth accelerated.

“I stopped micromanaging when I decided to have a baby. I realised the business was either going to work without me, or it wouldn’t,” she says.

“I didn’t feel successful at the time because I was absolutely wrecked. I was so heavily involved, so exhausted and so time poor. The moment I felt like the business was successful was when I could sit down and have lunch.”

Samuel decided if Famish’d failed when she took time off to have a baby then she’d sell the company.

“I spent hours and hours training my two managers. My main manager has been with me since day one, and when I opened up and said I was going to have a kid it was a turning point for me. I was forced to stand back and it kept running well, if not better and kept improving.”

Samuel hired her first manager, Lauren, through a Seek advertisement before opening the first store. It was a challenge because she wasn’t able to trial Lauren “on the floor” as the store was yet to open, but the pair clicked and shared similar ideas.

“My second manager came in literally off the front step and she was the best thing to land on my doorstep. She had an appreciation for what you deal with as an employer… There’s lots to be said for just having chit chat.”

From the outset Samuel was strategic in choosing the store locations and consequently she hasn’t had to pay for marketing.

“I feel that it can devalue the business to have big advertisements and we just don’t need it. I’m aware the demographic we attract is generally young people between 30 and 40 who are active on social media.

From early days Famish’d has seen queues out the door every lunch time, and there’s not a day the lunchtime rush doesn’t fill Samuel with pride.

“The first time we had a queue at the Little Collins St store I remember thinking ‘what have I created here’, and now it’s happening at both stores. People stand in queues I wouldn’t stand in.

“The new store is located in quite a hidden new area and we were the first tenancy, but the growth has been completely rapid compared to the first store and I think that’s in part because of the name.”

Now, Samuel dedicates more of her day to working on the business than in it.

“I learnt my lesson with micromanaging and now I try to work on the business more. I work hard and don’t even think about the fact I spend half my Sunday working and paying wages and thinking of new recipes, but at the same time I can leave when I need to and go and pick up my daughter from childcare.

“I’m realising why I did this in the first place.”

Increased flexibility was one of the main reasons Samuel opted to start her own business.

“Now I’ve invested the hard yards I’m able to step away, leave early and go on holidays,” she says.

“My husband and I are big foodies. We love drinking wine and going out for dinner and hanging with friends. I also love exercising, I do spin classes and try and go four times a week, and just being with my girl.”

Looking forward, Samuel intends to open her third store shortly and has plans to grow nationally and possibly internationally.

“I guess that would be achieved through franchising so we can grow at a more rapid rate. I realise now that I can do it, I know the locations and I know how to do it,” she says.

To other entrepreneurs, her number one piece of advice is to respect your staff.

“They’re what’s going to make or break your business, so invest in them personally and show interest in them and their personal lives.”