From Masterchef to master of her own business: Marion Grasby’s tasty rise to success 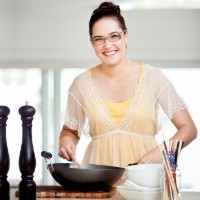 Marion Grasby admits there were some perks to being well known from the second series of Masterchef when it came to getting her business, Marion’s Kitchen, off the ground.

“In some ways it (celebrity) did help with the launch of the product, because we were able to generate PR that we would otherwise have had to pay for if I was an unknown person,” she says.

However, when it came to the nitty-gritty of developing her line of Asian cook-at-home products, such as finding manufacturers in Thailand, developing a supply chain and securing local distributors, fame did little.

“In terms of getting the business started we actually had to convince people that we were able to do it because, (they thought) I’m a reality TV show contestant, what do you know about business?” she says.

Grasby was a journalist with the ABC in Adelaide for three years before she plucked up the courage to leave and pursue a career in food. In 2008 she began a Masters of Gastronomy, before taking a break in 2010 to take part in mega hit television cooking competition Masterchef.

Grasby was born in Darwin, but she developed a passion for Asian food thanks to her mother’s Thai background. This became her signature style on Masterchef.

In 2011, rather than taking the path of hosting a cooking show or cooking on breakfast television as other Masterchef alumni have done, Grasby decided to delve into business.

Her then fiancé, now husband, Tim Althaus, decided to leave his job as a marketing manager for a South Australian winery, and join her in getting the concept off the ground.

“It was just going out there and making it happen, which was really hard at the

They ventured to Asia to source ingredients, and began perfecting recipes such as Thai green curry, or basil and chili stir fry, for which all of the ingredients are measured out and put into a take-home kit for people to make themselves.

There are now seven products in the range, but Grasby says more are in development. It’s a long way from the initial days, when retailers weren’t too keen to take a punt on an unknown product and inexperienced business people.

“For a lot of the big retailers, there hadn’t been a celebrity chef or cook who had started their own range of food, there had been a lot of endorsements of food, and apart from Maggie Beer there wasn’t really anyone doing that.”

To give retailers no reason to say no, she and Althaus put in the groundwork, finding the best manufacturers in Asia to create the products.

“We also had to work out our national distributors, so with our distributors, together we took our products to the major retailers, and it was then that we made significant investment in buying the product and having it manufactured.

“In that respect the risk was a calculated one because we knew that we would have an order, but we didn’t know how much we would be able to sell.”